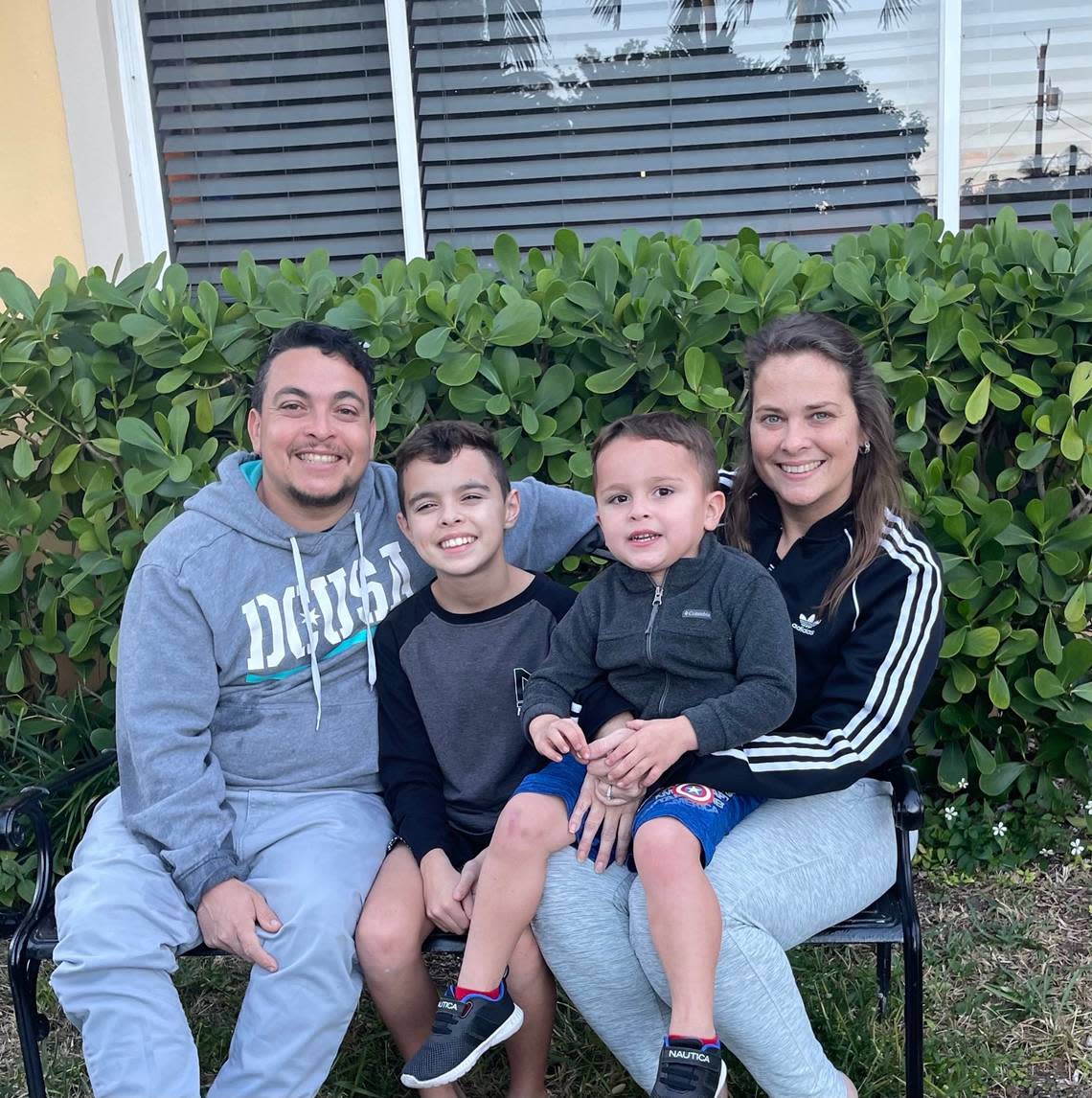 Donald Bravo was startled awake early one morning the week before Christmas by what sounded like a rock being thrown against the window.

When he went to check, he found his wife, who had fallen asleep on the living-room couch, on the floor barely breathing. He frantically searched for a cellphone to call 911 and then began CPR.

His otherwise healthy wife, Brettlynn Wolff, had tested positive for COVID-19 two days before. Wolff said she and her oldest son decided to get tested almost on a whim because the testing was free, nearby, and quick. They also wanted to be on the safe side since she worked as a teacher at Campbell Drive K-8 Center in Homestead.

Although Wolff, 39, had experienced none of the typical coronavirus symptoms, doctors would later discover her COVID-19 infection had brought on myocarditis, a severe inflammation of the heart.

By the time her husband found her, Wolff was in distress. “I could hear her having difficulty breathing all the way from the bedroom,” said Bravo, a Realtor.

Somehow, CPR classes he had taken when he worked with autistic children and as a safety officer on construction sites came back to him.

“I’m not a trained specialist but I did the best I could. All I could think was do chest compressions and get some air into her, but her jaw kept locking,” Bravo said.

For about 10 minutes, which Bravo described as “the longest 10 minutes of my life,” he kept at it, until EMS arrived at the couple’s Cutler Bay home and took over.

Paramedics heard the rapid heartbeat of tachycardia that can signal a heart attack or stroke, and they administered a therapeutic shock to try to reestablish a normal heart rhythm.

While Bravo stayed behind with the couple’s sons, 11-year-old Drew and 3-year-old Grayson, Wolff, who had no history of heart problems, was rushed to Jackson South Medical Center.

It was Dec. 18. Thus, began a five-week medical odyssey that doctors thought at several points might claim her life.

“The No. 1 hero of this story is Donald,” said Dr. Andrew Pastewski, ICU medical director at Jackson South. “He gave adequate CPR until EMS got there.”

Often, he said, family-initiated CPR isn’t done right. “Many people don’t realize how hard they need to push. They need to push down on the sternum a good two inches.”

Six minutes without adequate oxygen can cause permanent brain damage or even death, he said.

By the time Wolff got to the hospital, she was “posturing,” an involuntary flexing of the hands and feet that can indicate neurological damage, said Pastewski.

As soon as Wolff arrived, doctors put her on a ventilator, and began the hypothermia protocol, lowering her body temperature into the 80s to prevent further damage to her brain cells. The reduced temperature also decreases brain swelling and potential damage from cells killing each other off.

At this point, doctors didn’t know that the coronavirus might be affecting her heart. But the next day when they did a chest X-ray, doctors noticed a telltale patchy look rather than the excess fluid seen with pulmonary edema, said Pastewski.

“That made us think there was heart involvement, rather than pneumonia, which is the norm with COVID patients,” he said.

When the cardiology team, led by Dr. Juan Zambrano, did an echocardiogram, they found that Wolff’s heart was functioning at only 10 percent rather than squeezing out blood at the 60 percent rate that is normal.

“The whole heart wasn’t functioning rather than just a portion,” said Pastewski. The diagnosis: COVID-19 had caused severe global or whole heart myocarditis.

To assist the heart in pumping, Zambrano, Jackson South’s director of cardiovascular medicine, inserted two tiny Impella heart pumps through the arteries of each of Wolff’s legs. The Impella pump is usually just placed in the left ventricle, the heart’s main pumping chamber.

“Dr. Zambrano had never done two before,” said Pastewski. “The two pumps took over the work of the heart so it could rest and recuperate.” To do the surgery, doctors needed to bring Wolff out of hypothermia for a short time.

While they were hopeful the micro pumps would help, Wolff faced other problems. “She was in severe shock,” said Pastewski. “She needed three medications to keep her blood pressure in the normal range.”

Doctors concerned she wouldn’t make it

On the second day “things were looking really bad” and Pastewski recalled thinking “this was going to be another COVID case that wouldn’t end well.”

He’s seen plenty of those cases since the pandemic began. “To date we’ve lost 200 patients at this hospital,” he said somberly in late January.

On the third day Wolff’s prognosis was so poor, that her doctors presented the case that she should be considered for a heart transplant and hooked up to an ECMO machine, which pulls the blood out of the body, oxygenates it, and puts it back in.

Wolff was approved for both ECMO and as a candidate for a heart transplant, but Pastewski decided they should hold off for a few days to see how she did.

On the fourth day, Pastewski said when he went to Wolff’s room, he saw that her oxygenation levels had dramatically improved and the ventilator could do the job. Wolff didn’t need the costly ECMO treatment.

Another encouraging sign: she only required two, rather than three, medications for her blood pressure. Pastewski said Wolff also seemed to be making “purposeful movements,” an indication that she may not have suffered brain damage as they feared.

Then another complication arose. Her kidneys were shutting down and she had to go on dialysis.

Still, over the next few days Wolff made small improvements. Bravo said Dr. Zambrano phoned him on Christmas Eve with the first report of positive news.

“He said they had removed the pumps and her heart was working on its own,” said Bravo.

And the news just kept getting better. Bravo, who lost his mother to COVID-19 last year, said the evolution of his wife’s case was very different from his mother’s.

“She and my father drove to Mercy Hospital and she never walked out of that hospital. With my mom’s news, everything was bad,” he said. “With Brett, it was everything was a miracle.”

Brettlynn Wolff is shown with her care team at Jackson South Hospital, where she stayed for five weeks. Dr. Andrew Pastewski is on the left.

Importance of the heart pumps

When the Impella pumps were removed, an echocardiogram showed her heart was functioning at about 25 percent. “That was a rapid improvement and very encouraging,” said Pastewski.

“Without those pumps none of this is a good story,” he said. If Wolff’s heart had remained at 10 percent capacity, “it would have kept trying and trying until it died.” Fortunately, he said, Zambrona was able to get the pumps in quickly enough.

On Dec. 28, Wolff got off the ventilator and was able to talk to her husband and sister on FaceTime.

“I was still out of it. I couldn’t really process,” said Wolff. “The first thing I said when I woke up was: ‘Where are the presents? I need to wrap the presents for Christmas.’”

Christmas had passed as she hovered between life and death, but her family and the hospital staff were willing to settle for a belated gift as she awoke.

“There were a lot of tears,” said Pastewski. “When Brettlynn was awake and talking to her family, it was just amazing. She’s my miracle case.

“What struck a chord in me was the similarity with my own family,” he said. “My wife is around the same age and I also have two young kids. I kept telling Donald, ‘I’m going to get her home.’”

“I really want to thank the doctors, fire rescue, the whole ICU team, the nurses. They treated her like she was one of their own,” Bravo said.

“The doctors were amazing – not just in their knowledge but in an interpersonal way,” said Wolff. “They were very dedicated and invested in our family.”

COVID-related myocarditis is a rare complication, said Pastewski. Until Wolff, he said, he has never seen a patient survive with it.

But he’s hopeful the procedures pioneered at Jackson could save other COVID patients with myocarditis complications.

Wolff spent another four days in the ICU, before being sent to a room on the floor. As the days ticked by in her hospital bed, Wolff said her greatest concern was “I couldn’t walk anymore.”

Around day 30 she entered a rehab facility where she got three hours of occupational and physical therapy a day.

On Jan. 26, she went home with a walker, which she now says she barely needs. She no longer requires dialysis. Her heart function is normal again.

The week before she came home, she woke up with foggy vision. Tests showed fluid in a layer of her eye that doctors said might have been caused by the steroids she was taking or her low blood pressure, said Wolff.

They told her they hoped it would drain in four to six weeks. Otherwise, they said there was nothing they could do to improve her vision, said Wolff.

Images show the fluid is decreasing and she said her vision is improving. “That is another blessing,” said Wolff.

Because of the pandemic, Bravo was only allowed to see his wife once during the more than five weeks she was treated.

Effects on the children

It fell to him to be Mr. Mom, his wife said, and deal with the trauma of the couple’s youngest son who came into the living room when Bravo was giving his wife CPR.

“He told me: ‘You were sleeping on the floor and then you were dead, and then police came,’” said Wolff. While she was in the hospital, the little boy was very angry, but his father gave him extra attention and he finally came around.

When the family came to pick Wolff up from the rehab center to go home, “he touched my cheek and said, ‘Mommy, you’re better,’” said Wolff.

Grayson, 3, was traumatized and reacted angrily when his mother went into the hospital. Extra love and attention from his dad brought him around.

Bravo said he still relives the night he almost lost his wife in his dreams. “When I hear ambulances or police sirens, I think they are coming to our house,” he added.

Concern about returning to school

Wolff said some of her students at Campbell Drive K-8 Center where she teaches gifted classes have asked when she is coming back to school. She doesn’t think it will be this year.

“Mentally I’m a bit foggy and I’m still weak,” said Wolff who resumed physical therapy at a nearby facility the week after she got home.

But she admits after her ordeal, she is scared to return to the classroom. Wolff believes she caught the virus at school. “We haven’t gone anywhere, we haven’t done anything since the pandemic, so I have to think it was at school,” she said.

“Teachers whose lives should not be taken are dying. At the end of the day, I was a healthy person, but you just don’t know how your body will react to the virus,” she said, “so I’m scared, scared, scared. It’s just the unknowns.”

But with time, Pastewski said, Wolff is expected to make a “100 percent full recovery.”

A GoFundMe page to help Brettlynn Wolff has been set up at https://www.gofundme.com/f/brettlyns-recovery