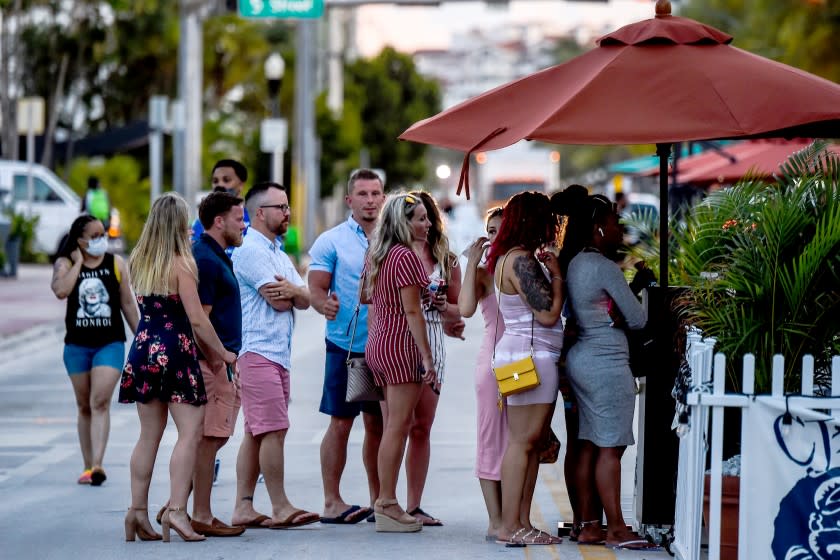 The longer the COVID-19 pandemic goes on, the younger its victims get.

A new study from the Centers for Disease Control and Prevention reports that the median age of people with COVID-19 in the U.S. has declined over the spring and summer, with Americans in their 20s now accounting for more cases than people in any other age group.

The findings suggest that if the U.S. wants to get its coronavirus outbreak under control, it will need more cooperation from young adults.

The proportion of cases among Americans in their 30s also increased in June and July. But by August, it had fallen slightly below the level seen in May.

Meanwhile, the share of cases among adults 40 and older decreased steadily through the end of July, according to the study.

The trend toward younger COVID-19 patients came as the total number of new cases increased. In May, 604,570 Americans of all ages were diagnosed with COVID-19. By July, that figure exceeded 1 million — a 71% increase.

The CDC researchers who produced the report drew on three kinds of data: They tallied confirmed cases of COVID-19 in reports from state health departments, examined data from the National Syndromic Surveillance Program to identify patients who went to hospital emergency rooms with COVID-19 symptoms and analyzed coronavirus test results from 37 states.

The trend toward younger patients was evident in all three data sources, the researchers said.

Over time, these infections in younger adults appeared to spread to older, more vulnerable adults in certain parts of the country, the researchers wrote.

This sequence of events offers “preliminary evidence that younger adults contributed to community transmission of COVID-19 to older adults,” the researchers wrote. “Similar observations have been reported by the World Health Organization,” they added.

There are several plausible explanations for why this might be the case, the CDC team wrote. Younger adults are more likely to work in restaurants, stores, child care centers and other places that put them at greater risk of exposure to the coronavirus. At the same time, they may be more cavalier about social gatherings and more lax about the need for physical distancing.

Also, the fact that younger adults are more likely to have mild COVID-19 symptoms or even asymptomatic infections means they’re more apt to spread the virus without even realizing they’re sick.

The median age of people with positive coronavirus test results began falling before there was a drop in the median age of all people who got tested. That essentially rules out the possibility that the observed drop in patients’ ages can be chalked up to more testing by younger people, the CDC team wrote.

The findings underscore the need for health officials to target younger adults with “age-appropriate prevention messages” about the importance of preventing COVID-19 spread, the study authors wrote. (Paul Rudd, are you listening?)

The study was published Wednesday in the CDC’s Morbidity and Mortality Weekly Report.