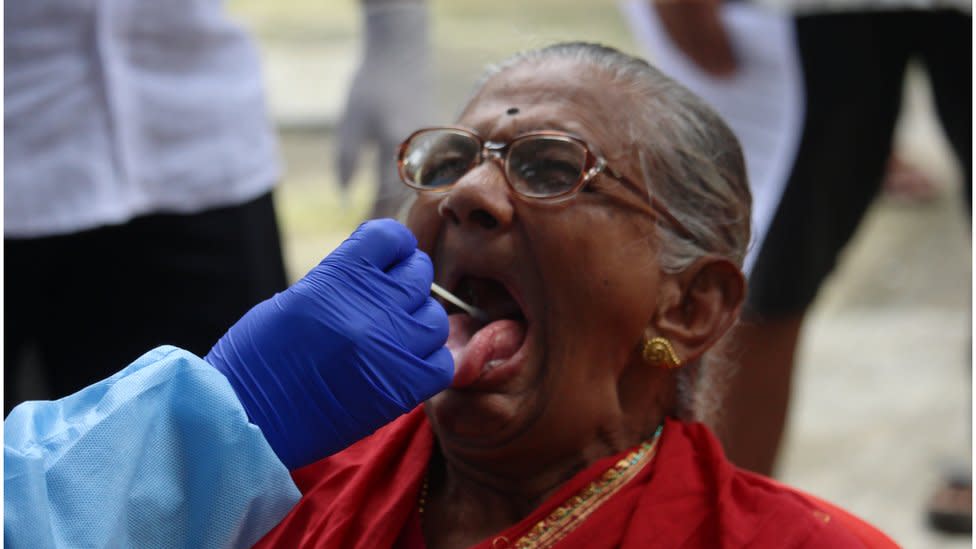 Rajesh Kumar, 45, started coughing in early June. Within days, he was running a high fever.

He didn’t get tested for coronavirus. Instead he took anti-fever medication for five days. But the fever persisted, and soon he had difficulty breathing.

His family asked him to get tested, but he refused. His rationale was that there was no way he could have contracted Covid-19 because he had hardly stepped out of his house in Delhi, and he had not met anybody who had the virus or was even suspected of having it.

Eight days after the symptoms first appeared, his condition deteriorated. He was rushed to hospital, where he tested positive.

“I survived, but doctors told me that any more delay in hospitalisation could have cost me my life,” he says.

Mr Kumar hasn’t been able to track the source of his infection and is still unsure how he caught it.

Experts say there are many such cases – proof that “full-blown” community transmission is happening in India.

India’s healthcare system has struggled to cope with rising cases

But the government refuses to accept that community transmission has begun, saying there is no clear definition of the term, and each country can define it based on local conditions.

So far, Kerala and West Bengal are the only two states to accept that they have entered this stage.

But global understanding on the subject is simple: when the source of infection can’t be traced in a large number of cases, it’s safe to define it as community transmission.

The WHO’s guidelines say the same: “community transmission is evidenced by the inability to relate confirmed cases through chains of transmission for a large number of cases”.

This is certainly happening in India, according to Dr Arvind Kumar, chairman of the Centre for Chest Surgery at Delhi’s Sir Gangaram Hospital.

He says that more and more patients are turning up at hospitals whose source of infection cannot be traced. And, he adds, the rising case numbers support this.

India has recorded more than 1.2 million cases and nearly 29,000 deaths.

“These stats don’t lie,” Dr Kumar says. “You have state after state where infection rates are going up rapidly. There is no point in denying what is right in front of you.”

But the government disagrees. A top doctor from the Indian Medical Association (IMA) recently acknowledged that India was in the community transmission phase, but the IMA retracted the statement two days later, saying it was the doctor’s “personal opinion”.

The turnaround baffled many.

Virologist Dr Shahid Jameel says the government needs to listen to doctors and experts, and acknowledge the evidence.

There is no denying that the virus is more widespread now than a month ago. More states – such as Andhra Pradesh and Bihar – and more districts beyond dense urban areas are now reporting a surge in cases.

Many of them were not prepared because they largely relied on quarantining and testing people coming from other states to halt the spread. But they did not take enough steps to curb the spread locally.

Even the former strategy had gaps, because it’s not possible to completely man porous borders between states. And many states also lack the means to track and test each person entering their territory.

Dr Jameel adds that there was a sense that the virus could be contained within big cities and certain hotspot states, preventing it from reaching other parts of the country.

“That hasn’t happened and now Covid-19 is spreading unchecked,” he says.

The virus is travelling fast, often leaving no trace to establish the chain of transmission.

Dr Jameel points out that the government’s own survey showed that 40% of the respondents who had respiratory illnesses did not know how they got sick.

“We have enough evidence to accept there is community transmission,” he says.

But experts say this didn’t happen overnight. Rather, it happened over several weeks as the government continued to deny it.

“We had localised community transmission in early stages of the pandemic. But now it’s spread across the country, it’s there for everybody to see,” Dr Kumar says.

Thermal scanning is mandatory in many places now

So why is the government so reluctant to accept the obvious?

Experts say they “can only guess” since the government hasn’t said much on the matter, and has not released an official definition of the term to support its stance.

One reason could be that the government sees accepting the existence of community transmission as a failure of its policies.

The government can’t be blamed for community transmission, argues Dr Jameel, adding that it needs to be more forthright with data and accept what science proves.

He adds that community transmission is often a possibility with such a highly infectious virus in densely populated countries like India.

Denials only add more pressure, say experts, and spark an unnecessary debate around the topic.

And the argument is pointless now, according to leading epidemiologist Dr Lalit Kant, who has worked with the government.

He says “we have to keep improving our strategy”, whether we call it community transmission or not.

“India is a large country – you may control the virus in one state and then another state will flare up. So, we really don’t need a definition to understand the ground reality,” he says.

“It’s getting worse, and that is the harsh truth.”

India’s coronavirus policy has largely focused on test and trace

The WHO says “individual case identification, contact tracing, and quarantining are no longer necessary” in a “large-scale community transmission scenario”.

Instead it advises countries to focus on tracking the geographical spread of the virus through data and deploy healthcare facilities accordingly.

Dr Kant says it’s possible that the government may not want to announce a shift in policy at the moment.

Possibly because it’s taken months for governments – both federal and state – to ramp up testing, and to implement test and trace protocols. The other challenge is that the pandemic is in different stages in different parts of India, which makes it difficult to overhaul the policy altogether.

“But it still doesn’t justify their constant denials. They need to say what their long-term approach is or what their definitions are about community transmission,” he adds.

The public has a right to know, Dr Kant says, and the government should be transparent.

A brand new coronavirus variant has been tied to at the least 90 infections in a lethal outbreak at a medical middle in San Jose, California

Fauci says it is ‘unlikely’ there might be a coronavirus vaccine earlier than the US election, regardless of the CDC asking states to be ready by November