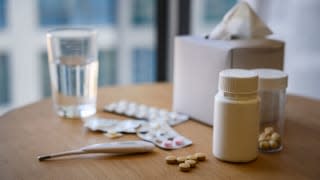 Consumer Reports has no financial relationship with advertisers on this site.

If you have recovered from a COVID-19 infection, probably the last thing you want is to get the virus again. And until recently, you may have thought or hoped that once you had the disease, you were protected—like you can be from, say, chickenpox.

But scientists have long known that immune protection can be shorter with some viruses than others. And reports of people being reinfected with the coronavirus, along with the emergence of several variants that appear to be both more contagious and more dangerous, have sparked worry that for some people, a single bout of COVID-19 may not be their last.

For people who got COVID-19 in the past year, “the question will be, ‘Will they still have immunity, and will that immunity work against the variant strains?’ ” says Aaron Glatt, MD, chair of the department of medicine and chief of infectious diseases at Mount Sinai South Nassau in Hewlett, N.Y.

A year into the pandemic, the Centers for Disease Control and Prevention says that reinfections are rare but possible.

Here’s what you need to know about reinfection, including how to avoid a second COVID-19 infection.

Reinfections Are Uncommon, But Variants May Make Them More Likely

In the first several months of the pandemic, reinfections appeared to be uncommon, though researchers did document a few cases. One of the first confirmed cases in the U.S. was a 25-year-old Nevada man who tested positive for the virus in April 2020 and again in June, according to an article in The Lancet. And last October, five residents of a skilled nursing facility in Kentucky appeared to be reinfected after having contracted the virus in a July outbreak there.

But the rise of variants is making experts worry that reinfections could become more of a concern.

The most alarming evidence of that comes from Brazil, particularly from the city of Manaus. Research suggested that over 70 percent of the Manaus population had been infected with the SARS-CoV-2, the virus that causes COVID-19, by the fall of 2020. That was enough to potentially provide community protection or herd immunity, according to Peter Katona, MD, an infectious disease specialist at the David Geffen School of Medicine at UCLA in Los Angeles. Yet in December, infections in the city surged, reportedly overwhelming the health system.

This onslaught was likely caused by a SARS-CoV-2 variant known as P.1. It can evade some of the antibody responses induced by prior infection and potentially reduce vaccine effectiveness, according to virologist Andrew Pekosz, PhD, a professor and vice chair of the department of molecular microbiology and immunology at the Johns Hopkins Bloomberg School of Public Health in Baltimore, who spoke at a Johns Hopkins briefing on viral variants in February.

Such an increase in reinfection and serious illness in an area where it was thought there had been enough infection to achieve herd immunity is “a nightmare scenario,” Katona says.

In addition to P.1, there are at least two other variants of concern spreading in countries across the globe: B.1.1.7, first discovered in England, and B.1.351, first found in South Africa. All three have infected people in the U.S. And these variants may be more transmissible, more likely to cause severe disease, or better at evading the antibodies generated by vaccination or a previous infection. Some have a combination of these traits. Other variants have recently been found in the U.S.

And as long as the virus continues to spread rapidly around the world, reinfection remains a possibility. That’s because the higher the number of people infected, the more opportunities the virus has to pick up new mutations that could potentially cause a lot of people to get sick again. “Controlling the case numbers is going to be the most critical thing we do to lessen the likelihood of variants emerging in the population,” Pekosz said.

While a previous infection, either with the original virus or a variant, almost certainly provides some protection, reinfection is possible. And some people may be more vulnerable than others.

That includes older people. A new study in The Lancet found that people younger than 65 who already had COVID-19 had roughly 80 percent immunity against reinfection. By contrast, for those ages 65 and older, protection dropped to 47 percent. That may be because immune function tends to diminish with age.

Other people with a weakened immune system also likely face an increased risk of reinfection, Katona says. That includes cancer patients or people who have received an organ transplant.

Just as with infection, your risk of reinfection increases the more viral particles you are exposed to. That’s why experts recommend that people who have had the disease continue to take precautions to limit their exposure.

“Even if you’ve had COVID, you’re not Superman,” says Glatt. “You cannot walk around and say you’re at zero risk.”

Because of this, researchers say that after recovering from COVID-19 you should continue to wear a mask when out in public, keep your distance from other people, wash your hands, and try to limit interactions to well-ventilated or outdoor spaces.

There’s another reason to take those precautions after having the disease: You may have been reinfected and be able to spread the disease but not have any symptoms. And COVID-19 can be spread by asymptomatic people.

Roughly one in six people with COVID infections are asymptomatic, according to one estimate from Australian researchers. And asymptomatic reinfections may be underestimated because there’s little screening of people with no symptoms, said Akiko Iwasaki, PhD, a professor of immunobiology at the Yale School of Medicine, in a commentary on the significance of reinfections in The Lancet.

Getting Vaccinated May Help Prevent Reinfection

Even if you’ve had COVID-19, you should consider getting vaccinated as soon as you are eligible—especially if you’re 65 or older. Early evidence suggests that protection from vaccines is stronger and longer lasting than what you get from a prior infection. Also, vaccines used in this country still appear to be effective against P.1 and other known variants.

Still, either because immunity wanes with time or some variants may be able to evade the protection provided by a vaccine, it’s possible people may eventually need boosters against new variants.

And just as people who previously had the disease should wear a mask and follow social distancing practices while out in public, so should people who have been vaccinated.

Read more about what you can and can’t do after being vaccinated.

Lecturers in identical Arizona classroom all get coronavirus, 1 dies