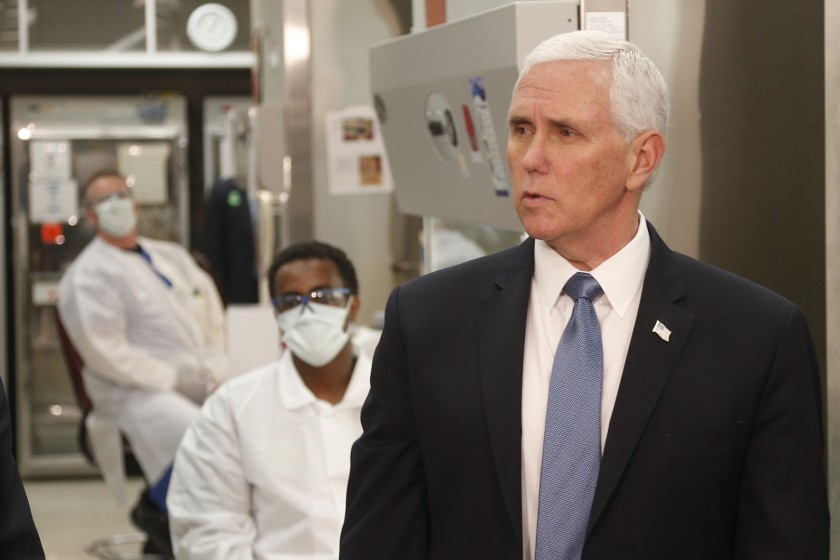 Vice President Mike Pence confirmed to reporters on Tuesday afternoon that the White House might look to close down the special coronavirus task force he’s been leading, possibly in early June.

Well, there are a couple of explanations.

“It really is all a reflection of the tremendous progress we’ve made as a country,” Pence said. “The president stood up the White House coronavirus task force … to marshal a national response.”

“And as I’ve said before,” Pence continued, “as we continue to practice social distancing and states engage in safe and responsible reopening plans, I truly believe — and the trend lines support it — that we could be in a very different place” by late May or early June.

Fantastic. Except for those other reports that government predictions suggest 3,000 deaths per day by June, a 70% increase over the current daily tally, and a separate analysis suggesting the number of COVID-19 deaths nationwide could double to 135,000 by August. That comes as states — including California — begin loosening restrictions.

Then there’s the political explanation.

By closing down the task force, the White House would shift the visible responsibility for the fight against the coronavirus from the president to federal agencies, including the Centers for Disease Control, the National Institute of Allergy and Infectious Diseases (led by Dr. Anthony Fauci) and the Federal Emergency Management Agency, as well as to state governments and elected officials.

Doing so would position Trump to head into the summer — and the early scale-up of the fall election cycle — not as the near-daily host of the coronavirus task force update briefings, but as the president who handed off the problem to federal agencies.

He could then claim success if the pandemic does indeed die down, or run against those very agencies if the pandemic worsens or stages a rebound in the fall, as some experts suspect will happen.

He could then try to claim that he had the problem under control and the rest of the government messed it up. Yes, Trump is trying to angle himself to turn the coronavirus to his political advantage (nothing new there).

That would put Trump in his favorite role — as the aggrieved victim of the “deep state,” the entrenched government establishment and the “hostile press,” which in his view (or in his cynical lie to his base supporters) is in cahoots with Democrats to stifle the revolution he has been leading, and which stands in the way of his mission to “keep America great.”

That would give our dishonest president a platform from which to claim he needs to be reelected — to finish the job hardworking (and sometimes xenophobic) Americans sent him there to do. Namely, blow it all up … er, drain the swamp.

But what, you ask, of the health and the security of the American people?