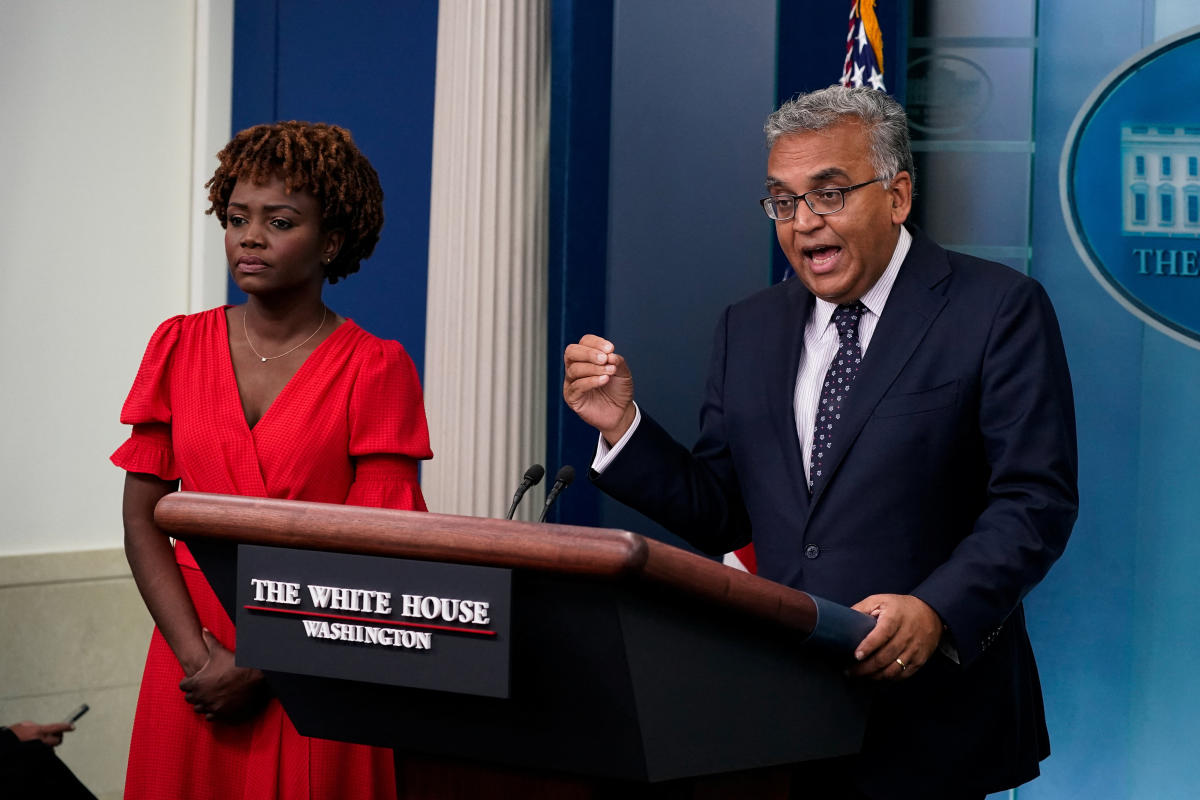 WASHINGTON — The White House moved to reassure Americans on Thursday that President Biden is suffering from only a mild bout of COVID-19 and that, while he will undergo the necessary five-day isolation, the business of governing will go on as usual.

He added that Biden was so intent on continuing with his daily duties that he had neglected to eat. “I encouraged him to finish his breakfast,” Jha said, projecting an optimistic mood about the 79-year-old president’s health.

Biden had been scheduled to travel to Wilkes-Barre, Pa., to discuss public safety. The trip was canceled. The president’s weekend plans — he was to travel to his beloved beach house — have also apparently been canceled.

White House press secretary Karine Jean-Pierre said Biden started feeling fatigued on Wednesday evening, after returning to Washington from a trip to Massachusetts to deliver remarks on climate change. A letter from the president’s personal physician on Thursday morning — when news of his infection was announced — described him as experiencing a runny nose, fatigue and spells of dry coughing.

Because the president is vaccinated and has been administered two booster shots, he is expected to make a full and relatively quick recovery. “His risk of serious illness is dramatically lower” as a result of being vaccinated and boosted, Jha said.

Still, he has begun a regimen of Paxlovid, a relatively new treatment that has become increasingly available in recent months and is highly effective at preventing serious disease and illness. While on Paxlovid, Biden will stop taking Eliquis, a heart medication, and Crestor, a high-cholesterol drug.

In recent weeks, coronavirus cases have been rising as the Omicron subvariant known as BA.5 has spread across a nation where masking has become a matter of personal choice and other restrictions have been lifted. The administration has argued that the wide availability of both vaccines and treatments allows for people to return to pre-pandemic activities like travel, even if their risk of exposure increases as a result.

Even though there have been successive coronavirus waves throughout 2022 — all driven by increasingly infectious Omicron subvariants — Biden has increasingly participated in large gatherings, including the White House Correspondents’ Association gala in May. He has also begun to travel regularly, returning from a trip to the Middle East late last week.

Jha acknowledged that BA.5 is highly contagious but could not say whether that was the variant the president had contracted. Sequencing of the president’s viral strain could take several days.

Biden spent much of the 2020 presidential campaign sequestered at his Delaware home. He had avoided several encounters with the coronavirus throughout his presidency, but there was a feeling within the White House that it was only a matter of time before he contracted the pathogen.

“We knew this was going to happen,” Jean-Pierre said during Thursday’s briefing.

She said the president’s symptoms were similar to those of a common cold. “It’s not a fever,” she said with seeming exasperation. “It is not a massive headache. It is a runny nose and a dry throat — which many who do not test positive for COVID have.”

Already defensive about reports about the president’s age and fitness to serve in an exceptionally demanding office, the White House moved quickly on Thursday to show him going about his affairs.

“It’s going to be OK,” Biden said in a video recorded in the White House residence and shared on the presidential Twitter account. The video was shot outdoors; Jean-Pierre said the videographer was masked, as was a photographer who snapped an image of the president working at his desk.

Then-President Donald Trump contracted COVID-19 in the fall of 2020. Top officials in his administration tried to conceal the seriousness of his condition, even after he was rushed to Walter Reed National Military Medical Center for treatment after the content of oxygen in his blood dipped to dangerously low levels.

Jha said that while Walter Reed is always ready to treat a president, he foresaw no reason that Biden would have to receive care there. “His oxygen level was checked this morning,” Jha said. “It was normal.”

Now the White House has to undertake the laborious task of reaching out to the president’s close contacts, including the several members of Congress with whom he spoke aboard Air Force One on Wednesday. For the most part, however, Jean-Pierre strove to reassure the public that the West Wing would continue normal operations, even as the president was sequestered in his own quarters.

Neither she nor Jha could say where first lady Jill Biden would stay while her husband isolates. Presumably, accommodations can be found in one of the White House’s 132 rooms.

Still into question: Did Corona an animal derived disease