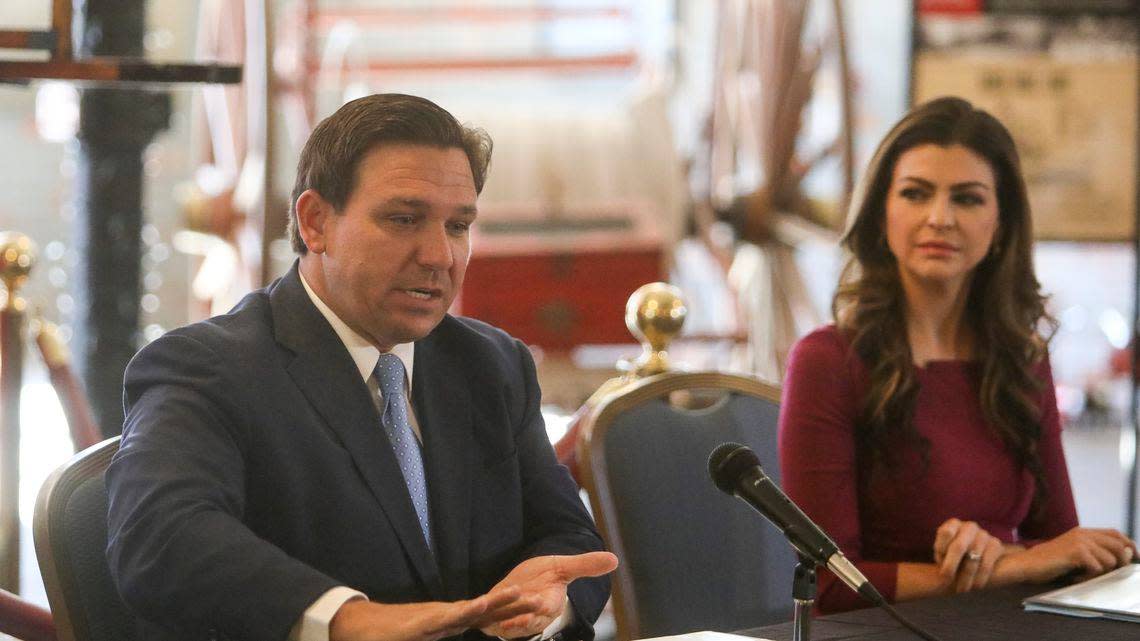 A White House Coronavirus Task Force report about the state of the pandemic in Florida made public Saturday urges state leaders to take immediate action to slow the virus’ spread. Officials should close or severely limit indoor dining, limit capacity at bars and issue stronger policies around mask wearing, the report states.

Those are the same public health measures that Gov. Ron DeSantis has publicly assailed for months as ineffective. While he was making the case for no new business restrictions, DeSantis’ office refused to publicize reports from the task force which recommended a more robust public response.

The Dec. 6 report, which was obtained by the Center for Public Integrity, is one in a series of weekly reports which the governor’s office has refused to regularly provide news organizations. The Miami Herald has not received any of these reports from the governor’s office.

To what depths has Gov. DeSantis sunk to please President Trump? Secrecy, deception and even a raid | Opinion

The White House task force, which consists of top federal health officials and is led by Vice President Mike Pence, contradicted DeSantis’ public messaging in a number of ways in its Dec. 6 report. The Republican governor has ruled out any further business restrictions aimed at curbing the spread of the virus, arguing such measures do not work and harm the economy.

But the task force made the case that such restrictions do slow the spread, and recommended the state to step up its policy response to the virus.

“Despite the severity of this surge and the threat to the hospital systems, many state and local governments are not implementing the same mitigation policies that stemmed the tide of the summer surge; that must happen now,” the federal report reads.

During Florida’s summer surge, DeSantis’ administration prohibited drinking at bars, but did not go as far as some states are now going to discourage public gatherings. DeSantis often says that Florida’s hospitals weren’t overwhelmed even during the worst of the summer outbreak, but some facilities faced staffing shortages as admissions surged.

When asked whether the DeSantis’ office was refusing to issue the reports because they contradicted the state’s top official, the governor’s office did not respond.

The task force’s Dec. 6 report notes that, compared to other states, Florida appears to have fewer cases than some of its peers — many of which have implemented economic restrictions. The Sunshine State had the 41st most new cases per 100,000 residents, and just the 33rd highest rate of positive cases in the country as of the date of the report.

However, the report cautioned that “rankings are almost irrelevant as the entire country is surging.”

Florida reported 10,577 new cases on Saturday. This is just one day after reporting 11,699 new cases on Friday — the most since the state’s summer viral surge.

DeSantis has noted several times in recent weeks that a number of private vaccines are hitting the market starting as soon as next week, providing hope for the country’s ultimate recovery from the pandemic. But the task force report cautions that it won’t be until “late spring” that enough Americans are vaccinated to substantially lower the risk of viral spread.

Through the winter, when respiratory diseases like the coronavirus thrive, a “significant behavior change of all Americans” will be needed to slow the virus’ spread, the White House report said. Anyone who gathered outside his or her home for Thanksgiving should presume they are now infected, according to the report. People with pre-existing conditions and those over 65 should have groceries and medications delivered to their home. Masks should be worn at all times in public.

“Begin warning about any gathering during December holidays,” the report reads in bold text.

If DeSantis read the report, he is not modeling the behavior recommended. On Friday, he appeared with his family at a high school football game. He tweeted a picture of himself standing beside his wife, Casey, and with two of their children in front of a crowd of hundreds of spectators.

The vast majority of the people in the photo, including the governor, were maskless.

Don't Miss it GOP Congressman-elect calls the coronavirus pandemic ‘phony’ whereas rallying with Trump supporters in DC
Up Next People are stockpiling cleansing provides once more, although analysis suggests COVID-19 doesn’t primarily unfold by surfaces. Consultants say that is okay.