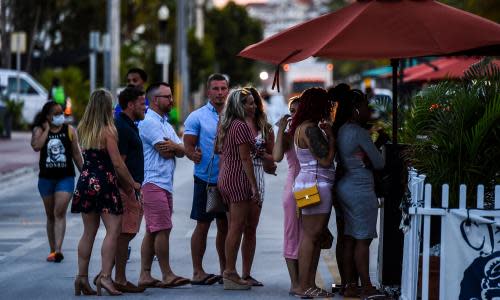 The United States reported a record number of new coronavirus cases as it headed into a holiday weekend. Health officials and experts attribute the rise in cases to reopenings across the country, uneven use of masks and increased travel. Three experts discuss what they have learned about coronavirus transmission during reopenings – and urge caution over the upcoming holiday weekend.

Where has reopening in the US been successful and where has it led to a surge in cases?

Saskia Popescu: Washington state reopened over the course of several months. In Arizona, where I live, we started allowing elective surgery on 1 May and let our stay-at-home orders expire on 15 May. This was very, very quick. [Editor’s note: In Washington, cases are slowly rising, whereas Arizona has seen a more dramatic increase.]

As a state reopens, you really want to see consistent decreases in cases over about two weeks. You want to take an incremental approach, to make sure that you’re not getting a bunch of new cases and obstructing public health.

What are we learning about transmission as cities and states reopen? What activities are high-risk versus low-risk?

David Rubin: Clearly, indoor bars have been a huge part of this outbreak in terms of transmission. Closure of bars, particularly during the current wave of the epidemic, would be very helpful.

Popescu: We know going to the bar is high-risk. We’ve been saying this since February. Going outside for a walk or a picnic is a lower risk. As we learn more about asymptomatic transmission, that really stresses the importance of mask-wearing.

Karan: Indoor transmission is significantly higher than outdoor transmission. At the peak of [Boston’s] epidemic, most of the cases I saw were people who had [confirmed] Covid-19 cases at home. We know that the workplace is high-risk because they’re not really designed for an epidemic.

The vast majority of us in public health expected a spike from the protests, even though we knew they were critically important. The lack of that [surge] speaks to the fact that masking works and being outdoors helps a lot.

Do you think states are going to have to go back into full-on lockdowns?

Popescu: People view it as a dichotomy – you’re either open or closed. Right now is a really good time to focus on communicating risk and harm reduction; you can still run errands or see a friend or two and do it safely.

Karan: Lockdowns are not a strategy – they’re an emergency backstop that represents a failure to stay on top of the outbreak. The strategy out of this is one of using personal protection, like masks, tests, tracing and quarantining.

Rubin: Places like Texas, Florida and Arizona might need to pause – meaning going back to quarantine and only allowing carry-out from restaurants – for a few weeks to get case counts down and let healthcare facilities start to recover.

Rubin: More young people are represented in the cases, which will bring down your aggregate fatality. Second, we may be getting a little better at treating the disease.

The worry there is people will become complacent, and then in the fall, we’ll see both transmission and fatality go up again. That’s what happened in the 1918 flu pandemic.

Popescu: Part of this is that mortality rates are a lagging indicator, but I’m also hopeful that as we detect more cases, they’re of less severe disease.

Will new infections inevitably spread to places like New York, which has significantly reduced its number of cases?

Rubin: What’s really concerning is that this week, after all the hard work that the north-east and the midwest did – they waited the longest to reopen – their risk of transmission is going up. That includes New York.

People are talking about Florida, Texas and Arizona, but we’re also seeing elevated activity across the I-90 corridor in upstate New York. The Chicago area is also heating up again. These areas we had touted as successes might get engulfed and consumed by surrounding risk and travel from high-risk areas.

What this shows is that we needed a national response to meet this challenge.

There was a surge in cases following Memorial Day weekend – when many Americans traveled for the first time since the lockdowns began. Are you concerned about the upcoming holiday weekend?

Popescu: Arizona closed bars for 30 days, and the governor has [urged caution] going into the weekend. But then President Trump is hosting an event at Mount Rushmore where you can’t socially distance and masks haven’t been encouraged. It’s hard when you have competing messaging.

Rubin: Clearly [the current surge in cases] began after Memorial Day, when travel resumed. And now we’re adding an explosive cocktail in the middle of a deteriorating situation. It’s very concerning.

Dr Fauci’s warning about the potential for 100,000 new cases a day was conservative.