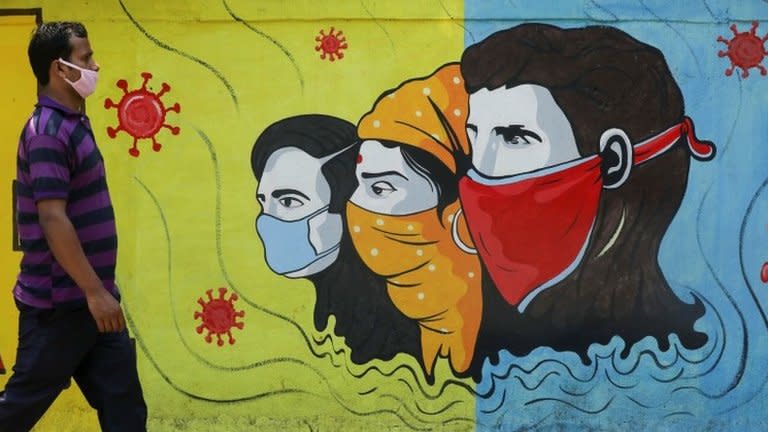 A new “double mutant” variant of the coronavirus has been detected from samples collected in India.

Scientists are checking if the variant, where two mutations come together in the same virus, may be more infectious or less affected by vaccines.

What is a “double mutant” variant?

Like all viruses, the coronavirus keeps changing in small ways as it passes from one person to another.

The vast majority of these mutations are inconsequential and don’t alter the way the virus behaves.

But some mutations trigger changes in the spike protein that the virus uses to latch on to and enter human cells – these variants could potentially be more infectious, cause more severe disease or evade vaccines.

Vaccines against respiratory pathogens like SARS-Cov2, the virus that causes Covid-19, protect us by stimulating our bodies to make antibodies.

The best type to protect us are the “neutralising antibodies” because they block the virus from being able to enter the human cells.

Indian genome scientists have detected a so-called “double variant” of the novel coronavirus.

The government said that an analysis of the samples collected from the western state of Maharashtra showed “an increase in the fraction of samples with the E484Q and L452R mutations” compared with December last year.

“Such [double] mutations confer immune escape and increased infectivity,” the health ministry said in a statement.

Dr Jeremy Kamil, a virologist at Louisiana State University Health Sciences Center Shreveport, says the E484Q is similar to E484K – a mutation seen in the B.1.351 (South Africa) and P.1 (Brazil) variants, which have emerged independently several times.

If enough mutations happen in a viral family tree or a lineage, the virus can begin to function differently and the lineage can become a so-called ‘variant of concern’.

As far as the L452R mutation – also found in the “double mutation” in India – it first got attention as part of B.1.427/B.1.429 lineage in the US, which is sometimes called the “California variant”, Dr Kamil told me.

Are such “double mutants” rare?

Not at all, says Dr Kamil, who recently co-authored a study of seven growing lineages of the novel coronavirus in the US.

“It is now extremely common to see more than one mutation at once – even if we limit ourselves to the spike gene.”

Earlier in the pandemic, most spike genes had only one mutation – D614G. Now that mutation is dominant and everywhere, “so we see others on top of it”, according to Dr Kamil.

In fact, GISAID, an open sharing database, lists 43 viruses that have both the E484Q and L452R mutations found in India.

Once the Indian researchers upload their data to GISAID, scientists from around the world will be able to determine whether the “double mutant” is the same lineage as the one found in the UK, or whether this combination of mutations independently emerged, as was the case for the K417N/T, E484K, and N501Y trifecta of mutations that came together in Brazil and South Africa to give rise to their strains, P.1 and B.1.351.

How worried should we be about the new variant?

Mutations in the spike gene can make the virus inherently “better” at infecting people or can help the virus to escape neutralising antibodies.

This means if the virus mutates in the “right way”, it can re-infect someone who has already recovered from Covid-19.

But scientists say reinfections will be very mild compared to primary infections in people who are vaccinated or who recovered already from an earlier case of COVID-19.

But if the virus can use reinfection to spread, then it would be “penetrating” herd immunity, says Dr Kamil. (Herd immunity happens when a large portion of a community becomes immune to a disease through vaccination or through the mass spread of the disease.)

This puts the most vulnerable people at risk of severe disease, since the virus can move through the herd to reach them.

He says unlike some other variants, India’s new double variant is not likely to be more deadly or more inherently transmissible, but that more data is needed to be sure..

Is the variant the reason behind India’s second wave?

India reported 47,262 cases and 275 deaths on Wednesday – the sharpest daily rise this year.

Dr Rakesh Mishra, director of the Hyderabad-based Centre for Cellular and Molecular Biology (CCMB), told me that the “double-variant” had been found in 20% of the cases in Maharashtra, which has seen a huge spike in reported infections.

“One suspicion is that this variant is the cause of the India’s second wave of infections. I would say no, 80% of the samples we have sequenced tested don’t have this combination of mutants. This mutant has been linked to only 230 cases in Maharashtra of the several thousand samples sequenced,” he said.

A number of states have reported a sharp uptick in infections

Much more worrying is the UK or the Kent variant (also known as B.1.1.7), now dominant in much of Britain and has spread to more than 50 countries. A total of 736 of the 10,787 samples sequenced in India have been found positive for this variant.

This variant is more likely to contribute to an “intense second wave”, says Dr Kamil. (According to studies, it is over 50% more transmissible and 60% more lethal – 1.6 deaths for every one death caused by the previous version of the virus.)

“However, mostly it is going to be human behaviour that drives a second wave,” says Dr Kamil.

Nationwide Parks Are Getting Trashed Throughout COVID-19, Endangering Surrounding Communities