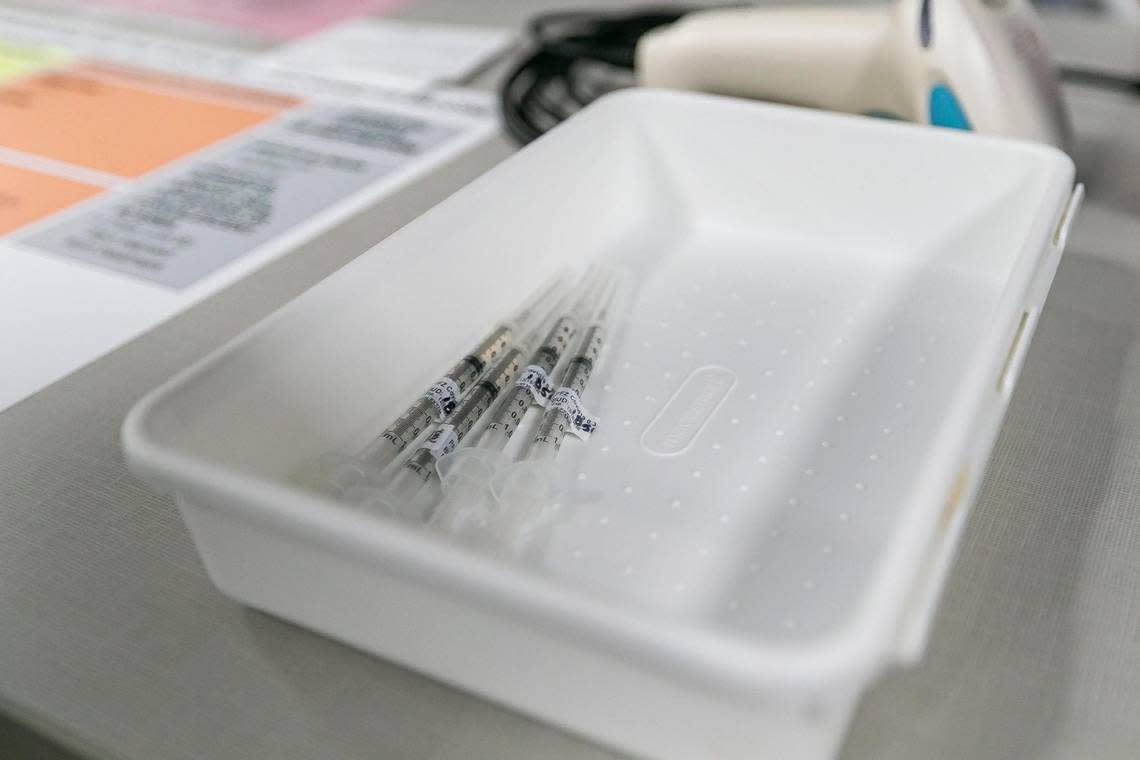 At Mount Sinai Medical Center, the phones have been ringing almost without stopping since the Miami Beach hospital announced Wednesday that it would follow a new directive from the Florida governor: Vaccinate senior citizens against COVID-19.

Mount Sinai has been scheduling about 800 appointments a day — except for Christmas Day — starting with people over the age of 75. The appointments run through the next several weeks, with the hospital inoculating about 260 people per day on its campus overlooking Biscayne Bay.

The growing demand comes after Gov. Ron DeSantis announced last week during a visit to The Villages retirement community that the state would push to vaccinate seniors 65 and older ahead of essential workers. The first doses of the two federally authorized COVID-19 vaccines arrived two weeks ago in Miami-Dade and Broward counties.

Previously, front-line healthcare workers had been the top priority in the state.

But on Monday, many seniors remained in the dark about how to get the shot, even as nearly 123,000 people in the state had received their first doses of the vaccines as of Sunday.

They weren’t the only ones. Even Florida’s dentists, a healthcare profession widely recognized to be high risk, lacked clear direction from the state on how to procure a vaccine for themselves and their staff members as of Monday.

The directive from the governor followed reports in the Miami Herald that hospitals were widely allowing administrative workers and virtually any employees who still physically worked in their facilities to obtain the vaccine.

The shift in approach by the governor has led to distribution methods that vary by county and hospital. On Monday, seniors in Lee County on Florida’s West Coast lined up for hours after officials there announced the shots would be given on a first-come, first-served basis.

Mount Sinai was the first hospital in South Florida to announce its shift toward seniors, but other large hospital systems in South Florida appear to be following suit, with Jackson Health System, Miami-Dade County’s public hospital, planning to vaccinate the same age bracket in the coming weeks. Baptist Health of South Florida said it is similarly developing its own plans.

“Obviously there’s a tremendous amount of demand,” said Steve Sonenreich, CEO at Mount Sinai hospital. “We’re trying to take that on and do that in as orderly a fashion as we possibly can.”

Sonenreich said about 80 percent of the hospital’s patients live outside Miami Beach, and “that statistic still holds up with this vaccine.” Mount Sinai did not have the total number of seniors vaccinated so far available on Monday. Appointments for the shots can be made by calling 305-674-2312.

Jackson, along with Memorial Healthcare System, the public hospital in South Broward, both received about 20,000 doses of the Pfizer-BioNTech vaccine, sharing the bulk of it with other hospitals but retaining enough doses to vaccinate virtually all employees who wanted one.

Those decisions were made largely by the hospitals themselves, and before DeSantis expanded the state’s first phase to include senior citizens and people with severe underlying conditions in the general public.

Dr. Stephen Fredd, an 87-year-old former regulator at the U.S. Food and Drug Administration now in Fort Lauderdale who raised concerns about a lack of clear strategy to vaccinate the public in late November, said he’s had no luck getting an appointment through his hospital, Holy Cross Health. Fredd was one of many senior citizens who contacted the Herald to express his frustration with the lack of clarity on how to schedule an appointment.

“The situation that is going on is, as I feared, very chaotic,” he said.

The uncertainty Monday about vaccine availability extended to dentists.

The American Dental Association said Florida is one of the few states that hasn’t clarified where in their priority list dentists fall, despite dentistry being widely recognized as a high-risk healthcare position.

But in response to a question from the Herald, a spokesperson for the Florida Division of Emergency Management in charge of vaccine distribution said dentists were included in the first phase and should contact their local hospitals about receiving a dose.

“Oral health is essential to a person’s overall health,” said Dr. Andrew Brown, president of the Florida Dental Association, in a statement. “Florida dentists are ready and willing to receive the vaccine to help ensure that patients throughout our state can continue to access dental care necessary for maintaining their oral health and preventing dental emergencies.”

So far, Miami-Dade’s county government isn’t planning to convert COVID-19 testing sites into vaccination centers. Rachel Johnson, communications director for Mayor Daniella Levine Cava, said Monday that the state’s health agency plans to use clinics and healthcare facilities for immunizing the older residents that are next in line after healthcare workers and some first responders.

“The Department of Health is developing and launching the plan for vaccination of the general population age 65 and up. They are planning to launch vaccinations for that group at Miami-Dade DOH clinics and through other healthcare partners,” Johnson said in an email.

The Miami-Dade offices of the health department told the Herald on Monday that, when they do open COVID-19 vaccination clinics, appointments will be necessary.

Miami-Dade’s Fire Department has a supply of vaccinations for firefighters and paramedics across the county, Levine Cava said in an interview over the weekend. “That is being administered directly by our fire department,” Levine Cava said on WPLG’s “This Week in South Florida.” “After that, the county is going to focus on older people and vulnerable people until that vaccine is used up.”

Docs stumble on surge in agoraphobia because of COVID-19