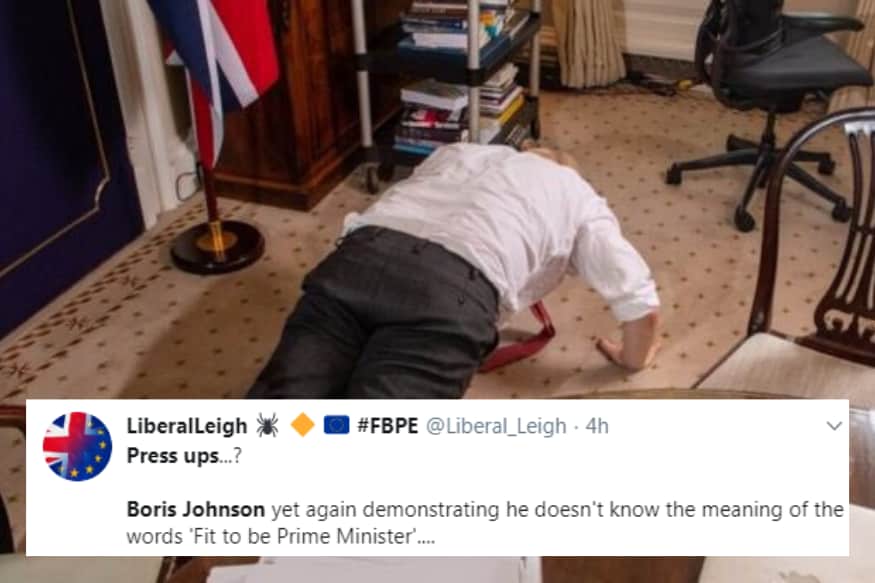 British Prime Minister Boris Johnson did some push-ups to show he was “as fit as a butcher’s dog” in an interview with the Mail on Sunday newspaper, just months after he fought for his life in hospital against the coronavirus.

Johnson, well known for staging eye-catching stunts during the campaign to leave the European Union and as London’s mayor, used the interview to unveil plans to spend on infrastructure to help Britain “bounce back” after the coronavirus lockdown.

But the British leader was also keen to show he was returned to health after being in intensive care in April after testing positive for the coronavirus, a stay he described shortly afterward as one which “could have gone either way”.

“I’m as fit as a butcher’s dog now,” Johnson said, and after asking: “Do you want me to do some press-ups to show you how fit I am?”, the prime minister, dressed in a shirt and tie, then got on the floor to complete some press-ups.

“The country is going to bounce forward, and I certainly feel full of beans. Never felt better.”

A photo of the PM doing push-ups, which was published by the Daily Mail newspaper has gone viral on social media. Critics have slammed Johnson for the “stunt”, with many claiming that such antics would do nothing to beat the COVID-19 pandemic in the UK.

Why would anyone with a brain give a toss whether Boris Johnson can do press-ups? I’d rather he knew how to run the country, and there’s massive evidence that he doesn’t.

I don’t know why you are all confused by that picture of Boris Johnson doing press-ups on the front page of the MoS, have you never been talking to a particular sort of posh, intoxicated Tory in a bar and somehow ended up with them doing press ups in front of you for some reason

While a contagious virus continues to run rampant through the country, UK Prime Minister Boris Johnson does press-ups for a photo op. Yet more evidence that BoJo is a clown. For all his faults, you would never see Sir Keir Starmer descending to this. pic.twitter.com/TLC5bykiBw

The sycophantic lows the Tory press will go to for Boris Johnson:
“Boris does press-ups for Mail on Sunday!”
Could be that he has fallen over & they are trying to cover it up in a double bluff! pic.twitter.com/gI49oo4vRi

Boris Johnson yet again demonstrating he doesn’t know the meaning of the words ‘Fit to be Prime Minister’….

Boris Johnson ‘proving his worth’ by doing press ups in front of Mail on Sunday journalists, and it making the fawning front page, is exactly where we said we’d end up if everyone didn’t stop smugly linking disability to being a terrible leader/person.

Hello @BorisJohnson. You are supposed to be the Prime Minister not some ageing immature clown. Magicking money from thin air, making promises you will never keep and showing your sheer stupidity by doing press ups.
Your position demands dignity. You have none

Coronavirus is Now a Deity in Many Indian Villages, Being Worshipped with Flowers and Sweets

The COVID-19 line laws in Canada are faultless: Travel did not spark the third surge, according to pundits, and Premier Doug Ford is redirecting once more