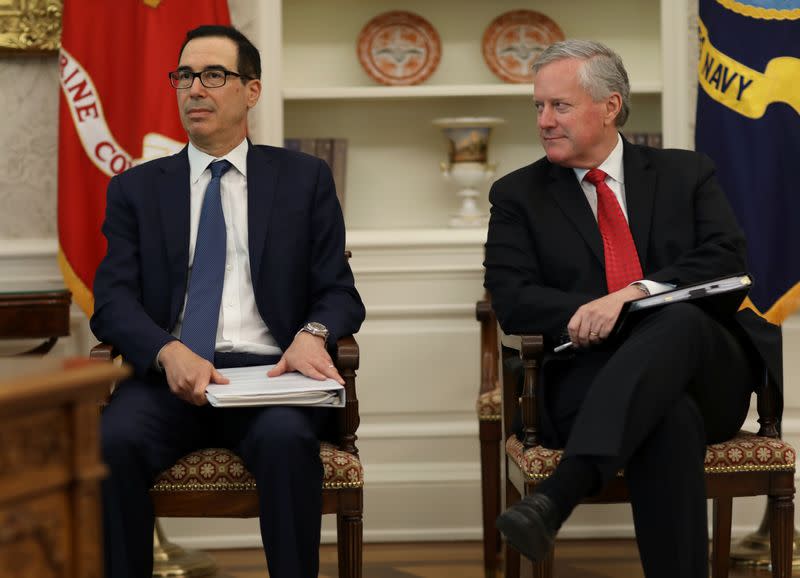 By Susan Cornwell and David Lawder

WASHINGTON (Reuters) – U.S. Senate Republicans on Monday are expected to unveil a $1 trillion coronavirus aid package hammered out with the White House, a starting point for negotiations with Democrats as unemployment benefits that have kept millions Americans afloat are set to expire.

Meadows and U.S. Treasury Secretary Steven Mnuchin said their agreement in principle with Senate Republicans would include an extension of supplemental unemployment benefits that aims to replace 70% of laid off workers’ lost wages.

On Friday, an extra $600 per week in supplemental unemployment benefits is due to expire, severing a financial lifeline for laid-off workers and a key support for consumer spending.

But the extra funds – in some cases exceeding a workers’ former wages – was a sticking point for many Republicans, helping to delay agreement during a week of wrangling over the party’s negotiating position.

Some Republicans had complained about the high price tag; the federal government has already spent $3.7 trillion to cushion the economic blow from pandemic-forced shutdowns.

Mnuchin and Meadows earlier on Sunday floated the idea of a piecemeal approach to coronavirus aid, first addressing unemployment and demands by businesses and schools to be shielded from coronavirus-related lawsuits, while tackling other issues later.

“We are going to be prepared, on Monday, to provide unemployment insurance extension that would be 70% of wages,” Meadows said on ABC’s “This Week” program on Sunday.

Democrats decried the Republican delay as U.S. coronavirus cases passed the 4 million mark, a milestone for a pandemic that has killed more than 146,000 people in the United States and thrown tens of millions out of work.

House Speaker Nancy Pelosi said on CBS’ “Face the Nation” on Sunday that if necessary, the House would stay in session until a deal is passed and added that Democrats would not accept a measure urged by Republicans to include liability protections for employers.

“What we will not support is what they’re saying to essential workers: ‘You have to go to work because you’re essential, we place no responsibility on your employer to make that workplace safe and if you get sick you have no recourse because we’ve given your employer protection,'” she said.

Pelosi has said that House Democrats would pursue the $3 trillion coronavirus aid bill that they passed in May, which would extend the extra $600 a week in unemployment benefits through the end of 2020.

The Republican plan will include another round of direct payments of $1,200 for individuals, White House economic adviser Larry Kudlow told CNN. He said it also would extend a federal moratorium on housing evictions contained in previous relief legislation.

Senate aides said the Republican plan also have more help for small businesses, $105 billion for schools, $16 billion for coronavirus testing, and legal protections for business that are reopening.

‘It’s what it’s,’ Trump says of rising coronavirus deaths as he insists outbreak is ‘below management’