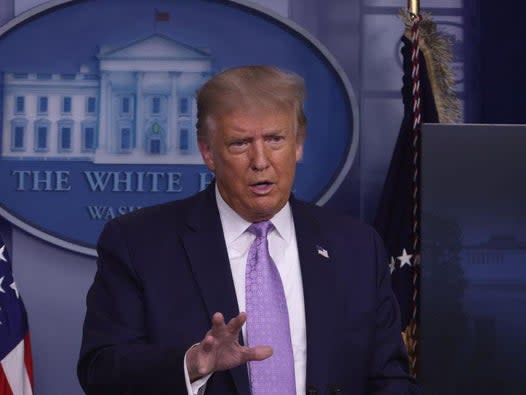 Donald Trump was “stating a fact” when he said that children are less susceptible to Covid-19, a White House official has said after Facebook removed a post in which the president made false claims about the virus.

Courtney Parella, deputy national press secretary, accused Facebook and Twitter of “flagrant bias” after the tech giants penalised Trump and his campaign team for promoting a video in which the president claimed children are “almost immune” from the disease.

“The president was stating a fact that children are less susceptible to the coronavirus,” Ms Parella said in a statement. “Another day, another display of Silicon Valley’s flagrant bias against this president, where the rules are only enforced in one direction. Social media companies are not the arbiters of truth.”

The row relates to comments Trump made in a call in with Fox News on Wednesday. “If you look at children, children are almost — and I would almost say definitely — but almost immune from this disease,” he told the network.

A recording of the interview was uploaded to Trump’s Facebook page. But officials at the firm later removed the post, saying it had violated the social media platform’s “policies around harmful COVID misinformation”. It is the first time Facebook has made such a move.

YouTube also said it had pulled down a video containing the presidents false claims.

In his interview with Fox News, Trump had been discussing the reopening of schools in America, a topic that is being fiercely debated.

The comments came as many schools throughout the US announce reopening plans and prepare for students to return, with some already returning to classrooms beginning this month.

The president on Wednesday also reiterated his claim that virus is “going away”, despite a surge of new infections in a number of states, particularly in the south and west.

“It’ll go away, like things go away,” he told reporters at his daily news briefing. “No question in my mind, sooner rather than later”.

“I don’t think we’re going to eradicate this from the planet because it’s such a highly transmissible virus that that seems unlikely,” he told Reuters.

“But what I think we can do with the combination of a good vaccine and attention to public health measures – by attention I don’t mean shut down, I mean things that are just prudent – then I think we can get behind this.”

“We may need to go through a season of it and then by next season, if we have a vaccine, it won’t be a pandemic, it won’t be immobilising the world, it won’t be destroying the economy,” he added.

As of Thursday morning, the US had reported 4.8 million infections and recorded 159,000 deaths – the highest number of cases and fatalities in the world.

Is Coronavirus Making Us Extra Dishonest?