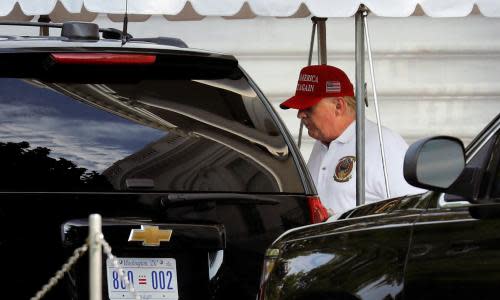 Joe Biden leads Donald Trump by 15% among registered voters nationally and holds a 20-point lead when it comes to who Americans trust to handle the coronavirus pandemic, according to a major poll out on Sunday.

In the same ABC News/Washington Post poll, Biden led Trump by 10 points in May and two points in March. Now, among respondents who said they will certainly vote in November, Biden leads by 11%.

Fox News also released a poll on Sunday. It put Biden ahead on coronavirus, race relations and the economy and eight points up nationally.

In an interview with Fox News Sunday recorded at the White House on Friday, Trump said “I’m not losing, because those are fake polls” and refused to say if he would accept the result if Biden beat him in November.

On Saturday, the New York Times and Washington Post reported that the White House is seeking to block stimulus package funding for coronavirus testing and tracing, the Centers for Disease Control and Prevention, the National Institutes of Health, and state and Pentagon programmes to tackle Covid-19 abroad.

Biden campaign director of rapid response Andrew Bates said: “Trump is turning his back on his most important responsibility to the American people [because] in the words of his own advisers, he ‘doesn’t want to be distracted by’ the worst public health crisis in 100 years. This is absolutely unconscionable.”

Trump told Fox News Sunday he took “responsibility always for everything” regarding the pandemic.

But he also said he might veto the next stimulus package designed to help unemployed Americans and small business if it did not include a payroll tax cut. As that would dramatically affect social security and other vital programmes, it is seen by most in Congress as a political non-starter.

According to the ABC/Post poll, Biden has also caught up to Trump on trust to run the economy and leads by nine points on trust to handle crime and safety.

That will be a worrying number for Trump as he seeks to make law and order a central plank of his re-election campaign, and to portray Biden as a puppet of protesters demanding radical policing reform.

On Fox News Sunday, Trump claimed Biden supported calls to defund police. Host Chris Wallace pointed out that was not true, leading to an angry exchange.

Wallace also asked why the US did not have “a national plan” for tackling the pandemic and if Trump took responsibility for that.

“Look,” the president said, “I take responsibility always for everything because it’s ultimately my job, too. I have to get everybody in line.”

I take responsibility always for everything because it’s ultimately my job, too. I have to get everybody in line

That contrasted with an infamous remark made at a press conference in March, when Trump said “I don’t take responsibility at all” for problems with federal testing.

In his interview, Trump also repeated a familiar claim, saying the amount of testing the US was doing “skews the numbers”, and was challenged about his remark earlier this month that the coronavirus would “at some point … sort of just disappear”

The president said he had a good relationship with Dr Anthony Fauci, the White House coronavirus taskforce member who has reportedly been blocked from television and who has said he has not briefed the president in months.

“I spoke to him yesterday at length,” Trump said, “I have a very good relationship with Dr Fauci.”

He also said Fauci, who has served six presidents since 1984 and has emerged as a trusted and frank public voice, was “a little bit of an alarmist”.

Biden was due to run coronavirus-themed campaign ads during the interview in six battleground states. Polling averages put him in the lead in all six. In the ABC/Post poll, Trump’s overall job approval was down nine points to 39%.

Trump, 74, declined a chance to say his 77-year-old challenger was “senile” but said: “I’d say he’s not competent to be president.” The Fox News poll found that more people think Biden is mentally sound compared to Trump.

The president also blasted his niece, Mary Trump, whose tell-all book sold nearly 1m copies on publication day. The clinical psychologist has been highly critical of her uncle in TV interviews, having defeated an attempt to silence her through the courts.

Trump repeatedly complained that his niece depicts his father, Fred Trump, as a “psychopath”. In fact she says the property developer, who died in 1999, was a “high-functioning sociopath” who shaped his son’s personality.

“Donald’s pathologies are so complex and his behaviors so often inexplicable,” Mary Trump writes in Too Much and Never Enough: How My Family Created the World’s Most Dangerous Man, “that coming up with an accurate and comprehensive diagnosis would require a full battery of psychological and neuropsychological tests that he’ll never sit for.”

On Sunday, as the media frantically parsed Trump’s latest battery of misleading or inflammatory claims, it seemed the decision to sit for an interview with Wallace may not have been a wise one.

Trump played golf in Virginia, but he found time to tweet about his decision to send federal agents to Portland, Oregon, the site of extensive protests over racism and police brutality.

Regarding Trump’s bad polling, Jason Miller, a campaign adviser, tweeted: “Media pollsters got it wrong in 2016 and they’ve gotten even worse in 2020. Now they’ve become suppression polls, with the specific – and intentional – goal of trying to demotivate Donald Trump’s base of support.”