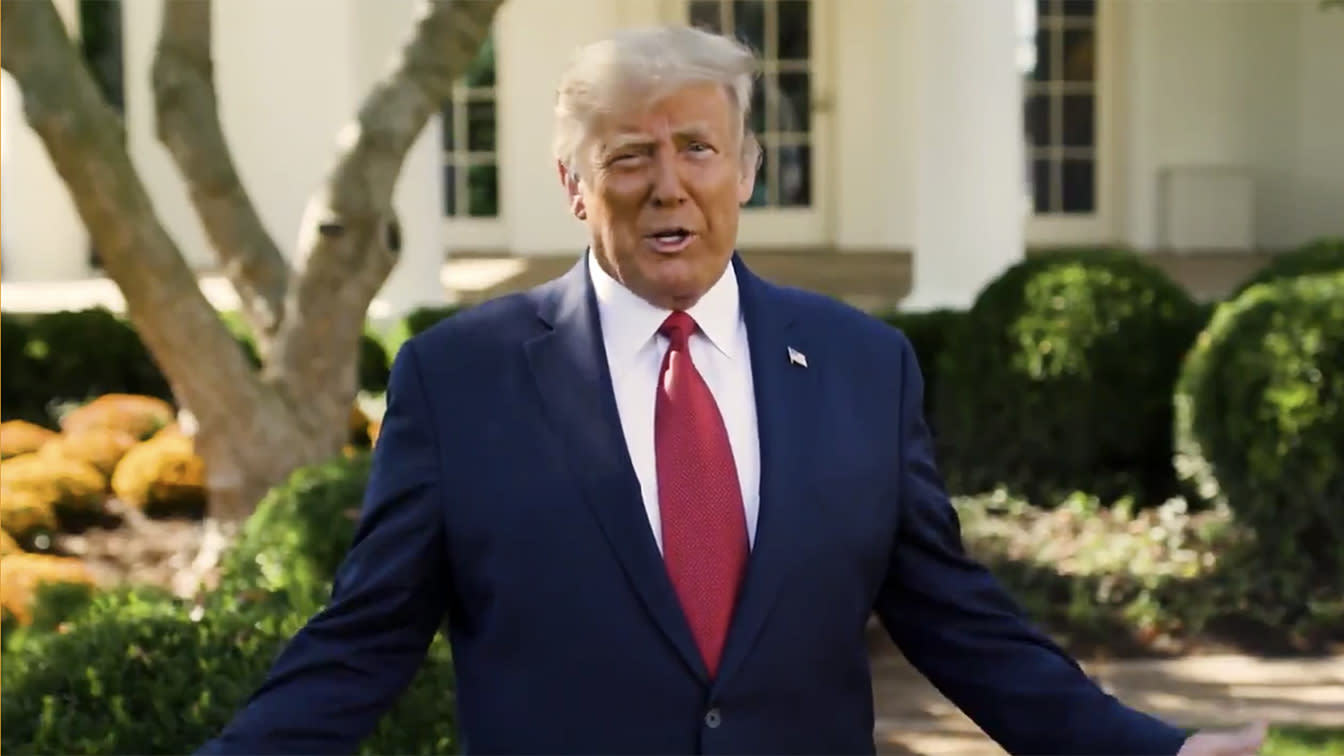 President Trump released a new video from the White House on Wednesday in which he said that his contraction of COVID-19 was a “blessing from God,” and he credited an experimental antibody treatment for his apparent recovery from the disease that has so far killed more then 211,000 Americans.

“I think this was a blessing from God that I caught it,” Trump said in a video filmed just outside the Oval Office on Wednesday, according to his chief of staff, Mark Meadows, even though the president stated that he had returned form the hospital “a day ago” rather than on Monday night.

While hospitalized at Walter Reed Medical Center, Trump began a course of an experimental antibody cocktail manufactured by Regeneron last Saturday. The president had been admitted to the hospital after experiencing multiple drops in his blood oxygen level on Friday, the day after he said he first tested positive for COVID-19. Not approved by the FDA for use for COVID-19 patients, the drug costs over $100,000 per year for patients who take it to fight cancer and blood disorders.

Without specifying how he would go about it, Trump said he hoped to get the medication, as well as another made by pharmaceutical manufacturer Eli Lilly, approved by the FDA and provided free of charge to all hospitalized COVID-19 patients in America.

Echoing statements he has made since returning to the White House from Walter Reed, Trump assured the nation that the more than 7 million Americans infected with the virus could easily beat it.

Trump likely remains infectious for COVID-19. The CDC states on its website that patients with mild to moderate cases of the disease remain contagious for at least 10 days, while those with more severe cases can still transmit it for up to 20 days.

Trump admitted that his goal of having a vaccine for COVID-19 in distribution by the Nov. 3 election was not achievable. He blamed “politics” for getting in the way.

“We’re going to have a great vaccine very, very shortly,” Trump said. “I think we should have it before the election but frankly the politics gets involved and that’s OK. They want to play their games. It’s going to be right after the election.”

The Food and Drug Administration informed drug manufacturers this week that they would need at least two months of follow-up data to show that their vaccines were safe for the general public. That timeline means that a vaccine will not be ready before Election Day.

Trump then took credit for the pace at which the vaccine has been developed, saying that his pressure on the FDA had made the difference.

Former Vice President Joe Biden was asked by reporters in Wilmington, Del., to respond to Trump’s assertion that catching COVID-19  was a “blessing in disguise.”  “I’m going to think before I speak. I think it’s a tragedy the president deals with COVID like it is something not to be worried about when already 210,000 people have died,” Biden responded.