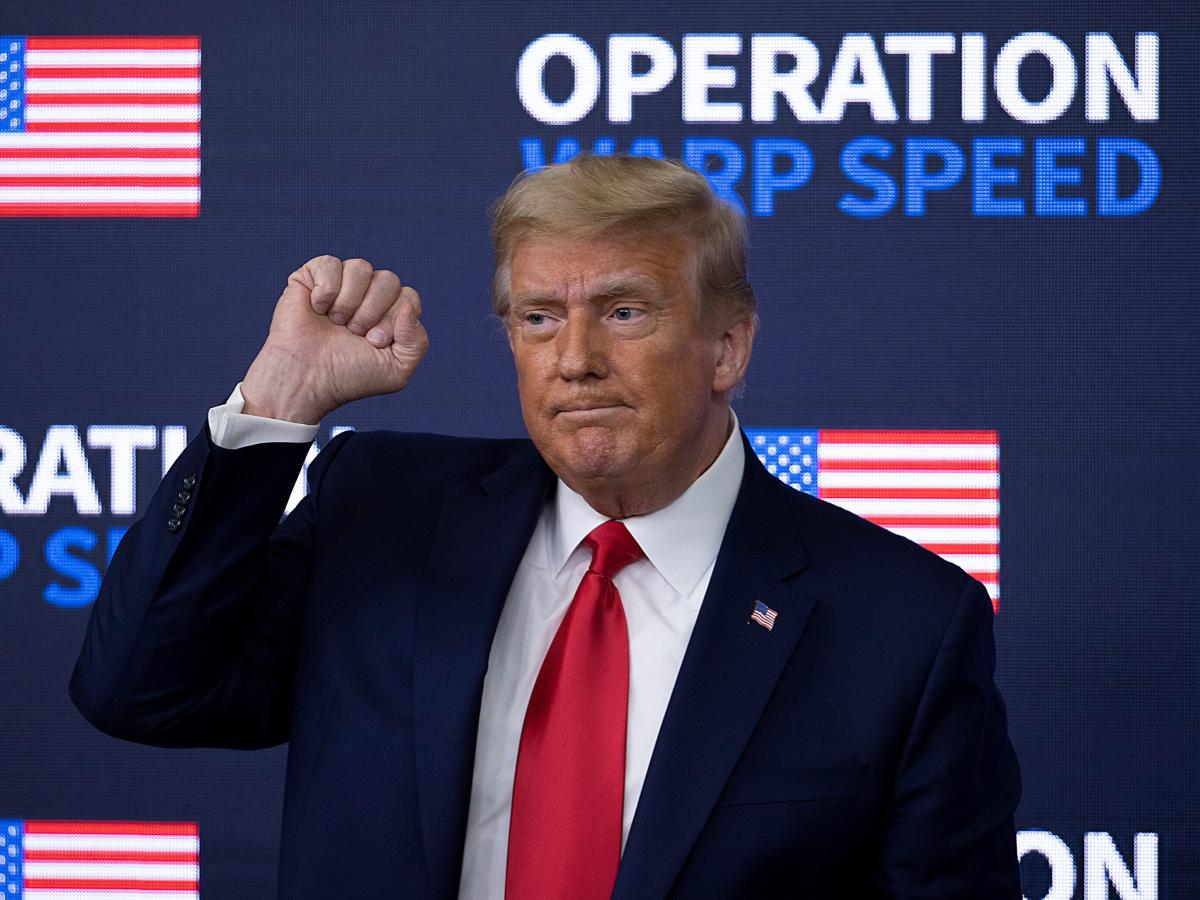 Trump greets the crowd before he leaves at the Operation Warp Speed Vaccine Summit on December 08, 2020 in Washington, DC.Tasos Katopodis/Getty Images

Former President Trump falsely said “everybody wanted the vaccine” when he was in office.

Trump supporters refusing to get vaccinated has driven partisan gaps in vaccination.

“And once I was out, all of a sudden people didn’t want it,” Trump said, blaming mandates for low uptake.

Former President Donald Trump said “everybody wanted” to get a COVID-19 vaccine when he was president and blamed vaccine mandates for low vaccine uptake among some segments of the population — even though millions of his supporters have refused to get vaccinated.

Trump, who falsely claimed vaccines cause autism in children as a presidential candidate, touted the development of COVID-19 vaccines while he was president.

“I think what we do get great credit for that they tried but it didn’t work — even their side said you can’t do that — is Operation Warp Speed,” Trump said in an interview with the Clay Travis and Buck Sexton Show. “And not only the fact that the vaccines were developed in nine months as opposed to five years to 12 years.”

While Trump now claims vaccine hesitancy wasn’t an issue while he was president, many of his most prominent supporters and advisers pushed COVID vaccine misinformation while he was president. The former president has continued to face pushback for his staunch pro-vaccine stance from influential conservatives and his rank-and-file supporters.

“Everybody wanted the vaccine when I was there, and we were doing a million shots a day, and, you know, we mobilized,” Trump said.

But Trump didn’t publicly disclose when he and former first lady Melania Trump were vaccinated at the White House before leaving office in January 2021 and didn’t begin publicly promoting the vaccines until months later.

In that time, as vaccines became widely available to the American public, sharp partisan gaps in vaccine uptake between Democrats and Republicans emerged.

A Kaiser Family Foundation study conducted in November 2021, for example, found that Republicans and Republican-leaning independents made up 41% of the adult population but 60% of unvaccinated adults in the United States and that, when controlling for other factors, a Republican was 26 percentage points less likely to be vaccinated than a Democrat.

“And the military really did well, much better than their leaders led them, I will tell you, in the removal from Afghanistan. That I can tell you. And they were doing really well. They were delivering ’em,” Trump said. “And everybody wanted the vaccine. And once I was out, all of a sudden people didn’t want it. And that’s how you started with this whole mandate thing, which is terrible, okay, ’cause you’re forcing people.”

In recent months, Trump has stepped up his advocacy for COVID-19 vaccinations and boosters in recent months after dismissing booster shots in August 2021 as a “money-making operation” for pharmaceutical companies and saying he likely wouldn’t receive a third COVID shot in September (though he eventually did get one).

Trump was booed by some of his fans when he announced he’d received a booster shot at an event with former Fox News host Bill O’Reilly in December 2021.

Trump has also called out “gutless” unnamed politicians for refusing to reveal their booster status, which some interpreted to be a thinly-veiled jab at Florida Gov. Ron DeSantis after DeSantis declined to say whether or not he had been boosted in a December 2021 interview.

“Many politicians — I watched a couple of politicians be interviewed, and one of the questions was, ‘Did you get the booster?’ because they had the vaccine. And they’re all answering it like — in other words, the answer is yes, but they don’t want to say it because they’re gutless,” Trump told One America News’ Dan Ball.

“You gotta say it. Whether you had it or not, say it,” Trump added.

DeSantis, a possible 2024 presidential candidate who has taken a hardline stance against vaccine mandates and passports in Florida, has denied rumors of tension with Trump.

A professional-Trump evangelical suggested getting the COVID-19 vaccine. His followers revolted.

Are the Royals Not Following New Lockdown Guidelines With New Coronavirus Pressure Scare?

WHO warns COVID-19 pandemic is ‘not essentially the massive one’