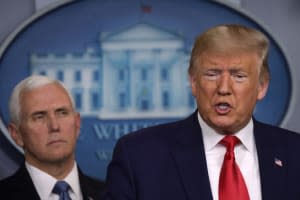 Former President Donald Trump’s initial response to the nascent COVID-19 pandemic was to mask the number of cases and, relatedly, keep infected people off U.S. soil, according to a new book, Nightmare Scenario: Inside the Trump Administration’s Response to the Pandemic That Changed History, by Washington Post reporters Yasmeen Abutaleb and Damian Paletta.

Trump berated public health officials — and, unintentionally, his son-in-law and shadow coronavirus task force head, Jared Kushner — for trying to roll out a national testing strategy, the Post reports, citing an advance copy of the book, and he had some pretty radical ideas for how to handle Americans infected with the virus overseas. “Don’t we have an island that we own?” Trump asked advisers in the Situation Room in February 2020, Abutaleb and Paletta report. “What about Guantanamo?” He reportedly added, “We are not going to import a virus.”

After Trump proposed using Guantanamo a second time, stunned aides quickly shot down the idea, worried the American public would react poorly to quarantining U.S. tourists at the same military prison camp that holds terrorism suspects, the Post reports. Abutaleb and Paletta base their book on interviews with more than 180 people, including White House senior staff and government health leaders. But Trump said publicly in March 2020 he wanted to keep U.S. citizens on the infected cruise ship Grand Princess, not bring them to shore, so his COVID-19 numbers wouldn’t go up.

Trump told his aides to fire the senior State Department official who allowed 14 coronavirus-infected Americans to return home from the Grand Princess’ sister ship, the Diamond Princess, docked in Japan, Abutaleb and Paletta report. Letting them fly back to the U.S. — and probably saving their lives, the Post reports — “doubles my numbers overnight,” Trump reportedly complained to Health and Human Services Secretary Alex Azar. Trump also called for firing HHS emergency preparedness chief Robert Kadlec, who signed off on the Diamond Princess evacuation, the book reports, adding that senior officials resisted Trump’s demands and he eventually “gave up.”

“One of the biggest flaws in the Trump administration’s response is that no one was in charge of the response,” Abutaleb and Paletta write in Nightmare Scenario, which means that “ultimately, there was no accountability, and the response was rudderless.” Read more at The Washington Post.

‘No one will be spared’: Georgia election workers have reportedly received a ‘torrent’ of threats from Trump supporters