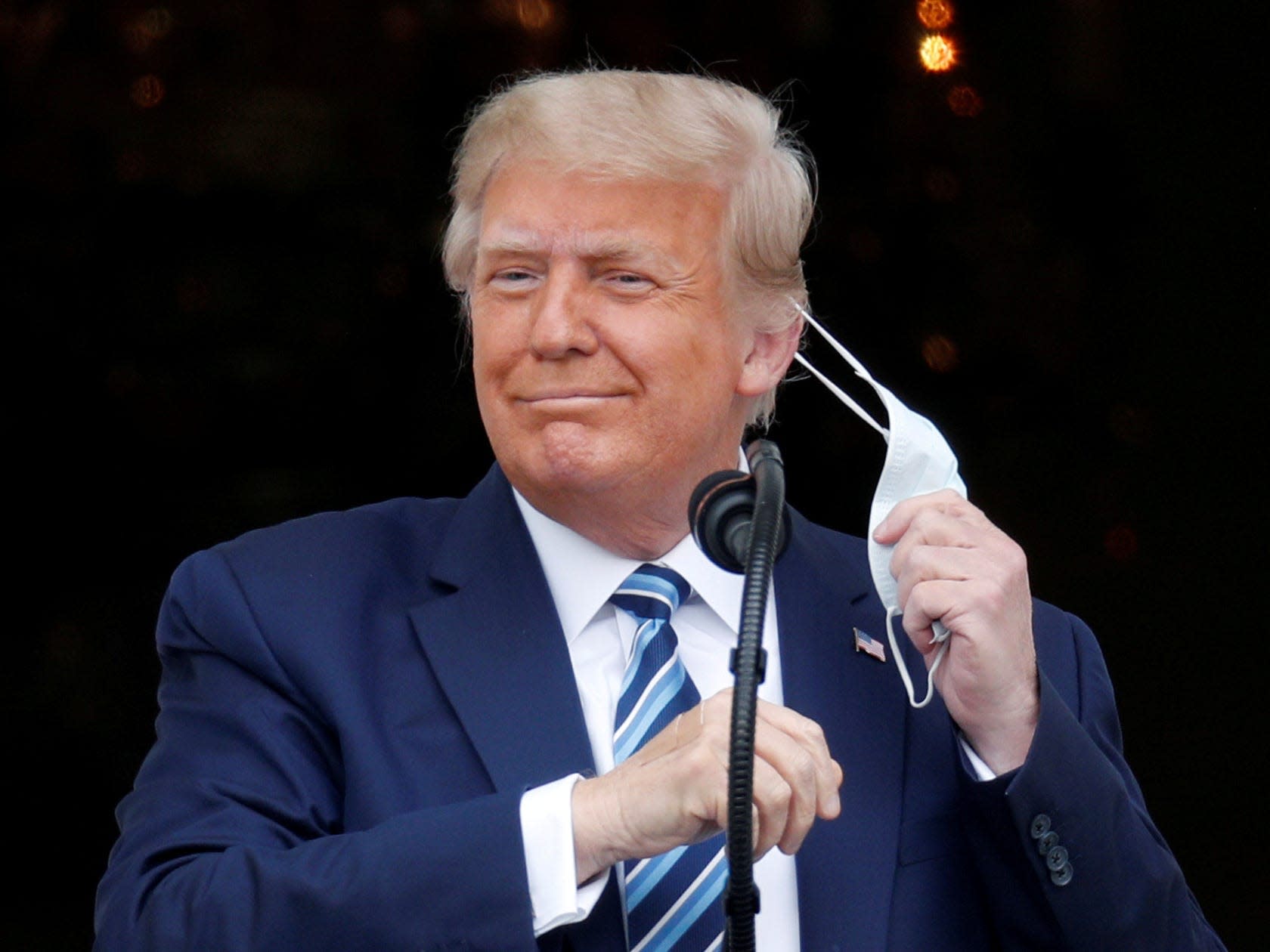 President Donald Trump takes off his face mask as he comes out on a White House balcony to speak to supporters gathered on the South Lawn in Washington, October 10, 2020. Tom Brenner/Reuters

Trump officials privately touted their efforts to alter scientific reports about the coronavirus.

The Washington Post reported on the investigation on Friday.

Health officials in former President Donald Trump’s administration gloated about their efforts to edit scientific reports on COVID-19 last year to fit Trump’s messaging, according to documents obtained by The Washington Post on Friday.

An investigation by a congressional subcommittee on COVID-19 found that a team of Trump appointees at the Department of Health and Human Services “engaged in a persistent pattern of political interference in the nation’s public health response to the coronavirus pandemic,” Democratic Rep. Jim Clyburn of South Carolina, the subcommittee chair, wrote to two former officials, coronavirus advisor Scott Atlas and science advisor Paul Alexander.

According to The Post, emails reviewed by the panel show that Trump officials had been “overruling and bullying scientists and making harmful decisions that allowed the virus to spread more rapidly,” Clyburn wrote.

In one email sent on September 9, Alexander wrote to Michael Caputo, the then-assistant secretary for public affairs at HHS, touting a “small victory but a victory nonetheless and yippee!!!” about an alleged change to the first line of a CDC report on virus transmission among young people.

In another email sent on September 11, Alexander asked Atlas to help him “craft an op-ed” that would challenge an upcoming CDC report about COVID-19 deaths among young patients.

“Let us advise the President and get permission to preempt this please for it will run for the weekend so we need to blunt the edge as it is misleading,” Alexander wrote to Atlas, The Post said.

As the coronavirus spread across the country last spring, Trump and his allies frequently sought to downplay the severity of the outbreak. When states pursued lockdown restrictions to combat the spread of the virus, Trump urged governors to reopen the economy, going against the recommendations of his own COVID-19 advisors. The former president and those close to him would also often neglect following public health guidelines advised by the CDC.

“I know the President wants us to enumerate the economic cost of not reopening,” Caputo wrote in an email to Alexander on May 16. “We need solid estimates to be able to say something like: 50,000 more cancer deaths! 40,000 more heart attacks! 25,000 more suicides!”

“You need to take ownership of these numbers,” Caputo wrote in a subsequent email to Alexander, per The Post. “This is singularly important to what you and I want to achieve.”

House Democrats launched an investigation into Trump appointees potentially pressuring career officials to alter the language of scientific reports after Politico first reported on the issue on September 11, 2020. The subcommittee has requested interviews with Alexander and Atlas as well as additional documents to complete its probe, according to The Post.

1 in 5 new COVID-19 infections in LA are in fully-vaccinated individuals. Most of them have delicate signs, or none in any respect.