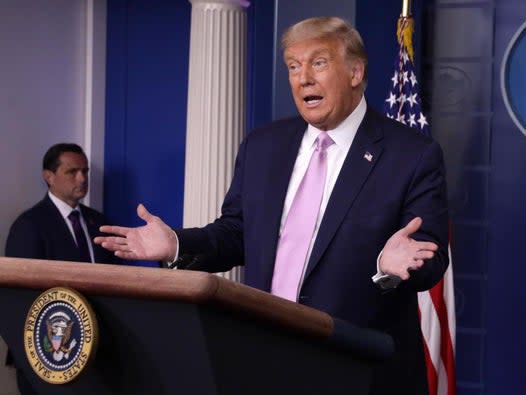 Donald Trump again mourned the deaths of “all the birds” that are allegedly killed by wind turbines each year, but failed to mention the 160,000 people who’ve died from Covid-19.

In a rambling interview, Mr Trump claimed Ms Harris was against “petroleum” and she and her running mate would be unable to win Pennsylvania and “many other states”. Then he got sidetracked and went on about wind power.

“Site and home values going way down,” he continued. “If you see a windmill and hear a windmill, your home is worth half or less than half. It kills all the birds.”

This claim is not new for the president.

He’s targeted wind turbines, or “windmills” as he calls them, previously in an effort to stall the renewable energy movement – with claims that birds are being killed by the turbines, so voters should vote against the energy source.

“They’re noisy. They kill the birds,” Trump said in December while in Florida. “You want to see a bird graveyard? You just go. Take a look … Go under a windmill someday. You’ll see more birds than you’ve ever seen, ever, in your life.”

Mr Trump was not the only politician concerned with the fate of birds at the hands of wind turbines. Russia’s Vladimir Putin has echoed similar concerns.

“Everybody knows that wind power is good, but is anyone thinking about the birds? How many birds die?” Mr Putin said when attending the Global Manufacturing and Industrialisation Summit. “I am not saying it should not be developed, of course it should, but let’s not forget the related problems.”

When Mr Trump appeared on the Fox News show on Tuesday night, he took up more than 30 minutes of Mr Hannity’s hour-long show. But it was only in the last few minutes that the Fox News’ pundit asked the president about the coronavirus pandemic, which has taken the lives of nearly 165,000 Americans thus far.

Mr Hannity noted that the death rate has risen in the US, but he added it would soon ”drop precipitously”. He then changed the topic to speak about vaccines and therapeutics.

The president did not mention the death toll or express remorse to the lives that have been lost after contracting the novel virus.