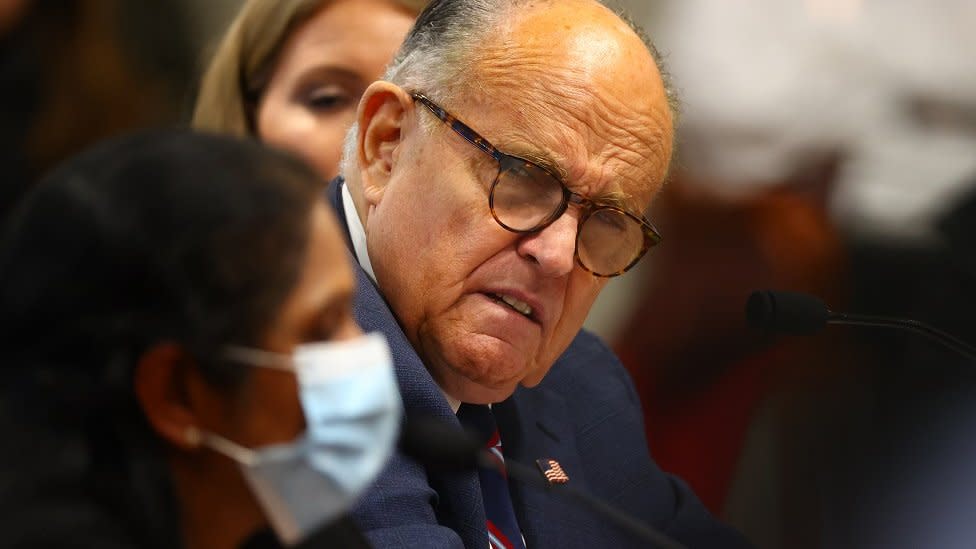 President Donald Trump’s personal lawyer, Rudy Giuliani, has tested positive for Covid-19 and is being treated in hospital.

The president wrote in a tweet: “Get better soon Rudy, we will carry on!”

Mr Giuliani, who has led the Trump campaign’s legal challenges to the election results, is the latest person close to the president to be infected.

The president and his team have been criticised for shunning safety guidance. Mr Trump was ill in October.

Mr Giuliani, 76, was admitted to the Medstar Georgetown University Hospital in Washington DC on Sunday, according to US media reports.

In a tweet, the former New York mayor thanked well-wishers for their messages, and said he was “recovering quickly”.

Thank you to all my friends and followers for all the prayers and kind wishes.

Recovering quickly and keeping up with everything.

His son, Andrew Giuliani, who works at the White House and tested positive for the virus last month, tweeted that his father was “resting, getting great care and feeling well”.

It is not clear if Mr Giuliani is experiencing symptoms or when he caught the virus.

Nearly 14.6 million people have been infected with Covid-19 in the US, according to Johns Hopkins University, and 281,234 people have died – the highest figures of any country in the world.

“This is the worst event that this country will face,” she said.

Since the 3 November election, the lawyer has travelled the country as part of unsuccessful efforts to overturn Mr Trump’s election defeat. During many of his events, he was seen without a face mask and ignoring social distancing.

Last Thursday he travelled to Georgia where he repeated unsubstantiated claims of voter fraud at a Senate committee hearing about election security.

Dozens of people in Mr Trump’s orbit are said to have tested positive for Covid-19 since October.

Boris Epshteyn, another Trump adviser, tested positive shortly after appearing alongside Rudy Giuliani at a news conference on 25 November.

Others include the president’s chief of staff Mark Meadows and press secretary Kayleigh McEnany, along with his wife Melania and sons Donald Jnr and Baron.

Mr Trump’s own diagnosis and hospital stay upended his campaign for a second term in office, less than a month before he faced Joe Biden in the presidential election.

Mr Trump has refused to concede, insisting without evidence that the election was stolen or rigged. Attorney General William Barr said last week that his department had not seen any evidence of widespread voter fraud that would change the result.

Mr Biden will be sworn in as president on 20 January.

Don't Miss it Covid-19 Pandemic Has Led to a 50% Decline in Hepatitis C Testing, Reveals Examine
Up Next A Michigan pastor is underneath fireplace after claiming ‘none have died’ from the coronavirus