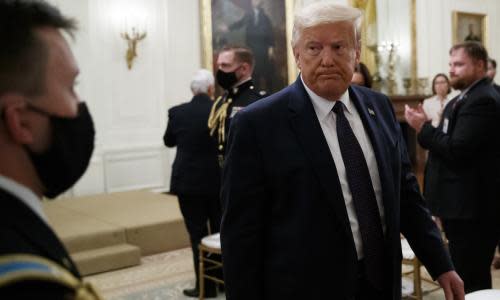 Donald Trump has “essentially gone awol from the job of leadership that he should be providing a country in trouble” during the coronavirus pandemic, a former defence secretary and CIA director said on Wednesday.

Leon Panetta, who served in various capacities under nine US presidents, became the latest prominent public figure to accuse Trump of effectively surrendering to the virus and abandoning Americans to their fate, using the military jargon awol, meaning absent without leave.

“This is a major crisis,” Panetta told Anderson Cooper 360 on CNN, noting that top infectious diseases expert Anthony Fauci has warned that America may hit 100,000 new cases a day, twice the current rate.

“But the president, rather than bringing together some kind of national strategy to confront this crisis, simply resorts to tweeting about vandalism and other things to kind of divert attention from the crisis that’s there.”

He added: “We have a president that is not willing to stand up and do what is necessary in order to lead this country during time of major crisis. I have never experienced a president who has avoided that responsibility.”

The virus has infected more than 2.6m Americans and killed 128,000, according to Johns Hopkins University. Newly reported infections topped 50,000 on Wednesday for the first time, an all-time high in the US outbreak, and are rising significantly in 40 states, more than a dozen of which have been forced to pause reopening plans. Hospital beds and testing capacity are under strain.

Trump is accused of a double failure of leadership, first downplaying the virus in January and February and then, after a frenetic April in which he billed himself as a “wartime president”, recklessly pushing states to reopen, holding a campaign rally and reverting to a head-in-the-sand approach. Now, as then, he has claimed the virus will “just disappear”, adding “I hope” in an interview, even as Covid-19 ravages the nation.

When Trump held a town hall on Fox News with Sean Hannity last week, only three minutes of the hour were dedicated to the coronavirus, according to an analysis by CNN. When the White House coronavirus task force held its first briefing in nearly two months, it took place at the health department rather than the White House and was fronted by the vice-president, Mike Pence, whereas the president had frequently taken the helm before.

I have never experienced a president who has avoided that responsibility

Trump’s Twitter feed is dominated by attention-deflecting attacks on election rival Joe Biden, fulminations over statues being toppled, bellicose calls for law and order and bald pronouncements such as “THE LONE WARRIOR!” – but the virus is seldom mentioned.

Asked by the Guardian whether the president had made a conscious decision to talk less about the virus, Kayleigh McEnany, the White House press secretary, said on Wednesday: “The president is not focused on talking; he’s focused on action. And this administration has taken historic action with regard to the coronavirus.

“We have an excess amount of PPE, surge – a huge amount of ventilators in the stockpile. Things that could never be done, we were told, have been done under this administration. Testing more than 600,000 a day. This president has done a historic job with regard to coronavirus.”

Democrats argue that Trump is ignoring the disaster while passing the buck to state governors. Speaking in Wilmington, Delaware, on Tuesday, Biden said: “It seems like our wartime president has surrendered and waved the white flag, and left the battlefield.”

Moe Vela, a Democratic strategist and former senior adviser to Biden at the White House, said: “I think he really believes that if he doesn’t talk about it, and that if he distracts us from it, somehow we’re going to forget that he was responsible for it.

“He thinks that if he talks about something else or focuses on some other topic or engages in some other ridiculous behaviour pattern then we’re going to forget that people are dying. How do you forget that people are dying? This is not a resurgence; this is a continuation of a very deadly virus that is spreading like wildfire and he’s running in the opposite direction.”

Vela, chief transparency officer of TransparentBusiness, added: “It could easily rank in the top one or two examples of the epitome of failed leadership in the history of our nation. You contrast this to an Abraham Lincoln and you can dramatically see the extreme ends of the spectrum of leadership.”

Neera Tanden, president of the Center for American Progress, a liberal thinktank in Washington, is currently recovering from Covid-19. Asked for her view of Trump’s response to the pandemic, she replied: “I don’t think it’s fit to print. President Trump’s response to the virus has been, I think, the worst of any large scale democracy in the world. It’s unprecedented. There’s no national plan.”

Tanden, a prominent supporter of Hillary Clinton in the 2016 election, added: “He’s caught because his performance has been so terrible on the virus that he thinks he can just change the subject by not talking about it. The problem is that it’s the chief concern of voters, much more than the economy.”

A poll by Hart Research for the pressure group Protect Our Care found that even voters who approve of Trump’s handling of the economy care more about his botched response to the virus. Some 57% believe that Trump’s policies are increasing the chances that many more people will die from the coronavirus, while only 17% believe they decrease it.

Overall, the survey found, 60% of voters disapprove of how Trump has handled the coronavirus and 57% believe the president is to blame for the deaths associated with it.

How Quickly After the Second Dose Of COVID-19 Vaccine Do You Develop Immunity?

Is COVID-19 be transmitted between people and animals?