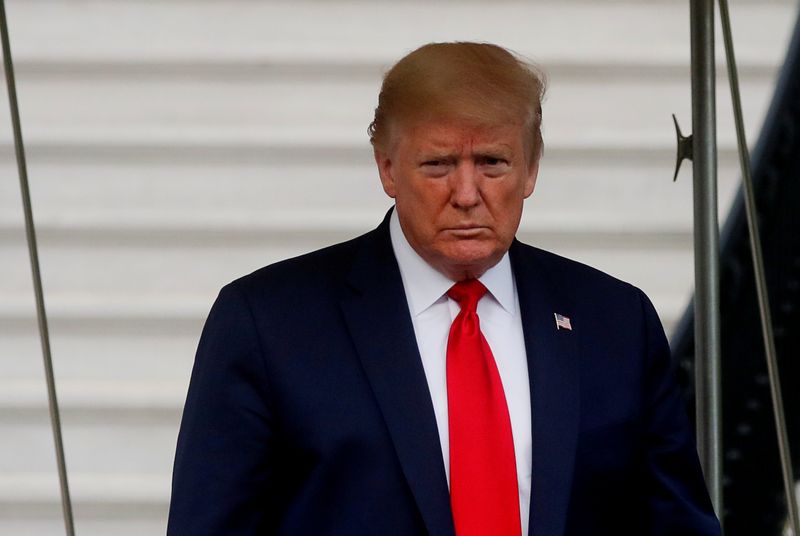 NEW YORK (Reuters) – More Americans have grown critical of President Donald Trump over the past month as the death toll mounts from the coronavirus pandemic and he now trails Democratic challenger Joe Biden by 8 percentage points among registered voters, according to a Reuters/Ipsos opinion poll released on Tuesday.

The poll conducted on Monday and Tuesday showed that 41% of U.S. adults approved of Trump’s performance in office, which is down 4 points from a similar poll that ran in mid-April. Fifty-six percent disapprove of Trump, up by 5 points in the same span.

It also found that 46% of registered voters said they would back Biden in the Nov. 3 presidential election, while 38% would vote for Trump. That compared with a 2-point Biden lead in Reuters/Ipsos polling last week.

Americans also appear to be increasingly critical of the way Trump has handled the health crisis. According to the poll, those who disapprove of Trump’s performance at the helm of the country’s pandemic response outnumber those who approve by 13 percentage points – the highest level of net disapproval since the poll started asking the question at the beginning of March.

Trump initially downplayed the threat of the virus that has killed more than 80,000 people in the United States, the highest death toll of any country. He has sometimes contradicted disease specialists in his administration, promoted potential treatments that were not found effective and has accused Democratic governors of reopening their states slowly in order to hurt his re-election chances.

The Republican president has defended his administration’s handling of the crisis and has accused China of failing to alert the world to the severity and scope of the outbreak, which has hammered the economy.

Biden has routinely led Trump among polls of registered voters this year. But his lead had been steadily eroding until this week.

The public sees Trump as the stronger candidate for job creation, while Biden is seen as better suited on healthcare issues. The poll showed that the public was split over which candidate would be better for dealing with the coronavirus response.

The Reuters/Ipsos poll was conducted online, in English, throughout the United States. It gathered responses from 1,112 American adults, including 973 who identified as registered voters. It had a credibility interval, a measure of precision, of plus or minus 4 percentage points.