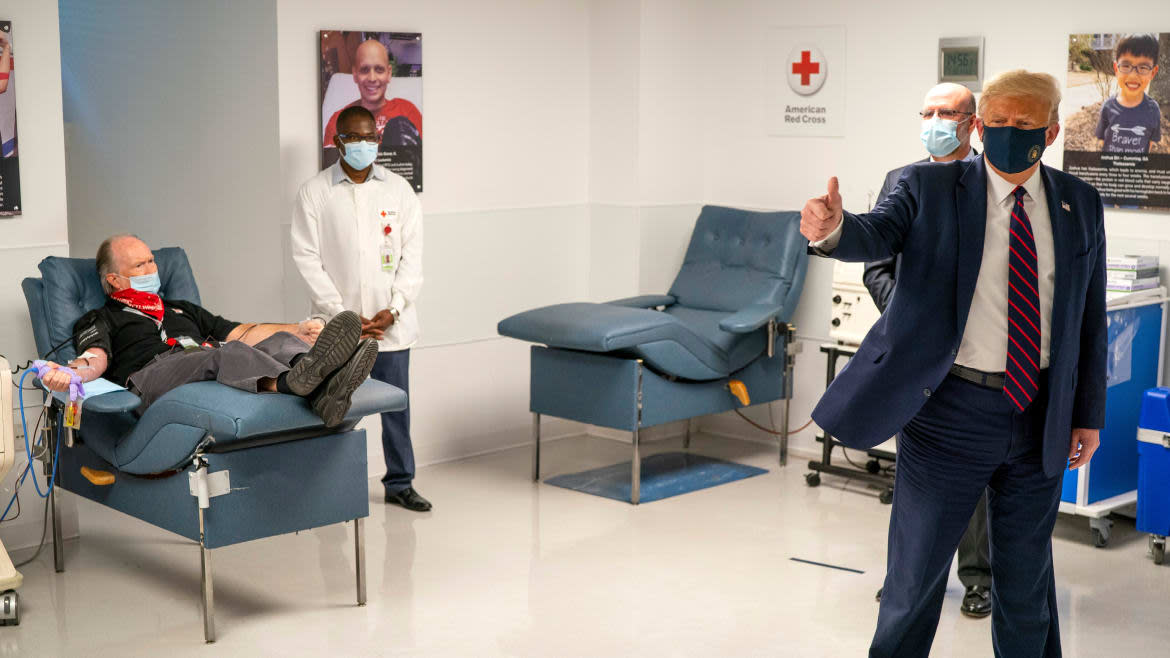 President Trump was expected to use a press conference on Sunday to announce emergency use authorization from the Food and Drug Administration for convalescent blood plasma to treat COVID-19, according to media reports.

The treatment, which hinges on injecting antibodies from COVID-19 survivors into other patients to boost their body’s defenses against the virus, has been used on at least 97,000 patients. So far, though, the plasma treatment has only produced middling data to support its efficacy.

The expected announcement would come just days after the FDA reportedly pulled back from issuing the same authorization over concerns from Dr. Anthony Fauci and other top government health officials about the effectiveness of the treatment.

To be sure, four former FDA chiefs have voiced support for the treatment, citing its effectiveness in treating prior epidemics including SARS, measles, Ebola, and the 1918 influenza outbreak. But they stated that it should be fully tested before widespread implementation in a clinical setting.

“Let’s get the trials done & if the results are life saving, let’s make it standard of care, thus benefitting hundreds of thousands to millions,” former FDA Commissioner Robert Califf wrote in a tweet. “If not we can avoid the huge expense & effort & keep looking for best treatments.”

A Mayo Clinic analysis of 35,000 plasma recipients found that COVID-19 patients who received the plasma earlier in their treatment had a better chance of surviving than those who received the plasma later. But that work, like other efforts to study the use of convalescent plasma treatment on COVID-19, hasn’t been peer-reviewed, and it didn’t include a control group–making it unclear how seriously doctors and health officials should take its results.

There were signs as early as March that plasma therapy might work. Between late January and late March, a team of doctors at Shenzhen Third People’s Hospital in China administered convalescent plasma from five recovered donors to five critically ill COVID-19 patients.

The results were encouraging. Body temperature quickly normalized in four of the five patients. Viral loads decreased. The hospital soon discharged three of the patients. The other two were stable at the time of publication in late March.

But the Shenzen doctors warned against drawing firm conclusions from an experiment involving only five people. “This was a small case series that included no controls,” they wrote. “It is unclear if these patients would have improved without transfusion of convalescent plasma.”

Convalescent plasma is “not all hype,” Paul Offit, Director of the Vaccine Education Center at the Children’s Hospital of Philadelphia, told The Daily Beast. But it’s also “certainly not a game-changer,” he said.

“I’d say it’s probably beneficial to issue an emergency authorization, which will make it easier to administer more broadly,” Stephen Jameson, a University of Minnesota immunologist, told The Daily Beast. “But it’s hardly a new breakthrough, since tens of thousands of people have already been given this—and what’s been reported so far doesn’t make it sound like this treatment will instantly cure people or anything like that.”

The announcement was set to come just a day after Trump blasted the FDA, which is led by a Trump appointee. The president accused the agency of deliberately hindering research on vaccines and therapeutic treatments to sabotage his re-election chances.

“The deep state, or whoever, over at the FDA is making it very difficult for drug companies to get people in order to test the vaccines and therapeutics,” Trump tweeted. “Obviously, they are hoping to delay the answers until after November 3rd.”

For his part, former Obama administration health official Andy Slavitt blasted the expected FDA authorization on Twitter Sunday, suggesting that the Trump administration was pushing for a political win ahead of proof that the treatment actually works.

“So why the rush?” Slavitt tweeted. “The RNC begins tomorrow. That’s it.”

Lasting immunity present in people after the covid restoration