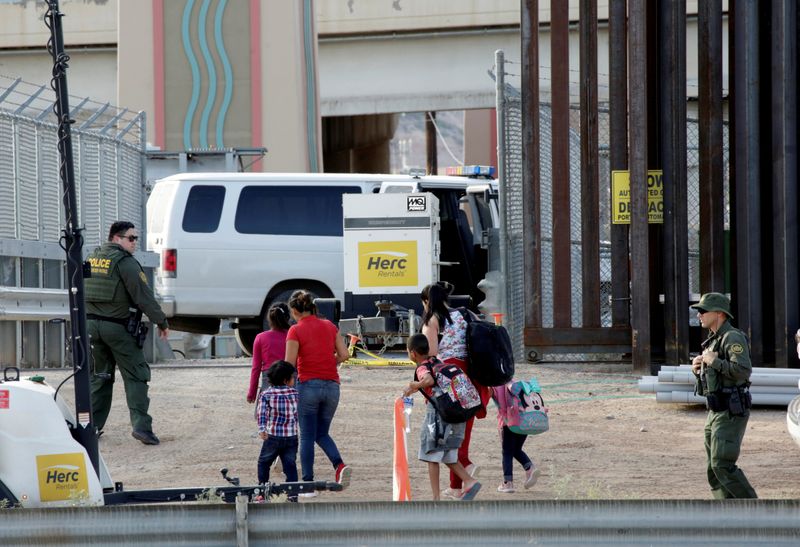 By Mimi Dwyer and Mica Rosenberg

NEW YORK (Reuters) – The Trump administration on Wednesday faced its first legal challenge to a policy that has nearly halted the U.S. asylum system as well as admissions of migrants at the U.S. border with Mexico.

A 16-year-old Honduran boy awaiting deportation from the United States under a Trump administration order issued in March that curtailed immigration due to the novel coronavirus pandemic sued the U.S. government in federal court in Washington, D.C., late on Tuesday.

The minor, referred to as J.B.B.P. in court documents, is in the custody of U.S. Customs and Border Protection and was scheduled to be deported, according to the complaint. A judge temporarily blocked the deportation on Tuesday night.

A March 20 order by the U.S. Centers for Disease Control and Prevention allows agents to deport migrants apprehended at the border – including asylum seekers and unaccompanied children – without standard legal processes, arguing there is a risk they could spread the coronavirus in the United States.

U.S. immigration authorities have allowed only four migrants’ claims for humanitarian protection to proceed since the order was issued, U.S. Citizenship and Immigration Services (USCIS) data obtained by Reuters shows. More than 20,000 people, including minors, have been expelled without proceedings from the United States under the order so far, according to CBP data.

The border expulsions rely on an obscure public health law which grants U.S. officials authority to prohibit “persons and property” from entering the United States in situations of “serious danger.”

The order restricts the ability of migrants to claim asylum in the United States and allows officials to deport border crossers “as rapidly as possible” to lower the risk of viral transmission.

The American Civil Liberties Union brought the lawsuit on behalf of J.B.B.P., alleging the order violates the 2008 Trafficking Victims Protection Reauthorization Act, which guarantees certain immigration processes to minors, as well as the public health law it cites as justification.

“The administration is free to go to Congress if it doesn’t like the asylum laws,” said Lee Gelernt, deputy director of the ACLU’s Immigrants’ Rights Project, one of the organizations representing the minor in the case.

Trump says the measure of his success against coronavirus will be the final death toll. How’s he doing?

Hyderabad NGO’s ‘Vaccination on Wheels’ is Serving to Hawkers, Homeless Get the Covid-19 Jab

Sarah Palin, COVID-19 survivor, urges everybody to put on a ‘cumbersome masks,’ use ‘widespread sense’