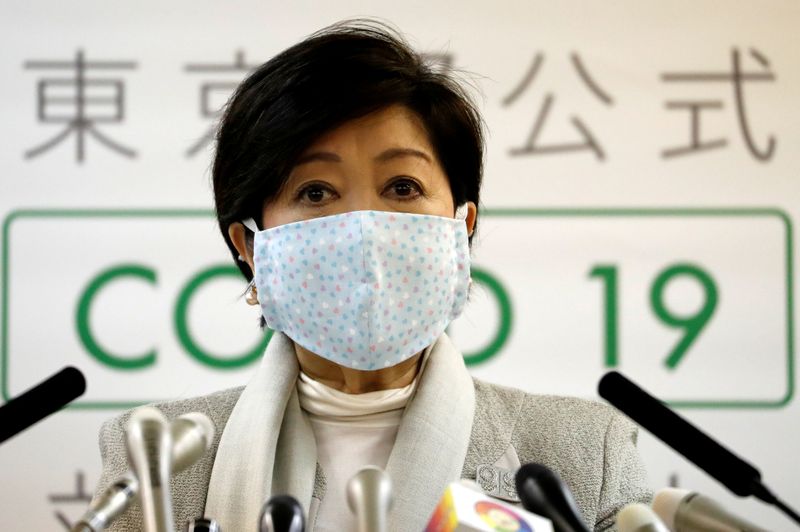 TOKYO (Reuters) – With blunt warnings, flip-charts and daily online briefings, Tokyo Governor Yuriko Koike has been delivering a tough message to the Japanese capital’s residents and shops: stay home and shut down to avert an explosive outbreak of the coronavirus.

Koike, 67, was once floated as a future premier. And her no-nonsense approach to the pathogen’s threat highlights what critics say is a timid, sluggish response by her longtime rival, Prime Minister Shinzo Abe.

Japan had 7,411 cases of infection and 138 deaths from the virus as of Monday, public broadcaster NHK said, with more than 2,000 cases in Tokyo, a sharp rise from late March.

“I think Koike is right and people should support her,” said Tokyo housewife Mikiko Fujii. “Isn’t there anyone with the guts to tell Abe he’s wrong?”

Sixty-four percent disapproved of Abe’s handling of the virus outbreak in a survey by Sankei newspaper and Fuji News Network released on Monday, up 25.1 points from a late March poll.

Koike’s sterner stance has also pushed other governors to call on businesses to close despite the central government’s urging them to wait, a rare move in a country where national politicians typically rule the roost.

The step gave legal authority to governors in Tokyo and six other potential hotspot prefectures to ask people to stay home and businesses to close, although there are no penalties for non-compliance.

But a feud over the scope and timing of business shutdowns kept Koike from making her requests during what the Nikkei financial daily called a “72-hour vacuum”, as Abe sought to limit the pandemic’s economic fallout.

“I thought governors would get authority akin to a CEO but … I feel more like a middle manager,” Koike said after winning a battle to ask pachinko parlours to close but bowing to pressure to keep barbershops and home-furnishing centres open.

Abe has stressed the need to avoid going out and urged businesses to allow telework, aiming at an 80% reduction in person-to-person contact.

But his government has been reluctant to push for broad business closures for fear of further damage to an economy that was already on the verge of recession before the outbreak. Many businesses have called for direct compensation for lost revenue if they close, a cost that the government is wary of shouldering.

While crowds have shrunk, many people are still out and about. Population in Shinjuku in central Tokyo was down about 33% last Friday compared to Tuesday before the emergency was declared, according to data published by the government.

“Either you have a health emergency, or you don’t. If you do, you don’t take half-baked steps,” said Jesper Koll, chief executive of asset manager WisdomTree Japan and veteran Japan analyst.

“Where Koike stands out is she is giving people what they want – strong leadership that exudes confidence,” Koll said.

A former TV announcer with well-honed communication skills, Koike warned in late March that Tokyo could face a Western-style “lockdown” and called for an early state of emergency.

Koike was Japan’s first female defence minister and the first woman to run, albeit unsuccessfully, for leader of the ruling Liberal Democratic Party. She shares some conservative views with Abe, such as a desire to revise the pacifist constitution.

She echoed Abe’s reluctance to postpone the 2020 Tokyo Olympics until the virus outbreak made delay inescapable.

But she has also clashed with Abe.

She bolted from the LDP in 2016 to make a successful bid to become Tokyo governor, and a year later formed an upstart party in hopes – quickly dashed – of ousting the LDP from power.

Still, the LDP is not expected to challenge her reelection as governor in July.

“It’s true she is popular as governor,” said one LDP source.

The US has run out of time and excuses. Now we’ll be compelled to look at hundreds die of the coronavirus.