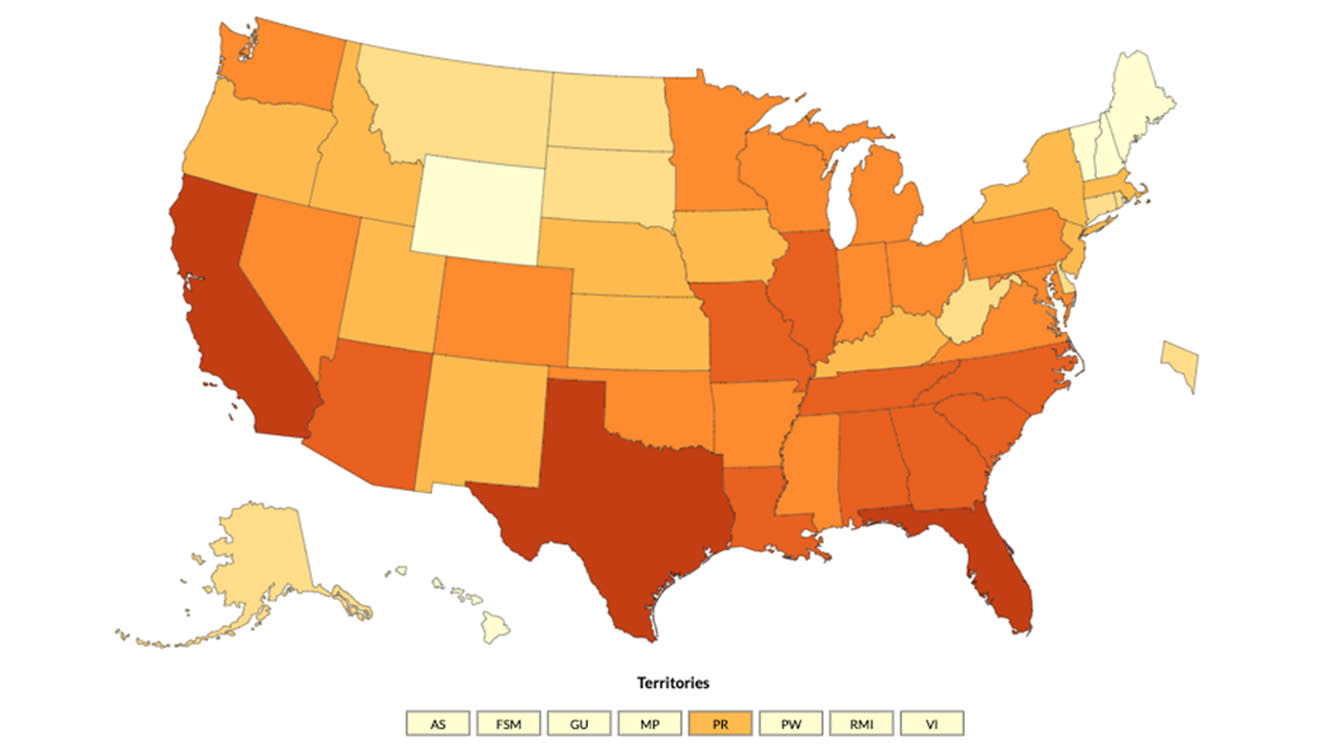 A report released this week by the Trump administration’s coronavirus task force warns that 21 states are now in the “red zone” and need to take aggressive steps to slow the spread of COVID-19.

The Trump task force, for instance, doesn’t advise authorities to issue stay-at-home orders — anywhere. But if the Harvard experts had their way, 13 states would lock down right now. Another 22 would be considering lockdowns.

The White House task force and the Harvard researchers are relying on the same data. They’re using similar color-coded risk charts. They even share a goal: to provide clear metrics that will “help communities determine the severity of the outbreak they are responding to,” as the Harvard initiative puts it, then offer “broad guidance on the intensity of control efforts needed based on these COVID risk levels.”

Yet Harvard and the Trump task force arrive at very different conclusions about how communities should be responding.

This difference underscores the ongoing inconsistency of America’s efforts to combat COVID-19. It also raises the question of whether Americans will look back on unheeded recommendations such as Harvard’s with regret this fall, when colder weather, increased indoor activity and, in many places, a return to in-person schooling compound the risk of a second wave of infection — especially if dozens of states remain in the so-called red zone.

“The public needs clear and consistent information about COVID risk levels in different jurisdictions for personal decision-making, and policy-makers need clear and consistent visibility that permits differentiating policy across jurisdictions,” said Danielle Allen, director of Harvard’s Safra Center. “We also collectively need to keep focused on what should be our main target: a path to near zero case incidence.”

Harvard and the Trump task force define the red zone differently, but both base their color-coded risk levels on a key metric: the seven-day average of new daily COVID-19 cases per 100,000 people.

Basically, the seven-day average of new daily COVID-19 cases per 100,000 people is just a simple way to track how much virus is circulating in a particular population.

The Harvard team, meanwhile, has four risk levels. Red is any place that averaged more than 25 new daily cases per 100,000 people over the last seven days. Orange is between 10 and 25. Yellow is between one and 10. And green is fewer than one.

In short, the two groups categorize states in different ways. But that’s only a superficial difference. The real difference is what they’re telling residents and authorities to do when cases reach a certain threshold in their area.

Let’s say that threshold is 14.3 new daily cases per 100,000 people — the Trump task force’s red zone. According to the feds, residents in this red zone should “wear a mask at all times outside the home and maintain physical distance” and “reduce your public interactions and activities to 25 percent of your normal activity.”

At the same time, public officials should “close bars and gyms and create outdoor dining opportunities with pedestrian areas,” “limit social gatherings to 10 people or fewer” and “ensure that all business retailers and personal services require masks and can safely social distance.”

But nowhere does the Trump task force say that public officials in a red zone should require residents to “stay at home.”

In contrast, the Harvard group says that “at the red level, jurisdictions have reached a tipping point for uncontrolled spread and will require the use of stay-at-home orders and/or advisories to mitigate the disease.”

A member of the medical staff treats a patient who is wearing a helmet-based ventilator in the COVID-19 intensive care unit at the United Memorial Medical Center in Houston on Tuesday. (Go Nakamura/Getty Images)

In the orange zone, Harvard says, “community spread has accelerated” to “dangerous levels” and “stay-at-home orders are advised” (unless “viral testing and contact tracing capacity” are sufficiently robust).

If implemented, the Harvard framework wouldn’t necessarily force entire states to stay at home. In fact, the group has produced a county-by-county COVID-19 risk map and argues that “policy decisions about which strategies of disease response are best for a jurisdiction should be made by looking at both the local level and the state picture and considering the dynamic relationship between them.”

Nationwide, however, it would mean putting targeted lockdowns back on the table, followed by dramatically expanded testing and tracing.

That’s a solution the Trump task force has shied away from, even as it acknowledges the severity of a pandemic that has infected at least 4.4 million Americans, killed 150,000 and now, after a brief late-spring plateau, propelled more than 40 percent of U.S. states into its self-described red zone.

In recent days, case growth in some of those states has started to stabilize, or even decline. That has led Trump to declare, as he did earlier this week, that “a lot of governors should be opening up states that they’re not opening up.”

But the point the Harvard group is making is that even if spread is slowing, there’s still too much virus circulating to ease up now. The goal should be suppression, they say: striving for zero cases instead of just somewhat mitigating the current spread.

A suppression strategy is “the most efficient path toward a restored economy without future lockdowns,” the Harvard team explained. “Successful suppression efforts can work relatively fast to restore jurisdictions to near-zero case incidence in a matter of 1-2 months.”

Dr. Anthony Fauci, the nation’s top infectious disease expert, echoed this advice in a new interview with Wired. Asked why “the US has done so poorly in suppressing this pandemic compared with other rich countries,” Fauci highlighted the importance of locking down “in full force.”

“Other, certainly Asian countries, and certainly the European Union, when they so-called locked down — shut down, shelter in place, whatever you want to call it — they did it to about 95 percent of their countries,” he said. “Some countries got hit badly, but once they locked down and turned things around, they came down to a very low baseline — down to tens or hundreds of new cases a day, not thousands. They came down and they stayed down.

“Now, in the United States, when we shut down, even though it was a stress and a strain for a lot of people, we only did it to the tune of about 50 percent of the country shutting down,” Fauci continued. “Our curve goes up and starts to come down. But we never came down to a reasonable baseline. We came down to about 20,000 new infections per day, and we stayed at that level for several weeks in a row. Then we started to open up — getting America ‘back to normal’ — and started to see the cases go from 20,000 a day to 30,000, 40,000. We even hit that one point last week of 70,000 new cases a day.”

In other words, if we want to suppress COVID-19 to the level that would actually make a full reopening safe — if we want the whole country to be in the yellow zone, heading toward green — then the path we’re currently on won’t get us there before a vaccine arrives.

Instead, we may spend the rest of the summer making the same mistake we made in the spring — and setting ourselves up for a very rough fall.

Can Moms Cross on Covid-19 to New child Infants? That is What a New Research Reveals

The White Home coronavirus response chief mentioned the winter surge would be the worst occasion in US historical past, ‘not simply the worst public well being occasion’