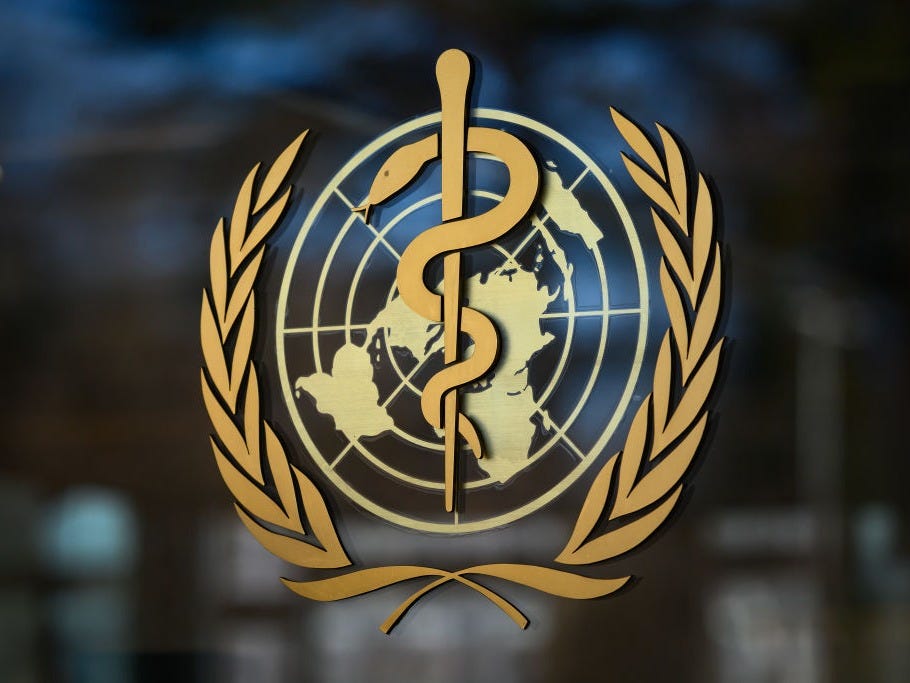 The logo of the World Health Organization at its Geneva headquarters.

The World Health Organization lavished China with praise early in the coronavirus outbreak to flatter its into handing over its data, the Associated Press (AP) reported.

The AP obtained recordings in which WHO officials criticized China for being slow to hand over the genetic map of the virus and detailed patient data.

So the WHO used flattery to try and coax data out. For example, on January 22, the WHO praised China’s “rapid identification of the virus and sharing of the genetic sequence,” despite the delay.

The AP report suggests the WHO struggled to get China to share data quickly. China, meanwhile, insists it released data “at the earliest possible time.”

President Donald Trump has repeatedly accused the WHO of pandering to China.

The World Health Organization (WHO) lavished China with praise early in the coronavirus outbreak in an attempt to flatter it into handing over data, a new Associated Press (AP) investigation has found.

China informed the WHO about the virus on December 31, 2019, and in early January 2020, as the virus spread in Hubei province, the WHO asked China to hand over the genetic map of the virus and detailed patient data.

But it took until January 12 for China to hand over the genetic sequence, and two more weeks to hand over patient data. China has been widely accused of covering up the virus in its early days.

So the WHO turned to flattery to try and speed up the process, according to AP, which had obtained internal WHO documents and meeting audio.

Cleaners wash a street in the quarantined city of Wuhan with a high-pressure water gun on February 3, 2020.

On January 22, the WHO praised China’s “rapid identification of the virus and sharing of the genetic sequence.”

And on January 30, WHO director general Tedros Adhanom Ghebreyesus gushed about China’s response.

“The speed with which China detected the outbreak, isolated the virus, sequenced the genome and shared it with WHO and the world are very impressive, and beyond words,” he said at the time.

“China is actually setting a new standard for outbreak response. It’s not an exaggeration.”

But in recordings of high-level meetings obtained by the AP, WHO officials had complained of China’s inaction.

Here’s what’s in the audio recordings, according to the AP:

“We’re going on very minimal information,” US epidemiologist Maria Van Kerkhove said in a January 6 meeting. “It’s clearly not enough for you to do proper planning.”

In another meeting, the WHO’s top official in China, Dr. Gauden Galea, said: “We’re currently at the stage where yes, they’re giving it to us 15 minutes before it appears on CCTV,” the state-run TV channel.

In another meeting Galea said: “We have informally and formally been requesting more epidemiological information. But when asked for specifics, we could get nothing.”

Dr. Michael Ryan, WHO chief of emergencies, said China had also stalled in giving data during the SARS outbreak.

“This is exactly the same scenario, endlessly trying to get updates from China about what was going on,” he said, according to the AP. “WHO barely got out of that one with its neck intact given the issues that arose around transparency in southern China.”

‘We should have actually expressed … gratitude to China’

The WHO’s internal discussions, as reported by the AP, appear to run counter to the WHO’s public messaging at the time.

On January 5, in the first public press release on the virus, the WHO said it had “requested further information on the laboratory tests performed and the differential diagnoses considered.”

Despite the apparent lack of cooperation, Tedros — the WHO’s director — said on January 30 that China had allowed an international expert team to study the virus in China.

“We should have actually expressed our respect and gratitude to China for what it’s doing,” he said. “It has already done incredible things to limit the transmission of the virus to other countries.”

The AP report suggests that the WHO struggled to get China to share data as fast as the country should have.

China, meanwhile, insists it provided the WHO with data as and when it became available.

“We have provided information to WHO and relevant countries in a most timely fashion. We have released the genome sequence at the earliest possible time,” Chinese president Xi Jinping said on May 18.

WHO director general Tedros with Chinese President Xi Jinping at the Great Hall of the People in Beijing on January 28, 2020.

Trump says the WHO is a ‘puppet of China’

The praise heaped on China by the WHO has led to the US accusing the WHO of helping China cover up the outbreak.

The WHO is a “puppet of China,” President Donald Trump said on May 19.

China has also sought to curry favor with the WHO in recent weeks, in what experts say is an attempt to boost political influence over the agency.

In March and April, China had pledged a total of $50 million in extra contributions to the WHO. One expert told Business Insider’s Rosie Perper the extra funding was an effort to “boost its superficial credentials” in the pandemic.

Last month, at the World Health Assembly, Xi also pledged $2 billion over the next two years to the WHO in its fight against the virus.