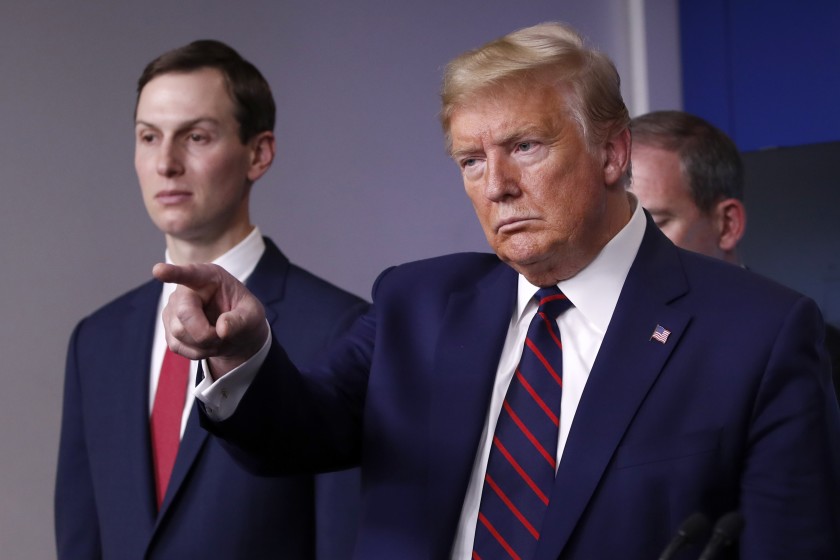 In a presidency that has produced more than its share of head-spinning moments, last week ranks among the worst.

President Trump decided to disband the White House task force charged with leading the federal response to the coronavirus crisis — then, just as abruptly, decided not to.

“I had no idea how popular the task force is,” he explained, which suggested that his retreat was a momentary concession to public opinion, not a sign that he would listen to the experts.

Indeed, Trump said he wants the panel to switch its focus to his current theme: Whether or not the pandemic is ending, it’s time to “reopen the country.”

So the task force won’t be dismantled, just demoted and diverted from its initial purpose.

No matter how Trump spins that move, it will run into two huge obstacles.

First, the pandemic isn’t over. Infections and deaths are still rising. Second, he hasn’t answered the question that prompted him to create a task force in the first place: Who’s in charge here?

When the group started work in January, it was headed by Secretary of Health and Human Services Alex Azar. But Azar, a former drug company lobbyist, wasn’t a commanding presence on television, a key qualification in Trump world, and his star quickly faded.

So did Trump’s role as ill-informed spokesman for the task force night after night, finally imploding with his dangerous suggestion that doctors consider injecting COVID-19 patients with household disinfectants. He relinquished the podium a few days later.

A week earlier, in a brief moment of clarity, the panel’s top medical experts, Deborah Birx and Anthony Fauci, had produced broad guidelines for states to follow before lifting their lockdown orders.

But Trump, frustrated by the slow pace of reviving the economy, encouraged governors to ignore the guidelines he had publicly embraced.

Now he wants to get out of the pandemic business entirely and make governors and mayors take over. His initial decision to dismantle the task force was an exercise in messaging, not management.

But the president can’t have that luxury. Americans still expect their president to lead in a crisis.

And the federal government still has a big role to play — in administering emergency funding, serving as a backstop for medical supplies, funding medical research and approving new medicines and vaccines, among other responsibilities.

Somebody has to manage the job.

In a well-run administration, the answer would be easy: a panel of strong Cabinet secretaries, reporting to the White House chief of staff or a coordinator who would inevitably be dubbed a “czar.”

But that can’t happen in this administration, because the right people aren’t in place.

Azar, a target of White House backbiting, doesn’t command respect across the government. Some reports suggest he’s already on the edge of being fired.

The Department of Homeland Security, another key player, hasn’t had a Senate-confirmed secretary for more than a year. And when the pandemic hit, the White House was transitioning from Trump’s third chief of staff, Mick Mulvaney, to his fourth, Mark Meadows.

Besides, empowering underlings isn’t Trump’s style. He has bragged that he prefers acting secretaries because he can keep them on a shorter leash. His first three chiefs of staff ended their tenures in frustration after Trump ignored or defeated their efforts to impose discipline.

Rapid staff turnover at the White House is a problem, too.

Kathryn Dunn Tenpas, a scholar at the nonpartisan Brookings Institution, reported last week that staff turnover in Trump’s White House has set a dubious new record. One example: Of the 30 top aides who worked on emergency preparedness when Trump arrived in 2017, only eight are left.

“Turnover matters,” Tenpas told me. “There’s hardly anybody there with the experience, relationships or institutional memory they need to do their jobs well.”

The shambolic White House response to the pandemic fits a well-established pattern. This president doesn’t manage crises, he causes them.

In his first week in office, his ban on immigrants from Muslim countries caused chaos at airports. His sudden decision this year to ban most travel from Europe did too.

Trump has never claimed that he’s much of a strategic thinker. In his ghostwritten 1987 book, “The Art of the Deal,” he described his management style this way:

“I play it very loose…. You can’t be imaginative if you have too much structure. I prefer to come to work every morning and just see what develops.”

His own aides sometimes describe him as “mercurial,” a polite word for erratic.

But chaos is consequential, especially in a pandemic. When hospitals run short on equipment and supplies, a disorganized supply chain means people die needlessly.

Trump can disband the task force if he wants. There are plenty of other ways to manage the federal response. He can rename it, redirect it and remodel it all he likes.

But the rest of us are still mired in a public health catastrophe and an economic calamity. Until the president finds a competent crisis manager and empowers that person to do the job, the chaos of the last three months can only persist.

Intermittent Fasting Would possibly Assist Scale back Headaches from Covid-19, Unearths Learn about