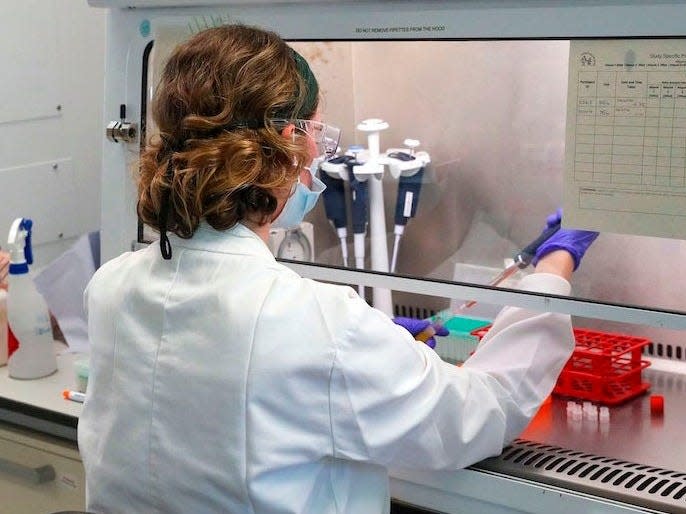 The pharmaceutical company AstraZeneca received some long-awaited good news on Monday: The company’s coronavirus vaccine, developed in partnership with the University of Oxford, was found to be 70% effective on average in late-stage clinical trials with more than 20,000 volunteers in the UK and Brazil.

The results varied depending on the dosage.

As young adults in their 20s, Gilbert’s children fit the typical profile of a vaccine-trial volunteer. To participate in AstraZeneca’s trials, volunteers must be at least 18 years old. They must also be healthy or have a stable underlying medical condition.

Gilbert told Bloomberg in July that she wasn’t worried about her children joining the trial.

“We didn’t really discuss it as I wasn’t home much at the time,” she said, adding, “We know the adverse event profile and we know the dose to use, because we’ve done this so many times before.”

Gilbert is a veteran vaccine researcher. She joined the University of Oxford as a senior postdoctoral researcher in 1994. Five years later, she became a university lecturer — just one year after giving birth to premature triplets.

Her partner, Rob Blundell, a scientist, became the family’s primary caretaker. Gilbert, meanwhile, rose to prominence at Oxford, receiving funding to lead her own research group on flu-vaccine development in 2007.

“Nursery fees would have cost more than my entire income as a post-doctoral scientist, so my partner has had to sacrifice his own career in order to look after our children,” Gilbert said in her university bio.

All three of her children now study biochemistry. Gilbert’s daughters, Caitlin and Susannah, attend Oxford, while her son, Freddie, goes to the University of Bath.

A researcher in a lab. STEVE PARSONS/POOL/AFP via Getty Images

Since the start of the pandemic, Gilbert has emerged as a trusted scientific voice and the public face of AstraZeneca’s trial. She has been profiled several times, interviewed on television, and even named one of the BBC’s 100 inspiring and influential women of 2020.

“I, for one, 100% trust the lady who injected her own kids,” Merve Emre, an associate English professor at Oxford, wrote on Twitter.

A speedy quest to develop a vaccine

Before the novel coronavirus, SARS-CoV-2, came into existence, Gilbert was studying a similar human coronavirus: MERS-CoV. The virus causes Middle East respiratory syndrome, which has infected just 2,500 people worldwide but is far deadlier than COVID-19.

Gilbert’s MERS vaccine advanced to a phase-one clinical trial in December 2019, just as the novel coronavirus was starting to spread in China.

Her COVID-19 vaccine now uses a similar technology. Both shots rely on a chimpanzee virus called ChAdOx1 to trigger an immune response in humans.

This type of shot, known as a viral vector vaccine, is relatively easy to develop compared with traditional vaccines. Gilbert’s team designed their vaccine within days of getting their hands on the SARS-CoV-2 genome. In April, Gilbert predicted that her vaccine could be available in six months.

“I have a high degree of confidence about this vaccine, because it’s technology that I’ve used before,” she told CBS News.

For a while, it looked as if AstraZeneca would hit that milestone. But the company briefly paused its trials in September after an “unexplained illness” in one UK participant.

The UK trial resumed less than a week later, after local regulators determined it was safe to do so. In a press release, Oxford said that “no serious safety events related to the vaccine have been identified.”

The company’s US trial, however, didn’t receive the go-ahead from the Food and Drug Administration to resume until October. That means its results are slightly delayed, though experts think they could still be released this winter.

But unlike these vaccines, the AstraZeneca shots don’t need to be stored at below-freezing temperatures, which would make them easier to distribute worldwide.

On Monday, an AstraZeneca spokesman told STAT News that the company was considering adding the half-dose regimen to its ongoing clinical trials.

“This vaccine should do what we always wanted it to do,” Gilbert said on a call on Monday. “We wanted a vaccine for the world, not just for high-income countries.”