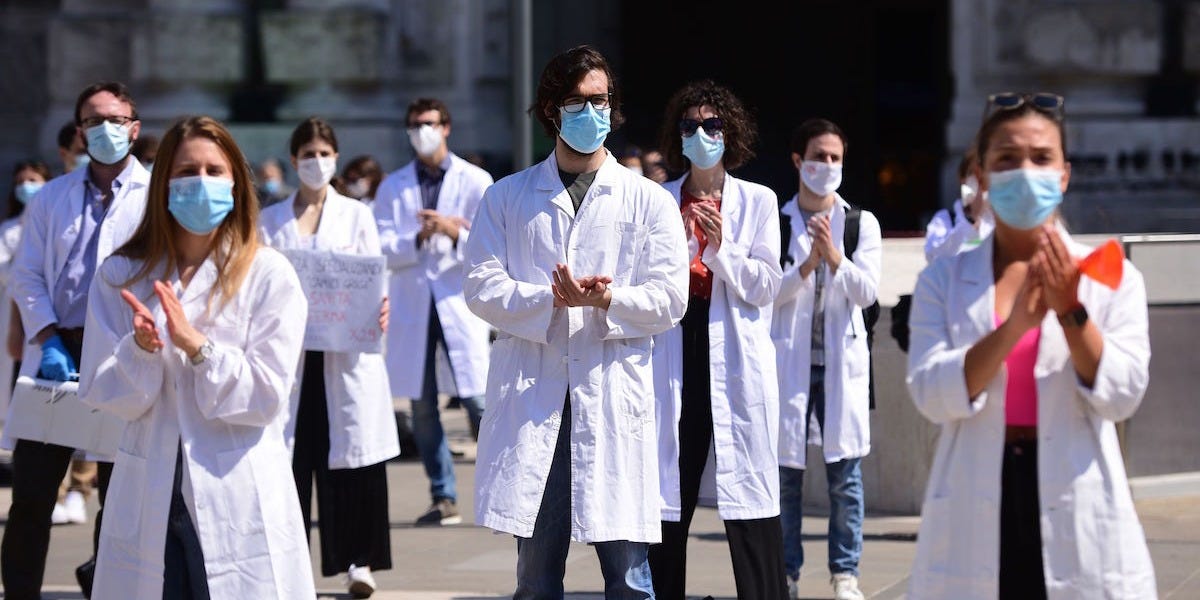 Medical students, newly qualified doctors, and doctors in training protest in Milan on Friday, asking for an educational reform of medical training. The country is easing its lockdown measures aimed at curbing the spread of COVID-19.

Italy has been one of the worst-affected countries in the global coronavirus pandemic.

However, the COVID-19 virus is now disappearing in the country according to Italian doctors

Alberto Zangrillo, who heads a hospital in Milan, said that “in reality, the virus clinically no longer exists in Italy.”

A leading doctor in Genoa said that “the strength the virus had two months ago is not the same strength it has today.”

An Italian health minister said their claims were not yet scientifically proved.

Related Video: Can You Get the COVID-19 Coronavirus Twice?

The coronavirus is disappearing in Italy, with some Italian doctors suggesting the virus is losing its potency.

“The swabs that were performed over the last 10 days showed a viral load in quantitative terms that was absolutely infinitesimal compared to the ones carried out a month or two months ago,” Zangrillo added.

“We’ve got to get back to being a normal country,” he said. “Someone has to take responsibility for terrorizing the country.”

Matteo Bassetti, the head of San Martino Hospital’s infectious-diseases clinic in Genoa, in northwestern Italy, agreed with Zangrillo that the coronavirus was not as lethal as it used to be.

“The strength the virus had two months ago is not the same strength it has today,” Bassetti told an Italian news agency, adding that “it is clear that today the COVID-19 disease is different.”

Italy has one of the world’s highest confirmed COVID-19 death tolls, at 33,415 people as of Monday morning. The true number of deaths is believed to be significantly higher.

However, the number of confirmed daily new cases in the country has dropped from a peak of about 6,500 in March to about 300 a day at the end of May.

Nuns wearing protective masks and gloves pray during the celebration of the Regina Coeli in St. Peter’s Square in Vatican City on Sunday.

Sandra Zampa, a health minister in Conte’s government, said there was insufficient evidence to back up the doctors’ claims and urged Italians to continue following social-distancing guidelines with “maximum caution.”

“Pending scientific evidence to support the thesis that the virus has disappeared … I would invite those who say they are sure of it not to confuse Italians,” Zampa said in a statement, according to Reuters.

“We should instead invite Italians to maintain the maximum caution, maintain physical distancing, avoid large groups, to frequently wash their hands and to wear masks,” Zampa added.

Conte’s government has been gradually reopening Italy’s society and economy after weeks of strict lockdown measures.

Last month, the country’s hospitality industry reopened, with restaurants, bars, and cafes opening their doors to the public for the first time in weeks, as well as leisure facilities such as gyms, sports centers, and swimming pools.

Travel in and out of Italy is set to resume this week, with visitors from other European Union member states no longer required to self-isolate for two weeks. Cinemas and theaters in Italy are set to reopen later this month.

What Occurs If a Covid-19 Optimistic Affected person Takes the Vaccine?

College employee in NC dies after getting COVID-19, household says. ‘Her physique was so drained’