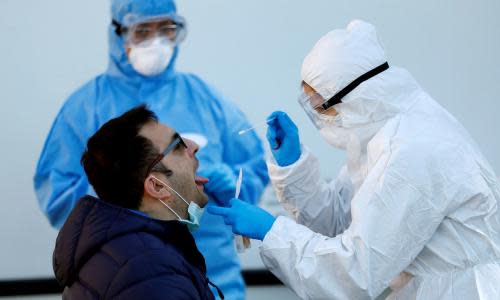 Conventional wisdom suggests that when a sickness is mild, it’s not too much to worry about. But if you’re taking comfort in World Health Organization reports that over 80% of global Covid-19 cases are mild or asymptomatic, think again. As virologists race to understand the biomechanics of Sars-CoV-2, one thing is becoming increasingly clear: even “mild” cases can be more complicated, dangerous and harder to shake than many first thought.

Throughout the pandemic, a notion has persevered that people who have “mild” cases of Covid-19 and do not require an ICU stay or the use of a ventilator are spared from serious health repercussions. Just last week, Mike Pence, the US vice-president, claimed it’s “a good thing” that nearly half of the new Covid-19 cases surging in 16 states are young Americans, who are at less risk of becoming severely ill than their older counterparts. This kind of rhetoric would lead you to believe that the ordeal of “mildly infected” patients ends within two weeks of becoming ill, at which point they recover and everything goes back to normal.

While that may be the case for some people who get Covid-19, emerging medical research as well as anecdotal evidence from recovery support groups suggest that many survivors of “mild” Covid-19 are not so lucky. They experience lasting side-effects, and doctors are still trying to understand the ramifications.

Some of these side effects can be fatal. According to Dr Christopher Kellner, a professor of neurosurgery at Mount Sinai hospital in New York, “mild” cases of Covid-19 in which the patient was not hospitalized for the virus have been linked to blood clotting and severe strokes in people as young as 30. In May, Keller told Healthline that Mount Sinai had implemented a plan to give anticoagulant drugs to people with Covid-19 to prevent the strokes they were seeing in “younger patients with no or mild symptoms”.

Doctors now know that Covid-19 not only affects the lungs and blood, but kidneys, liver and brain – the latter potentially resulting in chronic fatigue and depression, among other symptoms. Although the virus is not yet old enough for long-term effects on those organs to be well understood, they may manifest regardless of whether a patient ever required hospitalization, hindering their recovery process.

Another troubling phenomenon now coming into focus is that of “long-haul” Covid-19 sufferers – people whose experience of the illness has lasted months. For a Dutch report published earlier this month (an excerpt is translated here) researchers surveyed 1,622 Covid-19 patients with an average age of 53, who reported a number of enduring symptoms, including intense fatigue (88%) persistent shortness of breath (75%) and chest pressure (45%). Ninety-one per cent of the patients weren’t hospitalized, suggesting they suffered these side-effects despite their cases of Covid-19 qualifying as “mild”. While 85% of the surveyed patients considered themselves generally healthy before having Covid-19, only 6% still did so one month or more after getting the virus.

After being diagnosed with Covid-19, 26-year-old Fiona Lowenstein experienced a long, difficult and nonlinear recovery first-hand. Lowenstein became sick on 17 March, and was briefly hospitalized for fever, cough and shortness of breath. Doctors advised she return to the hospital if those symptoms worsened – but something else happened instead. “I experienced this whole slew of new symptoms: sinus pain, sore throat, really severe gastrointestinal issues,” she told me. “I was having diarrhea every time I ate. I lost a lot of weight, which made me weak, a lot of fatigue, headaches, loss of sense of smell …”

By the time she felt mostly better, it was mid-May, although some of her symptoms still routinely re-emerge, she says.

“It’s almost like a blow to your ego to be in your 20s and healthy and active, and get hit with this thing and think you’re going to get better and you’re going to be OK. And then have it really not pan out that way,” says Lowenstein.

Unable to find information about what she was experiencing, and wondering if more people were going through a similarly prolonged recovery, Lowenstein created The Body Politic Slack-channel support group, a forum that now counts more than 5,600 members – most of whom were not hospitalized for their illness, yet have been feeling sick for months after their initial flu-like respiratory symptoms subsided. According to an internal survey within the group, members – the vast majority of whom are under 50 – have experienced symptoms including facial paralysis, seizures, hearing and vision loss, headaches, memory loss, diarrhea, serious weight loss and more.

“To me, and I think most people, the definition of ‘mild’, passed down from the WHO and other authorities, meant any case that didn’t require hospitalization at all, that anyone who wasn’t hospitalized was just going to have a small cold and could take care of it at home,” Hannah Davis, the author of a patient-led survey of Body Politic members, told me. “From my point of view, this has been a really harmful narrative and absolutely has misinformed the public. It both prohibits people from taking relevant information into account when deciding their personal risk levels, and it prevents the long-haulers from getting the help they need.”

At this stage, when medical professionals and the public alike are learning about Covid-19 as the pandemic unfolds, it’s important to keep in mind how little we truly know about this vastly complicated disease – and to listen to the experiences of survivors, especially those whose recoveries have been neither quick nor straightforward.

It may be reassuring to describe the majority of Covid-19 cases as “mild” – but perhaps that term isn’t as accurate as we hoped.

Dr. Deborah Birx, who had been one of the White House’s chief coronavirus response coordinators, said Friday she considered quitting…