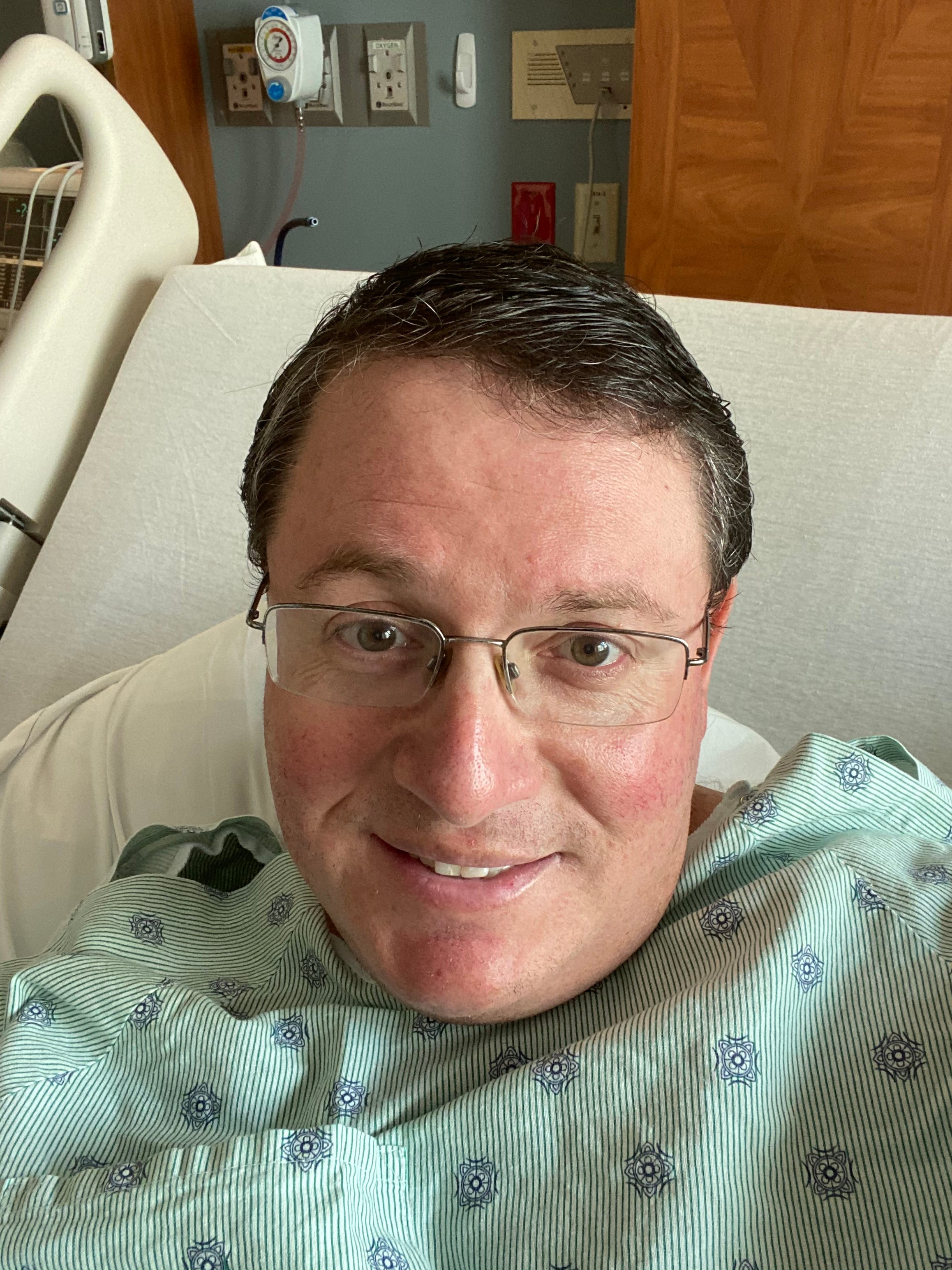 After two weeks battling COVID-19, State Rep. Randy Fine (R-Palm Bay) posted on Facebook that he needed his lungs X-rayed as his symptoms now included a recurring fever and a hacking chest cough. He remarked that the hydroxychloroquine therapy he had been on proved ineffective.

“I’ve had a cold who knows how many times. I have never had to deal with anything like this. And for those who want to believe that (hydroxychloroquine) is some kind of magic solution, I’ve been taking that too (I don’t oppose it, but I am tired of people pretending it is magic),” he wrote in the post.

By the time the X-ray images came back showing lung damage serious enough that doctors ordered Fine to stay for observation, a debate over hydroxychloroquine raged on Fine’s Facebook page.

“Hydroxychloroquine as stated by many Doctors here and abroad is very effective. Had you been given that at the outset you might think it was magic indeed…” wrote one user.

“Was given it the day my test came back,” Fine replied. “Sorry to burst the magic bubble.”

A selfie by Republican State Rep. Randy Fine from his hospital bed at Holmes Regional Medical Center on Aug 4., 2020 where he was admitted for observation for COVDI-19.

Further on, netizens commented that surely Fine must have not been taking the drug “as prescribed” or following “protocol” (there is none established by any medical authority).

“I’m over it,” Fine texted FLORIDA TODAY from his Holmes Regional Medical Center hospital bed on Monday. “People should be able to use it if they want. But people should stop pretending it is some kind of magic potion as well. If they need proof, look at me.”

Since the early days of the pandemic, excitement over the possibility that cheap, widely available drugs might be repurposed to combat the novel coronavirus has spurred a flurry of research and clinical trials. But one non-peer reviewed, clinical study from France, which has been widely derided for its shoddy methodology, including randomly eliminating test subjects without explanation, and small sample size, touted the effectiveness of the decades old anti-malarial drug hydroxychloroquine when used alongside azithromycin the antibiotic commonly sold as Z-Pak.

Fervor around a possible miracle cure exploded, fueled by anecdotal reports that patients recovered suddenly after taking the drug. Before science could validate the results of the study, the drug was seized on by President Donald Trump who along with allies such as Florida Gov. Ron DeSantis secured vast quantities of the untested “cure” at taxpayer’s expense.

More: The coronavirus therapy President Trump is gambling on is backed by weak scientific data

A pharmacist shows a bottle of the drug hydroxychloroquine on April 6, 2020, in Oakland, California. The malaria drug is not yet officially approved for fighting the new coronavirus, and scientists say more testing is needed before it’s proven safe and effective against COVID-19.

But successive clinical trials following standard scientific methods failed to replicate the results touted by the flawed studies that championed the therapy. The scientific consensus is that there is no measurable impact from taking the drug, alone, or alongside other medications.

U.S. health authorities began recommending against the use of the therapy outside of the controlled setting of a clinical trial because of the risk of adverse side-effects.

More: New guidelines ‘recommend against’ use of much-touted COVID-19 therapy outside of clinical trials

On Jul. 22 the highly-respected journal Nature published a first of it’s kind study that looked at live human lung cells and found definitively that chloroquine had no anti-viral properties when it came to the virus that causes COVID-19.

The argument appeared to be settled.

Then, last week, President Trump again touted hydroxychloroquine after a group of physicians calling themselves “America’s Frontline Doctors” staged a press conference in front of the Supreme Court building in Washington D.C.

A video of one of the doctors, Stella Immanuel, claiming that a combination of hydroxychloroquine, azithromycin and the nutritional supplement zinc were a cure quickly went viral. Even as social media platforms feverishly tried to take down the video for containing false and misleading claims it was re-posted by President Trump, major right-wing personalities and Donald Trump Jr.

A screenshot from the Tea Party Patriots website shows video of the group that calls itself America’s Frontline Doctors speaking earlier this week in Washington.

Dr. Immanuel’s credentials have since come under scrutiny, along with her prior claims that certain real-life ailments are caused by sexual intercourse with demons.

This prompted assistant secretary for Health and Human Services, Adm. Brett Giroir, who was appointed to the White House’s coronavirus task force to coordinate testing efforts, to say on ‘Meet the Press’ Sunday that it was time to “move on” and that the government does not recommend the therapy.

“The most well-designed studies so far, that are not anecdotal, but are actual studies, have indicated that there does not appear to be any beneficial effect on the use of hydroxychloroquine,” said Jay Wolfson a public health policy expert and senior associate dean at the University of South Florida’s medical school.

Despite this, believers in the treatment have persisted.

“Yup. Sorry to burst the magic bubble,” Fine shot back.

A selfie by Republican State Rep. Randy Fine from his hospital bed at Holmes Regional Medical Center on Aug 4., 2020 where he was admitted for observation for COVDI-19.

In fact Fine said he took the drugs on the recommendation and prescription of his doctor, and contrary to assertions that the public is being denied access to the drug, Fine said he had no problem filling his prescription at CVS.

Certain states have curtailed easy access to hydroxychloroquine to prevent hoarding that was endangering access for patients with Lupus who also need the drug. But anybody with a prescription from a doctor willing to prescribe it for COVID-19, in theory, has access.

Fine has now stopped responding to commenters asking about whether he was taking the therapy.

“I just got tired of every time I made an update people stating that if I just took (hydroxychloroquine) I’d be magically healed which was particularly frustrating because I was taking it,” he told FLORIDA TODAY in a text.

“Much of COVID has become politics as opposed to science,” said USF’s Wolfson. “And it’s an old issue of science being viewed in some social circles as being antithetical to belief systems.”

Whether it was polio or smallpox, Wolfson said resistance to science and public health expertise, despite concerted public information campaigns, has always been an issue.

“It took a long enough time where enough people died or were affected by it, that both individuals and communities and political systems and communities, took action. We’ve only been at this for seven months in this country.”

Only then, Wolfson said, will the walls individual’s belief systems have erected come down.

For Fine the situation is reminiscent of the polarization over masks. “It’s like people can no longer accept disagreement with their view.”

It should be noted that Wolfson has been retained as an expert witness for Hillsborough County, which is fighting against a lawsuit to repeal their mask mandate brought by Republican State Rep. Anthony Sabatini (R—Howey in the Hills).

Fine, for his part, thinks it’s a matter of people needing to feel comforted during a difficult time.

“I think perhaps some people are clinging to this to psychologically manage their anxiety over the disease.” he continued, adding “because if some pill can magically make it go away who has to worry?”

Alessandro Marazzi Sassoon is a watchdog reporter at FLORIDA TODAY.

What are the blood clots being brought on by the Johnson & Johnson COVID-19 vaccine? Four questions answered