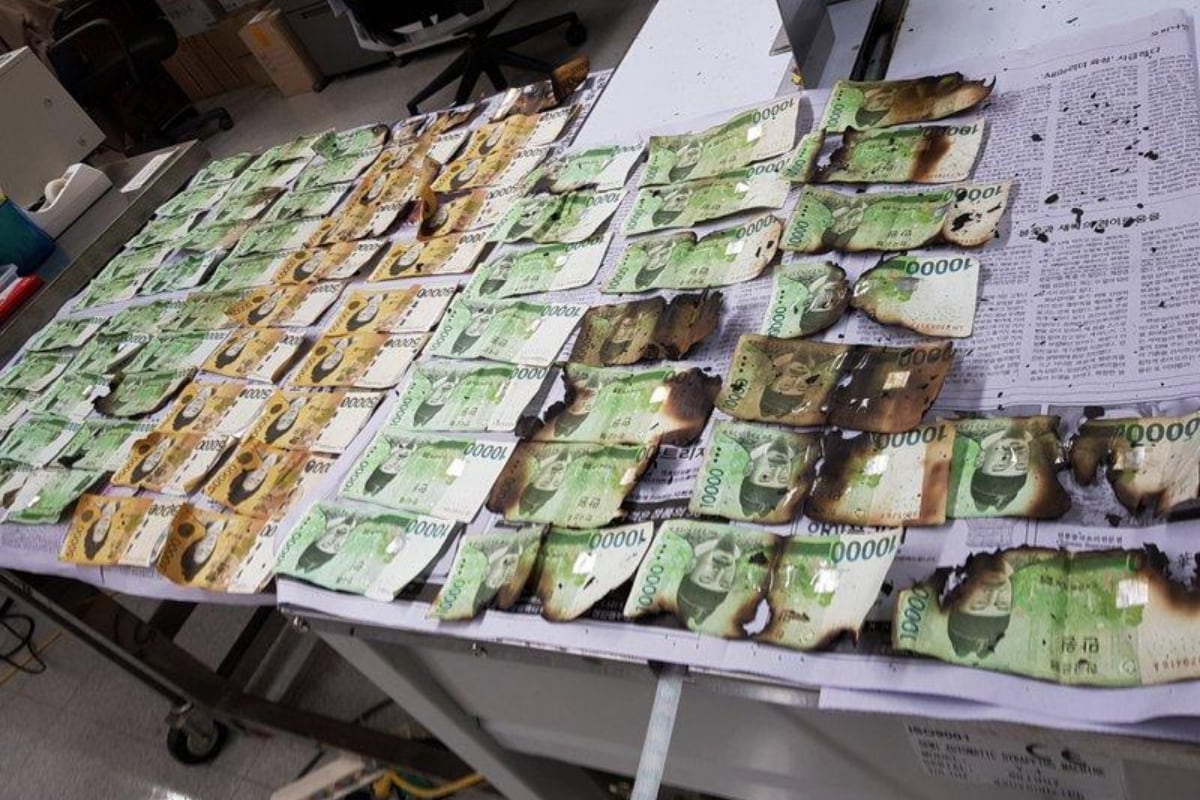 This undated photo provided by the Bank of Korea on Friday, July 31, 2020, shows damaged banknotes by being heated up in a microwave in South Korea. According to the bank, a person, surnamed Kim, put bills in a microwave over coronavirus concerns earlier this year. The bank exchanged Kim’s damaged money with the new currency worth 5.2 million won ($4,370) | Credit: AP

The person living in Ansan city, near Seoul, placed an unspecified amount of 50,000-won ($42) bills in a washing machine earlier this year.

Money laundering is not a good idea, as a South Korean found out when he or she put banknotes in a washing machine to remove possible traces of the coronavirus.

Officials say the loss was considerable.

The person living in Ansan city, near Seoul, placed an unspecified amount of 50,000-won ($42) bills in a washing machine earlier this year. Some of the money was seriously damaged, and the person reached out to the Bank of Korea to find whether it could be exchanged for new bills.

Under bank rules on the exchange of damaged, mutilated and contaminated banknotes, the person was provided with the new currency totaling about 23 million won ($19,320), the Bank of Korea said in a statement.

Bank official Seo Jee Woun said the number of 50,000-won bills the bank exchanged at half value was 507. She said the bank doesn’t count the number of bills that it cannot exchange because damage is too big.

She said bank officials didn’t know exactly how much money the person tried to wash.

She said the loss would still be “considerable.”

How much the central bank should exchange in a situation like this depends on how seriously banknotes are damaged. The bank can provide the new currency at face value if the damage is minimal, but at half value or not at all if the damage is significant.

The amount in question was condolence money given by relatives, friends, and others during a family funeral, according to the bank.

The person has been only identified by the family name Eom. Bank officials gave no further personal information citing privacy law.

How about microwaving money?

According to the bank, another person surnamed Kim, put bills in a microwave over similar coronavirus concerns earlier this year. The bank exchanged Kim’s damaged money with the new currency worth 5.2 million won ($4,370). Seo said Kim’s losses were not big.

South Korea’s central bank has advised the public to avoid putting banknotes in a microwave saying its disinfection effect is unclear. Anti-virus guidelines in South Korea don’t include sterilizing money in a washing machine either.