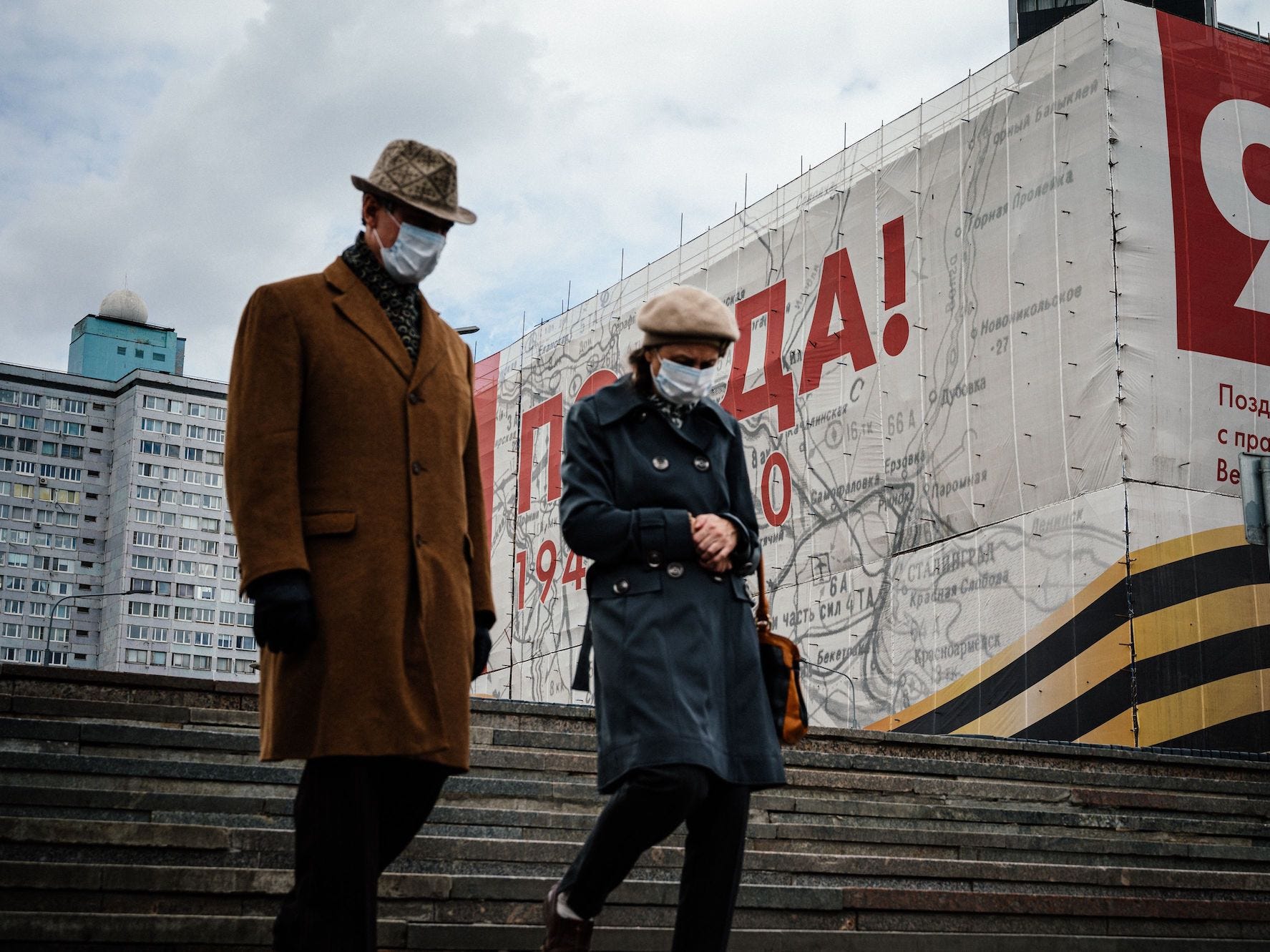 Russia is quickly becoming a new hotspot in the coronavirus pandemic, with more than 177,000 cases and 1,600 deaths.

Inside Russia, healthcare workers are complaining about a lack of protective equipment and censured for voicing suspicions that deaths are being underreported.

While Russia for a time appeared to escape a serious coronavirus outbreak, the situation there has changed drastically in past weeks.

On Thursday, the country reported its largest single-day increase in new cases — of 11,231 — passing Germany and France to become the fifth-most infected country in the world, according to The Moscow Times.

And yet, the government still appears to be dealing with the crisis chaotically. Health workers are still reporting a shortage on protective equipment, while President Vladimir Putin is already thinking of reopening the country.

Workers in protective gear bury coronavirus victims in the Leningrad region of Russia on May 6, 2020.

Questions about the numbers

It’s possible that Russia’s outbreak is even worse than what’s being reported. The official numbers on cases and deaths don’t seem to line up with coronavirus trends seen elsewhere.

Most countries show a much higher fatality rate than what’s being reported in Russia. France, which has reported around 174,000 cases as of Thursday — less than Russia — has recorded more than 25,000 deaths.

This has led to suspicions that the Russian government could be downplaying the true extent of its outbreak.

Last month, Anastasia Vasilieva, head of an independent doctors’ union, was detained after accusing the government of downplaying the official number of cases by misclassifying coronavirus cases as pneumonia, The New York Times reported.

There has been a sharp increase in coronavirus cases in recent weeks in Russia.

Doctors have been complaining about unsafe working conditions and a lack of personal protective equipment (PPE), causing some to go so far as to resign in protest.

Dmitry Seryogin, a Russian paramedic, told The Guardian on Tuesday that he and his colleagues weren’t putting on full protective gear unless a patient specified they had coronavirus, and that more than a dozen of his coworkers had now contracted the virus.

The Guardian also reported on the resignation of a doctor at a war-veterans hospital in St. Petersburg, who complained about a PPE shortage. The doctor, Marianna Zamyatina, said that before she quit her husband had given her a welder’s mask to stay safe at work.

The outbreak appears to have hit the country’s healthcare workers especially hard.

In one St. Petersburg hospital, 111 ambulance workers have been infected, according to The Guardian.

A website has even been set up to honor the Russian doctors who have died in the crisis. As of Thursday, this number has reached 113.

A St. Petersburg resident decorates a wall with flowers that was set up to honor the healthcare workers who died after contracting with the coronavirus.

“We’re seeing mass infections among medical workers,” Andrei Konoval, co-chairman of the independent medical workers’ union Deystviye, told The Guardian. “From everything we have seen, hospitals seem to be one of the key vectors for the spread of the disease.”

In recent weeks, three doctors have fallen from hospital windows in bizarre circumstances. Two of them died.

Natalya Lebedeva, a 48-year-old ambulance service manager, died on April 24 after falling from the fifth floor of a Moscow hospital where she was being treated for the coronavirus.

Her death came after she was blamed for failing to contain the virus locally by superiors, according to a colleague who spoke to The Independent.

A day later, 47-year-old Yelena Nepomnyashaya, the acting head doctor at a hospital in the Siberian city of Krasnoyarsk, died after falling out of a fifth-floor window of the health center. She was said to have been in conflict with local officials who wanted to turn her hospital into a coronavirus unit, even though it only had one respirator.

Workers erect a temporary coronavirus hospital in Moscow on May 7, 2020.

A week later, 37-year-old paramedic Alexander Shulepov fell from the first floor of the hospital where he was receiving treatment for the coronavirus and is now in the ICU for a fractured skull.

Ten days prior he had recorded a video in which he complained about being forced to work while sick with COVID-19. He was subsequently summoned by the police for spreading “fake news” and later apologized, saying he had posted it in “an emotional state.”

Dmitry Belyajov, chair of Russia’s independent ambulance workers union, told The Independent he had no reason to believe that the three incidents weren’t suicides or attempts caused by a desperate situation for health workers in the country.

“Managers don’t know what to do, so they have taken to scapegoating the middle-rung people,” he said. “Exhausted enough by the pandemic, they are throwing themselves out of windows.”

Meanwhile, President Vladimir Putin has been mostly out of the picture, palming off most coronavirus duties to regional leaders instead.

This could be because public health outbreaks aren’t really his area of expertise, and he worries that any missteps will make him look bad.

“Putin doesn’t have a gut feeling for this,” Konstantin Gaaze, a political analyst at the Carnegie Moscow Center, recently told Politico.

“He is OK with sharing some authority because he himself doesn’t know what is right and wrong in the current circumstances.”

In his rare appearances, Putin has given wildly different descriptions of the situation, from saying the country was having “a lot of problems” on April 14, to saying just five days later the situation was “under full control.”

The crisis has seen Putin’s approval rating drop to 59% in April, according to Reuters.

Russia’s President Vladimir Putin is seen in his office in the Novo-Ogaryovo residence as he chairs a government meeting via videoconference link to discuss measures aimed at supporting Russia’s economy and public services during the pandemic of the novel coronavirus disease on May 6, 2020.

Even as the country’s coronavirus outbreak appears to peak, Putin appears to be looking to reopen.

On Wednesday, he ordered regional governors to come up with plans to gradually lift lockdown measures, the Financial Times reported. He also endorsed a plan for industrial and construction companies to resume on May 12.

Moscow, the hardest-hit city, is extending its own lockdown through May 31, but with some restrictions being lifted on May 13 on certain businesses.

Putin, however, seems wary not to make any missteps.

“In some places, the tough, justified preventive measures need to stay in place and even be increased, and in some places, it is possible to plan a gradual softening,” he said, according to the FT. “But I am saying this again: we cannot jump ahead of ourselves. Any carelessness or haste may cause a setback.”

“The price of even the smallest mistake is the safety, lives and health of our people.”

Jamie Dornan’s father, a famend physician, dies of COVID-19 at 73

Faculties in Japan are again in session amid coronavirus pandemic