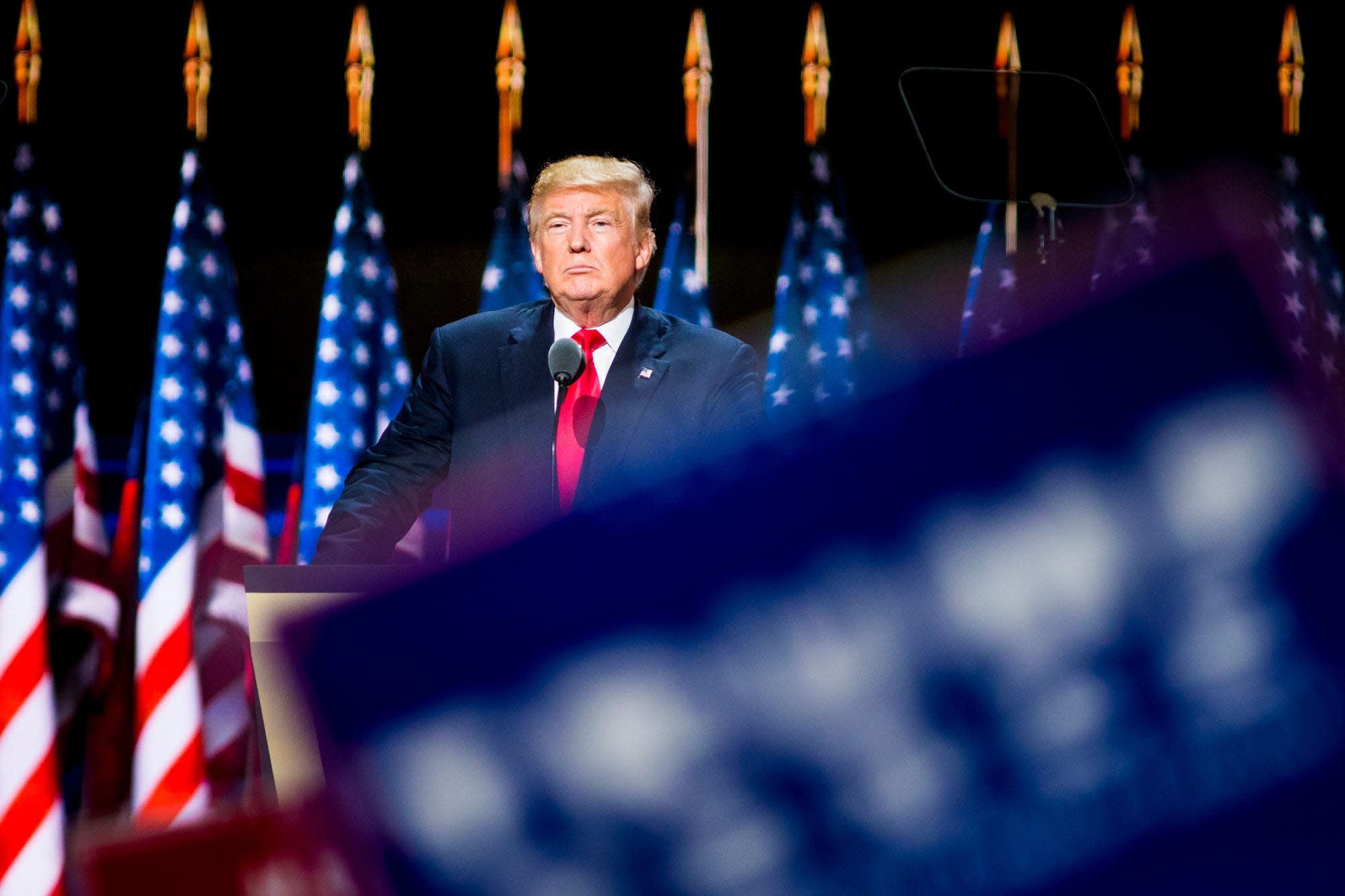 WASHINGTON – Republicans scrambling to organize a four-day  “celebration” in Florida in which President Donald Trump is set to accept the GOP presidential nomination face considerable uncertainty because of the coronavirus and may be forced to scale the festivities back to a single day, USA TODAY has learned.

The explosion of coronavirus cases in Florida – the state reported a sharp increase in COVID-19 deaths – and the later-than-usual selection of Jacksonville has cast doubt on the party’s ability to convene a major event there to rally supporters, five Republicans familiar with the planning said on condition of anonymity to discuss internal matters.

Republican officials announced last month that Trump would move the highest-profile speeches of the Republican National Convention to Jacksonville from Charlotte, North Carolina, after the state’s Democratic governor, Roy Cooper, imposed a shelter-in-place order that could have severely limited the large, made-for-television event Trump wanted.

That was before the virus surged in Florida, a state where more people have tested positive than all but eight nations.

Republican Gov. Ron DeSantis, a Trump ally, has since ordered the state’s large venues to limit capacity to 50%, and the city of Jacksonville requires face masks to be worn indoors. Republican officials plan to move several events out of the city’s VyStar Veterans Memorial Arena to outdoor spaces.

‘Republicans are really fed up’: GOP splits with Trump as his polls drag

That sense of caution has ballooned despite Trump’s desire to project a back-to-normal image with a glitzy, star-studded convention that could help reset the presidential race. Polls indicate presumptive Democratic nominee Joe Biden leads in battleground states that Trump won narrowly in 2016, such as Michigan and Pennsylvania.

Initially, planners considered a three-day event in Jacksonville. According to a letter sent to delegates Thursday by Republican National Committee chair Ronna McDaniel, the party is now contemplating four days in Florida, Aug. 24-27, with events in multiple venues, including some outdoors, in a multi-block footprint.

Trump’s acceptance speech is still scheduled to take place in the arena. McDaniel said the RNC will also use a nearby amphitheater, TIAA Bank Field, home of the NFL’s Jacksonville Jaguars, and 121 Financial Ballpark, the city’s minor league baseball stadium.

Donald Trump, Republican presidential nominee, speaks on the final night of the Republican National Convention at Quicken Loans Arena in Cleveland on July 21, 2016.

“When we made these changes, we had hoped to be able to plan a traditional convention celebration to which we are all accustomed,” McDaniel wrote. “However, adjustments must be made to comply with state and local health guidelines.”

A large convention would offer Trump a chance to unify an increasingly frayed party.

Republicans have had teams of planners working on Charlotte and Jacksonville events for weeks. GOP members familiar with the project said they remain hopeful they can produce a full-scale series of convention events but acknowledged it might not be possible because of COVID-19.

Trump, Vice President Mike Pence and other officials close to the president signaled the possibility of scaled-down events. After asserting in April that Republicans had “no contingency plan” if a traditional convention fizzled, those officials have taken to using the word “flexible” to describe their thinking.

Wednesday, Pence described the event as “a work in progress.”

Trump will probably accept the nomination with some kind of an address, officials stressed, but the idea of a multiday event in Jacksonville with hours of speeches and entertainment – the kind of raucous display that for years has characterized presidential nominating conventions for both parties – appeared increasingly unlikely.

Democrats planning to nominate Biden next month scaled back their convention and plan to conduct most of the party’s official business virtually.

Republican Party and White House officials said planning for a major event in Jacksonville continues in earnest. City officials, including the president of the City Council, a Democrat, said national party officials are furiously moving ahead with logistics for a full-scale event.

“With unprecedented challenges, our teams have been working tirelessly to achieve this goal, and we know that when we gather in Jacksonville, the events we hold will showcase what is great about our country and why President Trump deserves to be reelected,” he said.

Under the plan, party officials will hold a series of meetings in Charlotte because the RNC is contractually obligated to do so after it initially chose that city for its convention. Because of coronavirus restrictions, only 336 of 2,550 delegates will meet in Charlotte to adopt rules, approve a platform and formally nominate Trump and Pence.

Then delegates would travel to Jacksonville for events in late August. That could include the kind of prime-time speeches by Pence, the first lady and the president that tend to drive live network news coverage – bringing the convention into the homes of millions of voters.

There have been signs of turmoil, some of them spilling out into public view.

A month out, some top Republicans said they will skip the event. Sen. Chuck Grassley, R-Iowa, 86, the oldest Republican senator, said he would avoid the convention “because of the virus situation.” Senate Majority Leader Mitch McConnell, R-Ky., 78, declined to say whether he would attend.

Bagging it: Several Republicans say they will not attend GOP convention in Florida

Two Republicans speaking on the condition of anonymity to freely discuss internal matters cited another potential roadblock: fundraising. Throwing an event of the magnitude envisioned costs tens of millions of dollars. Some donors, the Republicans said, have been skittish, given the spread of the disease.

“There is still time for fundraising and logistics to be successful,” one Republican said. “But without question, it will be challenging and stressful for all involved, especially depending on what the COVID numbers look like closer to the convention.”

Jacksonville Mayor Lenny Curry, a former state Republican Party chairman, pushed for the convention. It’s not clear how his order requiring masks would affect it; Trump has mostly eschewed face coverings, noting they are not required by federal guidance.

DeSantis declined to say whether he will lift the rule requiring indoor venues remain under 50% capacity – which could deny Trump the large, cheering audience so central to the staging of a national convention.

“There’s plenty of questions – no answers,” said Tommy Hazouri, Democratic president of the Jacksonville City Council and a former mayor of the city who is pressing officials for logistical details. “Right now, everything’s up in the air.”

It’s not only lawmakers who have reservations about traveling – potentially to two different cities – during a pandemic. Particularly after Trump’s rally in Tulsa, Oklahoma, which local health officials said may have resulted in an increase in cases, party volunteers and delegates who make up the bulk of any convention face a dilemma.

Oklahoma Gov. Kevin Stitt said Wednesday he tested positive for coronavirus weeks after attending Trump’s rally, though he said the two were not related. Trump’s campaign canceled a rally scheduled in New Hampshire July 11, citing a tropical storm that never materialized where he was set to speak.

Juliana Bergeron is among the RNC committee members who normally would flock to a presidential convention. But Bergeron plans to skip the festivities in Jacksonville this year and is closely eyeing the COVID-19 situation in Charlotte before making a decision about whether to attend the formal meetings.

“There’s enough germs going around in this country. I don’t need to bring any new ones home,” said Bergeron, 67, a financial adviser from New Hampshire. “I just really don’t feel like being in a crowd that large at this point in time.”

Others said they are undaunted by the threat of coronavirus and are excited to nominate Trump for a second term.

“I’ll be there with bells on,” said Beth Campbell, an RNC committeewoman from Tennessee.

Campbell, a senior citizen who would not disclose her age, expects to travel to both Charlotte and Jacksonville, where she has faith party officials will take the precautions needed to keep the convention safe.

“They’re looking at every way to keep it as safe as possible,” she said, “so I have utmost confidence that this will be done.”

Robin Armstrong, an RNC committeeman from Texas, is a physician in the Houston area who has been treating patients with coronavirus. He said he has concerns about the spike in cases but believes the convention can be held safely.

If guidelines are followed, he said, “we will be OK.”

That raises another potential concern: the idea of spending a lot of time outdoors in the middle of the summer in Florida.

“I’ll tell you: Outdoors would be very hot,” said Armstrong, 51, who plans to make his fourth convention trip. “I think you would have a lot of folks having second thoughts if it were outdoors”

This article originally appeared on USA TODAY: Trump’s convention in Jacksonville may be pared down due to coronavirus