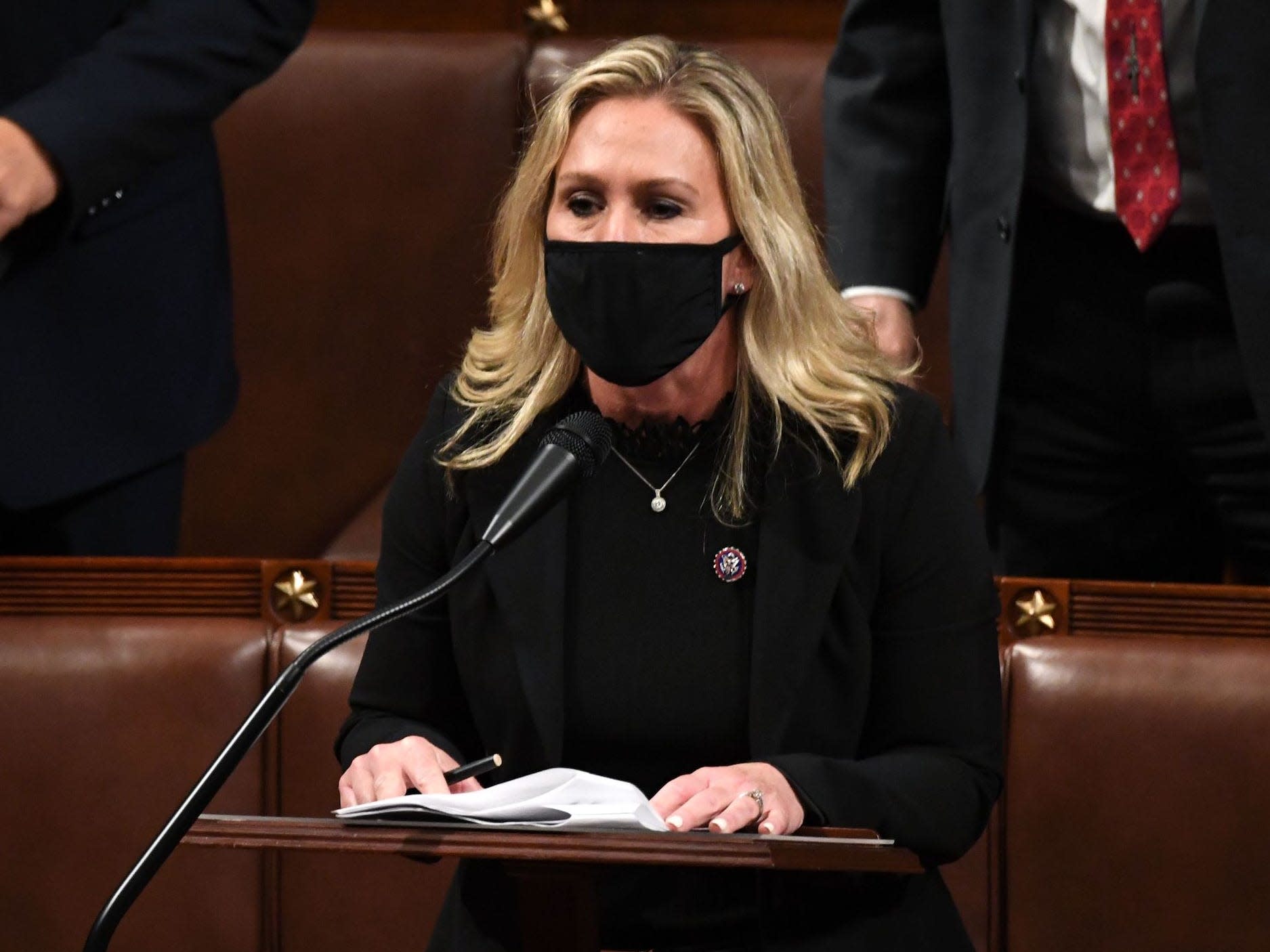 Rep. Marjorie Taylor Greene (R-GA) reads an objection on January 7, 2021 to the counting of the certificate of vote from the state of Michigan during a joint session of Congress after the session resumed following protests at the US Capitol in Washington, DC. SAUL LOEB/AFP via Getty Images

Republicans are frustrated with Greene’s machinations and 41 GOP lawmakers voted against her motion.

The Georgia Republican called for a motion to adjourn the House just as the chamber prepared to begin debate on the COVID-19 bill. The move forced every Congress member to cast a vote to keep the House in session, a lengthy process that pushed back the scheduled vote on the stimulus legislation.

“I just made a motion to adjourn to stop Congress from passing the $1.9 trillion dollar massive woke progressive Democrat wish list,” Greene tweeted. “The GOP has messaged against this ridiculous bill. We should do everything to stop it. Pay attention if Rs vote to adjourn. Or with the Dems.”

Democrats and many Republicans, however, are fed up with Greene’s disruptions. Her motion was unsuccessful and struck down in a 149-235 vote, with 41 GOP members voting against it.

“Unfortunately some Republicans are voting with Democrats to continue business as usual,” Greene tweeted after the vote.

The freshman firebrand has halted the day’s work on several occasions since she was stripped from her committee assignments last month. House Democrats removed Greene from the Education and Labor Committee and the Budget Committee to rebuke her past social media activity peddling in controversial and racist comments as well as her support for conspiracy theories and political violence.

Greene has sought to strike back at Democrats and exercise her limited power in any way she can, such as forcing votes to adjourn the House. But Republicans are growing increasingly frustrated with her ongoing scheme.

“It’s a pain in the a–,” Republican Rep. Fred Upton of Michigan told CNN.

Democrats, who are in the majority, are considering ways to prevent Greene from continuing her interference. Rep. David Cicilline of Rhode Island told reporters on Wednesday that he may propose a rule to bar lawmakers not on committees from calling motions to adjourn.

“It’s unconscionable that they are doing everything they can to try to, again, delay getting aid to the people, including their constituents who are in desperate need,” Democratic Rep. Jim McGovern of Massachusetts told Reuters’ Susan Cornwell on Wednesday.

The House is likely to pass the massive economic relief package on Wednesday, sending the bill over to Biden’s desk for his signature. So far it’s unclear whether any Republicans, who claim to have been shut out of the negotiating process, will support the legislation, which includes $1,400 direct payments to Americans, extended unemployment benefits, vaccine funding, and other measures.