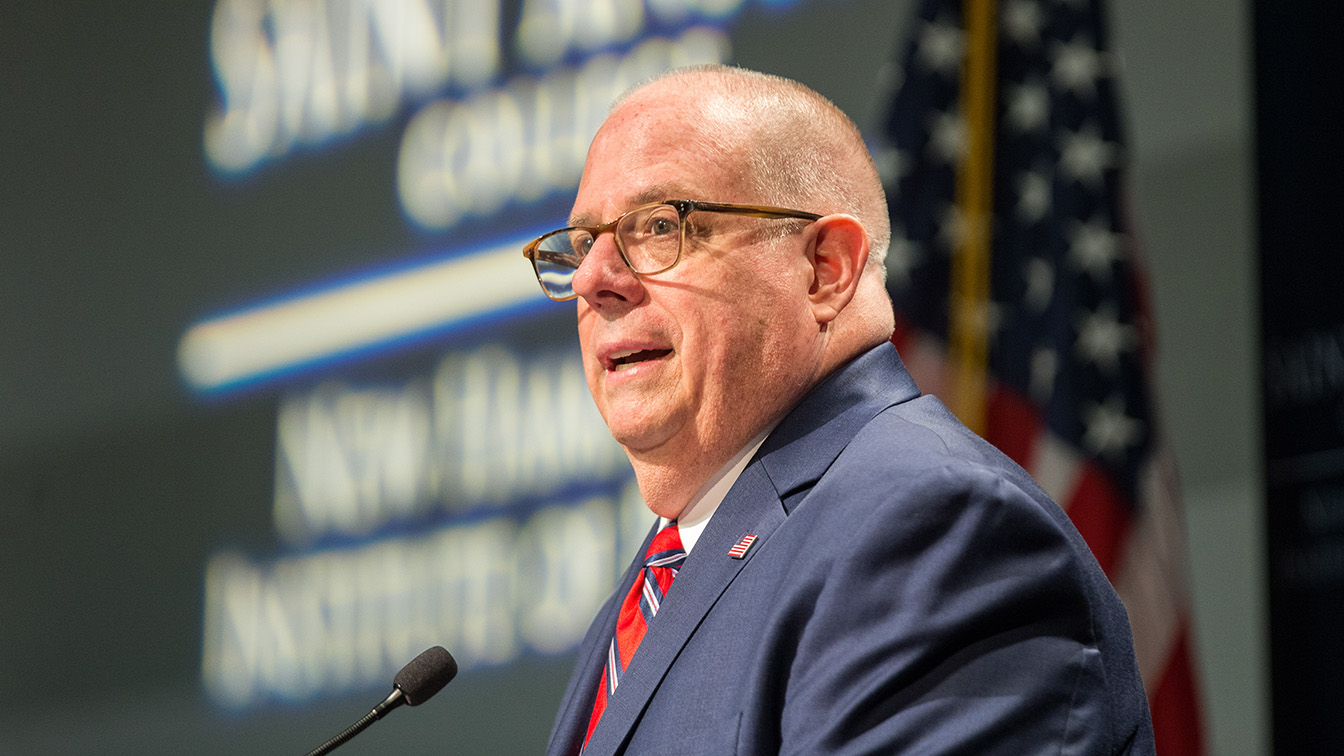 WASHINGTON — As the coronavirus was spreading throughout the United States last spring, Gov. Larry Hogan of Maryland emerged as a refreshingly sensible leader willing to put political ideology aside for the sake of public safety.

Even as other Republicans rushed to reopen their states to cater to an impatient President Trump, Hogan vowed to stick to his cautious approach. “We’re not going to do anything that’s going to put anybody in more danger,” he said in a television appearance at that time.

But last month, Hogan moved abruptly to reopen the state at a time when public health officials were continuing to plead for caution. They have pointed to the spread of the B.1.1.7 variant of the coronavirus, which is more transmissible than the wild type, or original strain.

Hogan rejected that expertise when he announced, on March 9, that businesses like restaurants could open to full capacity, while large venues could get to half full. “Every day in the pandemic, you’ll find some experts who are for what you’re doing, some who are against,” his spokesman said at the time.

Since then, the predictable has happened, with case counts rising in the parts of the state that followed the governor’s lead even as they remain flat in those parts of Maryland that kept their restrictions past March 12, the day the order took effect. As states reopen throughout the spring and summer, they could encounter the same challenges that Maryland has, especially since the state’s surprising demographic and geographic variety could apply in many other parts of the country.

Unlike other Republican governors, Hogan kept the statewide mask mandate in place. Even as he is attracting new criticism, he continues to garner praise as well. The University of California at Berkeley’s Othering and Belonging Institute recently found the state to have been among the most effective in handling the pandemic throughout 2020.

The most recent numbers, however, are not encouraging. On March 1, there were 904 hospitalizations for COVID-19; by the end of last week, the number of people hospitalized across the state for coronavirus-related illness had risen to 1,470.

The daily share of diagnostic tests coming back positive had fallen to 2.64 percent in the days before Maryland reopened, according to the state’s coronavirus dashboard; early April saw the positivity rate jump to 8.73 percent, a clear warning that the virus was spreading more rapidly again (it has gone down slightly since then).

Criticism followed, with the Washington Post editorial page calling Hogan’s reopening “premature” and suggesting that the governor was “in denial.” It’s not exactly what a politician who is likely preparing a 2024 run for the White House wants to hear.

“I understand the need for businesses, schools, churches and all aspects of our society to reopen,” said Dr. Leana Wen, the former Baltimore health commissioner. “Continuing mask mandates is also really important. I just wish that there was more thought to tying reopening policy to vaccination, especially since we are in a race between vaccines and a fourth surge of the virus.”

If such a wave materializes, it is likely to be less deadly than previous ones because so many people either have been vaccinated or have antibodies from their own bouts with COVID-19. Still, there are enough vulnerable and unvaccinated people that any new spike would cause concern. Also worrisome is that the coronavirus appears to have alighted on a new population. “We’re finding that younger people are getting ill,” Maryland’s acting Secretary of Health Dennis Schrader said late last month.

“Hogan’s reopening plan leaves many holes and questions unanswered,” said Dr. Kavita Patel, a Maryland-based health policy fellow at the Brookings Institution and a former Obama administration official, “particularly as cases go up in parts of the state and vaccination rates still lag behind.”

Vaccination is the best rationale for reopening, but no state has vaccinated enough people to stop community transmission. Maryland has vaccinated 24 percent of its population, just slightly above the national average of 21.7 percent. But white Marylanders are getting vaccinated much more quickly than Marylanders of color. According to the Kaiser Family Foundation, African Americans represent 30 percent of Maryland’s population and 35 percent of its coronavirus deaths, but have received only 23 percent of inoculations administered in the state.

“In no way is Maryland ‘lagging’ in vaccinations,” Michael Ricci, a spokesman for Hogan, told Yahoo News. “I strongly dispute that. Maryland outpaces the national average, in both 1st dose and fully vaccinated categories.”

The reopening was especially striking because it came without much preparation or warning, a deviation from Hogan’s otherwise thought-out approach to the pandemic. “Reopening must be done in the right way — and that includes ensuring our health experts are driving the decision, we are prioritizing reopening schools and childcare options, and we are keeping our local governments in the loop,” said Brooke Lierman, a Democrat who represents Baltimore in the state legislature and is now running to be the state’s comptroller.

Ricci, the governor’s spokesman, said the rise in cases was due to more transmissible variants spreading across much of the Northeast, not just Maryland. “Next to vaccines, the most critical mitigation tools we have to fight the pandemic are masking and distancing, which Maryland has kept in place. In fact, Maryland is #1 in the nation in mask compliance,” Ricci told Yahoo News in an email.

Meanwhile, Hogan has continued to defend reopening. “We meet almost every day with our team of experts and epidemiologists, and we’re following the science,” he said at a press conference last week. “We don’t think it had anything to do with reopenings.”

Democrats in the state argue that Hogan’s political ambitions have gotten in the way of his common sense. They say he’s spent months watching as Fox News and other right-leaning outlets celebrate Greg Abbott of Texas, Kristi Noem of South Dakota and Ron DeSantis of Florida, all Republican governors who defied public health advice and reopened earlier than recommended.

That defiance has been part of their growing appeal to Trump fans. All three are expected to seek the White House in 2024. So is Hogan, a much more moderate figure in the party, who happens to be more popular with Democrats than Republicans in Maryland. That isn’t likely to help in a Republican primary, especially one dominated by pro-Trump voters.

“Larry Hogan has shown his priorities are his political ambitions and not the people of Maryland,” Yvette Lewis, head of the state’s Democratic Party, told Yahoo News, describing Hogan’s supposed desire to best DeSantis and Noem as a “race to the bottom.”

Lewis also charged that Hogan’s much-touted purchase of coronavirus tests from South Korea last spring, when such tests were hard to come by in the United States, was a “massive publicity stunt.” He did so with the help of his wife, Yumi, an artist who hails from that country. The couple even showed up at the airport to protect the shipment, fearing that Trump might order it to be seized.

A recent state audit found that the tests were improperly purchased and were, in some cases, potentially faulty. And two state employees are alleging they were fired for raising concerns about the South Korean tests.

Hogan holds a press conference, along with his wife, Yumi, after receiving COVID-19 test kits from South Korea in April 2020. (Steve Kwak/Office of the Governor via Flickr)

That audit came on the last day of March, as cases were rising in many parts of the state. It fueled growing suspicion from Democrats who have always regarded Hogan with a measure of wariness, despite the broad mandate that voters seemed to give him. The national image Hogan has been cultivating is not an accurate one, they say, when it came to his handling of the pandemic.

At the opening of a mass vaccination site last Wednesday, Greenbelt Mayor Colin A. Byrd took his turn at the microphone to offer unexpected criticism of Hogan. “I want to let you know, Mr. Governor, very respectfully, that you have reopened the state, in my mind, far too quickly,” Byrd said, with Hogan standing just feet away.

A staffer for the governor then tried to cut Byrd off, a move that instantly (and unsurprisingly) made the moment even more newsworthy than it might have otherwise been.

Byrd’s frustration is reflected across more populous parts of the state, in particular near the suburban Washington counties of Montgomery and Prince George’s and in Baltimore. These are also the communities with the greatest share of Black and Latino residents, as well as essential workers like grocery store employees.

While other parts of the state reopened in March, Montgomery and Prince George’s remained more restrictive, in keeping with the District of Columbia’s own caution. Baltimore County moved forward in step with Hogan, while Baltimore City did not.

“As the hardest-hit jurisdiction in the state, it has been important to take a more cautious and measured approach to reopening businesses and other establishments in our community to not only keep our residents safe, but also to ensure we do not experience any setbacks in our recovery,” said Dr. George Askew, a Prince George’s County deputy health administrator, in a statement to Yahoo News.

Prince George’s has had the most infections (80,257) in the state and has had the second-highest death rate (1,408) after Montgomery County. “Throughout this pandemic, we have relied on data, science and the advice of our public health officials to make decisions regarding reopening,” Askew went on to say. “While this has often meant that our reopening was slower than most of the State, our residents have trusted our decisions and data-driven approach.”

At the same time, rural parts of Maryland — both in the mountains along the West Virginia border and, on the opposite side of the state, along the Chesapeake Bay — had had few infections or deaths. Those areas tend to be whiter and more conservative. There have been 41 deaths in Queen Anne’s County, on the scenic Eastern Shore; Garrett County, with its forests and mountains, has had only 62.

Similar battles have played out across the country, putting governors of both parties in difficult positions. In California, for example, remote counties in the Redwood Empire have pushed to reopen, but reopening would make little sense for East Los Angeles, where many essential workers live, often in multigenerational households. People travel, and the residents of one county may depend on goods and services coming from another. All that makes a coherent state-level response both necessary and nearly impossible, even in small states like Maryland and Rhode Island.

But just as younger people have been getting infected more frequently, those infections are also showing up in counties that had previously been relatively spared by the coronavirus, and thus saw little reason not to follow Hogan’s lead on March 10. Cases are up in many parts of the Eastern Shore, including Kent County (629 percent), Talbot County (157 percent), Dorchester County, (138 percent) and Queen Anne’s County (79 percent), according to the New York Times coronavirus tracker. Allegany County, on the border with Pennsylvania and West Virginia, saw its cases rise by 71 percent since the end of March.

The counties near Washington, D.C., that stayed closed have done much better, with cases rising by only 5 percent in Prince George’s and actually falling by five percent in Montgomery.

Charles Gischlar, a spokesperson for the Maryland health department, said that the “state is aware” of the case increases. “We are in a race between the emerging variants and getting shots into arms,” he added.

The question, at least for Hogan’s critics, is whether reopening too quickly ended up slowing Maryland in that race.