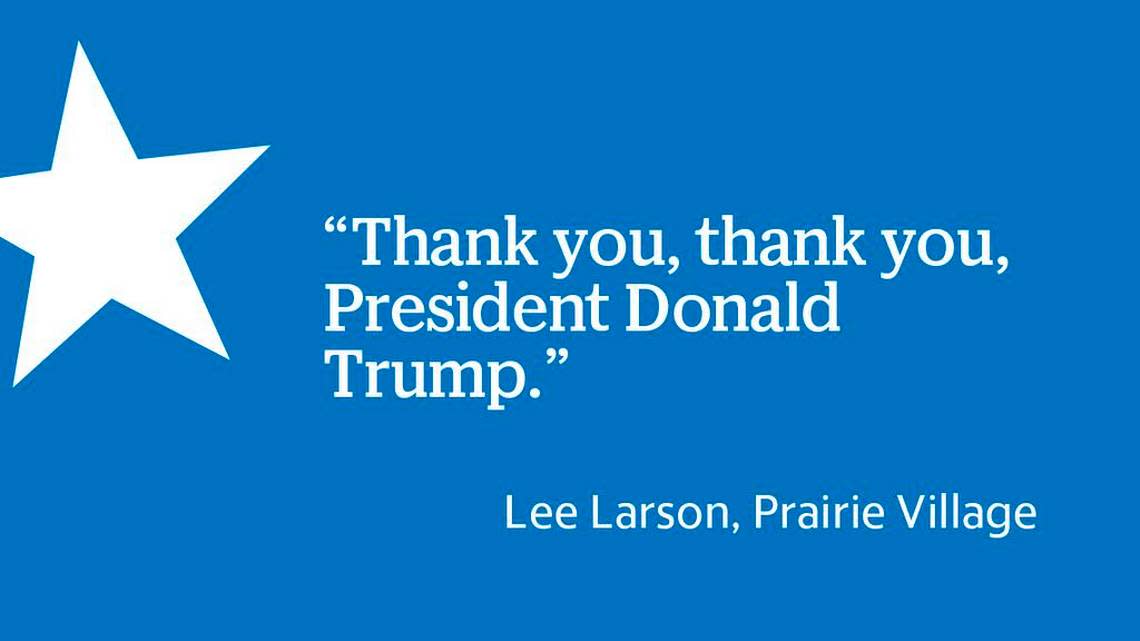 As a nation, we are doing great combating COVID-19. Deaths and hospitalizations are down. About 30% of the country has been vaccinated. Three vaccines have been developed and are plentiful.

Thousands, perhaps millions, of lives have been saved. Life as we once knew it is slowly returning to near normal. As a nation, we should be thankful. It is time to thank the president for the great job he has done. Thank you, thank you, President Donald Trump.

Republican Missouri state Rep. Hannah Kelly has proposed legislation that would require a woman receiving an abortion to pay for cremation or a burial for the fetal remains as a “way to honor the life of the child.” (April 28, 8A, “Bill would force painful ritual on women who abort”) She does not mention whether she or any other abortion rights opponents would attend these burials or cremations.

I suggest adding wording to the bill that lawmakers who vote to pass this legislation be required to attend these services they would be mandating, at least once a month until their public service ends. If inconvenient, they must find other elected officials to attend in their places.

I find it ironic that Sen. Roger Marshall seeks to cast blame on Washington, D.C., and bureaucrats for vaccine hesitancy and the spread of disinformation. (April 26, 7A, “Misinformation and flip-flopping from federal bureaucrats causing vaccine hesitancy”) In fact, it was the former administration that caused so much confusion and chaos in establishing coronavirus prevention measures.

The politicization of mask-wearing, denial of the threat posed by this virus and denigration of science and infectious disease experts contributed to the high death toll and patchwork approach to combating virus spread.

Yes, we are a free country with the right to make individual decisions, and I do not think anyone should be shamed for refusing to get vaccinated. However, pitting one constituency against another only exacerbates the issue. We are better served to spend our time and energy healing the divide and working together to stop the spread.

I expect better representation for Kansas. This is not it.

I know everyone is tired of this pandemic, but this virus still has us in its grip. Last week, my family attended a graduation ceremony at the Overland Park Convention Center.

Precautions were taken to provide a safe environment. The venue is large enough to seat people at a distance. Masks and sanitizer were provided, and temperatures were taken at the door. The graduates were masked, although a few wore masks pulled under their noses (and these are medical professionals).

During the ceremony, I was dismayed to see that at least a third of the audience members were not masked, including many younger adults who recently have been offered the chance to be vaccinated.

It’s the same old story: People care more about their “rights” and comfort than the health and safety of others. This is an ongoing controversy in our city councils, county meetings and state legislatures. Why?

Faculty Professors Made Fashions Exhibiting How Dangerous COVID-19 Would Be on Campus. Some Directors Ignored Them