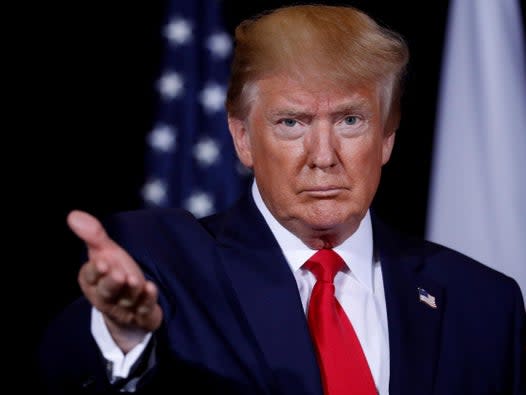 The president championed reports that 4.8m jobs were added in June as states started reopening their economies and people went back to work, with unemployment falling to 11.1 per cent, still higher than at the peak of the recession in 2008.

Mr Trump insisted his administration “put the flame out” in its handling of the coronavirus pandemic, despite new cases of Covid-19 shooting up by nearly 50,000 in the US on Wednesday, the biggest one-day increase since the virus reached its shores as states put the brakes on reopening.

His political ally Herman Cain has been hospitalised for the coronavirus in Atlanta, Georgia after attending the president’s campaign rally in Tulsa, Oklahoma on 20 June, though Mr Cain’s team said it was not certain when he contracted the virus.

Several states have recorded their highest single-day reports of new Covid-19 cases in recent days, including Florida, which saw a Thursday total eclipsing 10,000.

In Texas, Governor Greg Abbott ordered residents to wear face coverings in public as the state reported more than 8,000 new cases on Wednesday, it’s largest spike since the onset of the outbreak.

Arizona also has mandated face coverings in the state after it reported nearly 4,000 cases this week, it’s largest single-day spike yet.

As the president prepares for his Fourth of July event at Mt Rushmore, where social distancing and mask-wearing won’t be enforced, he reversed his public position on wearing face coverings, saying he’s “all for” them despite dismissing federal guidance urging Americans to do so since it was announced in early April.

The president of the Oglala Sioux tribal council was warned against Mr Trump holding the event in South Dakota on Friday over health fears among Native communities. He said the event would serve as an insult to Native people on whose land the Black Hills monument stands.

Please allow a moment for our liveblog to load

Herman Cain who attended Tulsa rally in hospital with coronavirus

‘I’m all for masks’ says Trump in abrupt U-turn