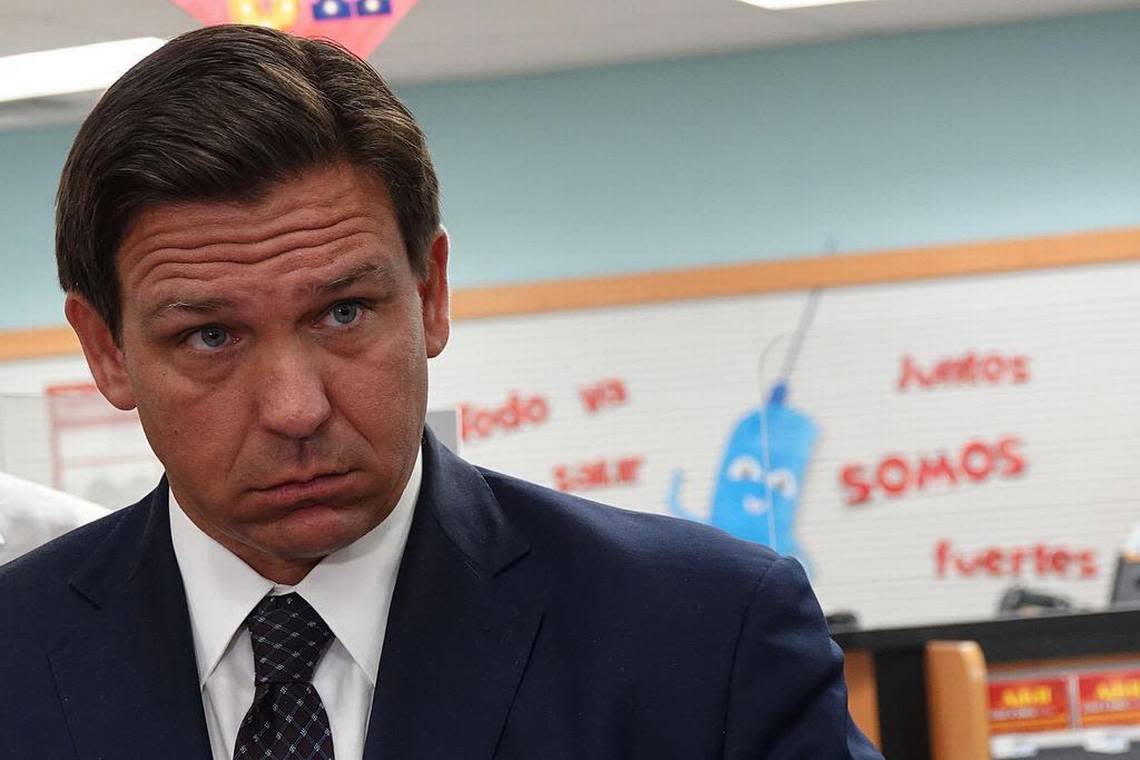 A California psychiatrist who has advised Gov. Ron DeSantis on the coronavirus pandemic recently promoted a drug for COVID-19 patients that federal disease experts have strongly warned against after a spike in calls to poison control centers.

The surge of interest in the parasite drug, ivermectin, prompted the Centers for Disease Control and Prevention on Thursday to issue a national alert advising against its use to treat coronavirus. The maker of the drug, Merck, has also said there is “no scientific basis” to claim that ivermectin is effective against COVID-19.

Dr. Mark McDonald of Los Angeles is among a fringe group of outspoken medical professionals who have pushed ivermectin as an alternative to widespread vaccination against coronavirus. McDonald called ivermectin an “effective, safe, inexpensive treatment” in a Aug. 5 Twitter post, and he shared an article by the Jerusalem Post citing a recent study of the drug in Israel.

A wave of online misinformation about ivermectin has led to increased demand, and some people have turned to a version of the drug meant for farm animals. That sparked the U.S. Food and Drug Administration to tweet: “You are not a horse. You are not a cow. Seriously, y’all. Stop it.”

Florida’s Poison Control Center, a state-funded non-profit, has treated 27 ivermectin-related cases in August, with most involving drugs made for livestock. That’s more cases tied to the drug than the center saw in all of last year.

McDonald called people who think ivermectin is a drug for horses “ignoramuses” in a tweet posted Monday. (The drug can treat parasites in both humans and animals like horses.)

In a phone interview, McDonald made clear Friday that people “should not get (ivermectin) from a feed lot.” But he said people are ingesting livestock medicine out of desperation because the federal government was preventing doctors from making the drug available.

McDonald accused the Food and Drug Administration of sidelining ivermectin because it already has spent billions of dollars to “mass vaccinate the population.”

“If the goal of these people is to advance public health and make the public well, why have none of them spoke a single word about prevention and making one healthy to prevent an infection or hospitalization or death?” McDonald said. “I think there is a lot of dishonesty here and cancellation of people who support truth.”

Dr. John Sinnott, the chairman of internal medicine at University of South Florida’s Morsani College of Medicine and an epidemiologist at Tampa General Hospital, said it was “evil” for people to promote ivermectin as a COVID-19 treatment “because it detracts from appropriate care.”

”Any physician who espouses this should be reported to their state medical association,” Sinnott added.

McDonald was one of several doctors summoned by DeSantis for a July closed-door discussion on mask policies in schools. In his comments, he argued that “masking children is child abuse,” according to video of the meeting later released by the governor’s office. He also likened mask mandates to apartheid, South Africa’s racist system of segregation during the 20th century.

At this week’s trial in Tallahassee over the governor’s ban on school mask mandates, attorneys for the state included McDonald’s comments as evidence. But in his ruling against DeSantis on Friday, Leon County Circuit Judge John Cooper was dismissive of McDonald’s opinion.

McDonald is one of several medical professionals from outside the state’s network of public health experts who DeSantis has leaned on for guidance throughout the pandemic. DeSantis has also regularly turned to Dr. Scott Atlas, a Stanford neuroradiologist favored by former President Donald Trump. Atlas reportedly clashed with other White House coronavirus task force members last year for urging Trump to let the virus run its course without government interventions.

And at the mask trial, Florida attorneys called on Stanford University professor Dr. Jay Bhattacharya to defend DeSantis’ order — not state Surgeon General Scott Rivkees. Bhattacharya, an early opponent of business restrictions aimed at curbing the virus’ spread, testified he has been an “informal advisor” to the governor since last September.

In a Friday statement to the Times/Herald, DeSantis spokeswoman Christina Pushaw said McDonald’s inclusion on the school mask panel “does not imply that Governor DeSantis endorses (or opposes) any of Dr. McDonald’s opinions on other subjects.”

“The panel was not about ivermectin,” she said. “It was about forced masking of schoolchildren.”

McDonald has a history of comments that defy the consensus of the greater medical and public healthy community. He shared on social media a graphic that called people who wear masks “retarded,” and he has posted comments skeptical of vaccines.

On Friday, NBC News reported that America’s Frontline Doctors is one of the leading purveyors of ivermectin as a false cure. The organization has built a business around prescribing the drug, the network reported.

Prescriptions for ivermectin jumped to 88,000 in the week ending August 13, up from just a few thousand a week prior to the pandemic and a four-fold increase since July, the CDC said. Meanwhile, ivermectin-related calls to poison control centers are up 400 percent, the agency said.

Dr. Asim Tarabar, an assistant professor of emergency medicine at the Yale School of Medicine and a medical toxicologist, said the poison control figures likely underestimate the problem because many who are taking ivermectin may be experiencing no side effects. Or, they are getting sick from the medicine, but they’re reluctant to pick up the phone, he said.

Ivermectin has been successfully used in developing countries to treat parasites for decades. In the United States, it is approved by the U.S. Food and Drug Association as an oral drug against roundworm and a topical treatment for lice, among other uses. It’s side effects are minor when used correctly, but overdoses can lead to vomiting, confusion, seizures and death, the Centers for Disease Control and Prevention said.

Studies have not demonstrated that ivermectin is effective in treating coronavirus patients and the Centers for Disease Control and Prevention has advised against off-label use. The National Institutes of Health said in February that clinical studies on ivermectin have varied, with some suggesting some benefits while others showed little or worsening change in patients.

Tarabar said some people’s trust in ivermectin could be explained by a misunderstanding of the scientific process. The drug has been shown in some studies to limit the virus’ ability to reproduce in a laboratory setting, the physician said. But there’s no proof the medicine works that way in the human body.

“Regardless what we believe — left, right, center — scientific rigor has to be followed,” Tarabar said.