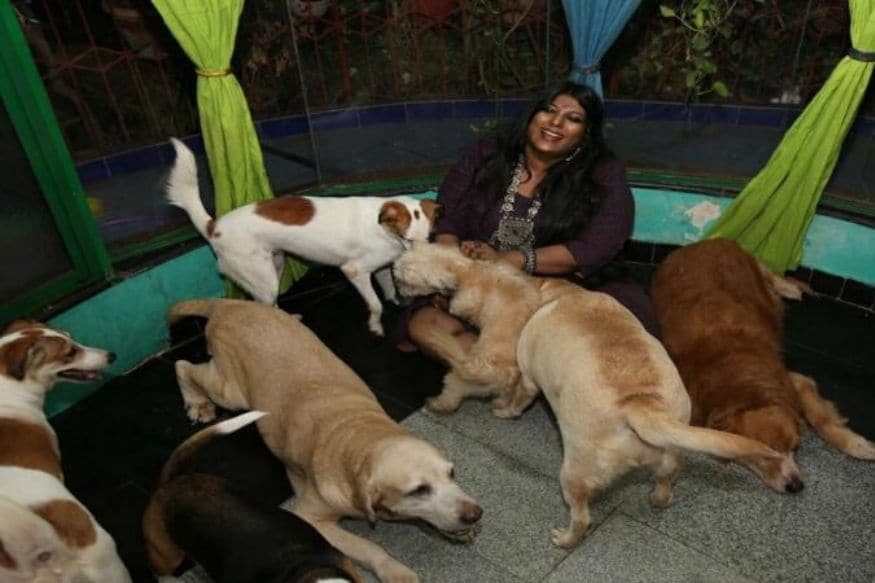 When locked down Indians took to abandoning their companion animals on the streets, one home opened its heart and doors for the hungry, scared and depressed animals.

Pawsitive Farm Sanctuary in Andheri, Mumbai took in abandoned pets who once believed that the home that had taken them in was their own. With no inkling that they had been cast off to survive the harsh streets amidst stray packs, they were left alone to starve and face imminent death.

Abandonment is not a new issue for Pawsitive Farm Sanctuary, the home of egalitarian earth warriors Anusha Srinivasan Iyer, Siddhant Gill, Vedant Gill, and Krishnaveni Srinivasan; it houses more than 114 rescue cats and dogs that have found solace, security and contentment in living with their ilk.

“The lockdown has brought with it immense fear, not to mention poverty and depression amongst people. We have been taking in the new age ‘stray pedigree pets’. People used to earlier leave them at our bungalow gate, but now the harsh streets are witnessing the pained animals that do not understand why they have been abandoned,” says Anusha Srinivasan Iyer, who has taken in the voiceless without any qualms.

This little orphanage is where people anonymously or on request drop kittens, puppies, senior dogs, endangered turtles, fish and even the odd family of 22 white mice.

“But COVID has given way to the insensitive and the cruel. Our staff is searching every night for her black stray Rocky whom her husband one day took and abandoned someplace and keeps misdirecting her about the location,” reveals Siddhant.

“Some thrash their pets and throw them, others maim them, yet others poison them before abandoning them. It is a very painful feeling,” adds Vedant. Studies have shown that domestic abuse victims delay or refuse to leave their animals with the domestic abusers as their pets have been victims as well, which shows that pet abusers live in closeted abusive households where the victims are shut in.

“You cannot just say that COVID is the reason for abandonment. It is just another excuse to give up on an animal that would never have given up on you. This, despite the fact that it is a criminal offence to abandon your pet,” says Krishnaveni Srinivasan.

Pawsitive Farm Sanctuary has always taken in the animals. And with Corona abandonment cases on the rise, they are opening another sanctuary in Madh Island to house more.

“I ran a shelter for the voiceless in Madh Island, but a fellow activist to whom I lent a hand suddenly conspired with the broker and took over my shelter in the middle of the lockdown. There was no way I could leave my 30 plus cat babies, who are like my own children, out on the street, says an emotional animal activist Purnima Lamchhane. That was when Pawsitive Farm Sanctuary stepped in. We have now almost finalized a huge space where the animals can not only live in peace, but can also run and have great fun,” says Purnima.

“Animal activists like Purnima have a big heart. And they surely deserve their hand to be held at a time when they find themselves at a crossroads,” avers Anusha.

Purnima now empowers the family and is very excited to be the driving force that will open the doors of the Madh Island sanctuary to many more who need a hand. “It is rented land. But it brings with it a light of positivity, hope, love and affection. It means so much to have the children with a roof over their heads, full meals and loads of lying space,” elaborate Purnima and Anusha.

There is also this particularly worrying trend of relinquishing senior animals in recession due to increased cost of their care. People losing work or income are unable to afford pet food and wet care bills. They are also surrendering pets or requesting vets to put them to sleep. Opportunistic adoption is also quite scary.

Those who cannot commit can surely foster, for it reduces the separation anxiety or pets languishing in shelters where there is no routine or structure due to the crisis at hand.

“COVID-19 has brought with it a new norm. Isolation is life-threatening and brings with it a terribly sinking feeling. You cannot touch, hug or even get close to those who matter, or don’t for that matter. At such time, pets provide, that raft for us to stay afloat,” reasons animal activist S. Ramachandran.

Hence, while many are letting go of their pets, one should open their hearts to foster or adopt the voiceless. For, sometimes, when you give a hand to pull someone to safety, you end up rescuing yourself.

Docs stumble on surge in agoraphobia because of COVID-19