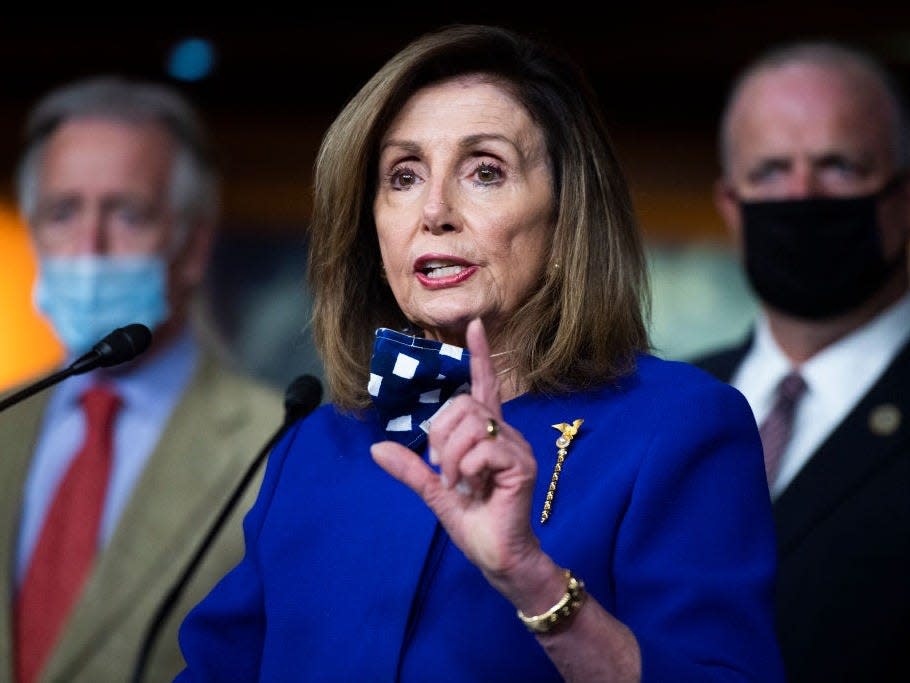 Speaker of the House Nancy Pelosi, D-Calif., conducts a news conference to call for the extension of the federal unemployment insurance in the Capitol Visitor Center to on Friday, July 24, 2020.

Democrats in May proposed the HEROES Act, which expanded existing coronavirus relief, though the GOP-controlled Senate has not voted on the legislation.

Republicans, including the president, have said they aren’t interested in extending the existing $600 weekly increase to federal unemployment insurance and instead have suggested a sliding scale that covers up to 70% of a person’s lost wages.

“We’ve been anxious to negotiate for two months and 10 days when we put forth our proposal,” Pelosi said as Republicans say they will release their proposal for Monday.

House Speaker Nancy Pelosi in an interview on Sunday said members of Congress wouldn’t return to their home districts without first passing new coronavirus relief legislation as provisions like the federal eviction moratorium and the $600 weekly increase to unemployment benefits end this month.

“Will you stay in session until a deal is negotiated?” Margaret Brennan, moderator of CBS News’ “Face the Nation,” asked Pelosi.

“We can’t go home without it,” the California Democrat responded.

Lawmakers are currently scheduled to return to their home districts at the beginning of August for the entire month, meaning time is running out for legislators to extend or replace expiring coronavirus benefits.

“We’ve been anxious to negotiate for two months and 10 days when we put forth our proposal,” Pelosi said.

In May, House Democrats unveiled another round of coronavirus relief as part of a bill known as the Health and Economic Recovery Omnibus Emergency Solutions, or HEROES, act, though the GOP-controlled Senate has yet to vote on the House-passed bill.

“These are things that the Republicans voted for in previous COVID packages,” Pelosi added. “It was nothing new — it was more because more was needed.”

As The Washington Post reported, in addition to disagreements with Democrats, infighting within the GOP has also caused delays in putting forth new legislation to support Americans in need of assistance due to economic burdens the coronavirus pandemic created.

Also Sunday, White House chief of staff Mark Meadows repeated that the White House was not interested in extending the $600 weekly increased to federal unemployment benefits, which was passed in March as part of the CARES Act. The increase was meant to supplement a person’s lost income as state benefits often make up a fraction of a person’s former wages.

“The original unemployment benefits actually paid people to stay home, and actually a lot of people got more money staying at home than they would go back to work,” Meadows said during an appearance Sunday on ABC’s “This Week.” “The president has been very clear, our Republican senators have been very clear, we aren’t going to extend that provision.”

Instead, Meadows reiterated the president and Republicans would propose a plan for unemployment benefits to cover up to 70% of an unemployed person’s lost wages, though some state officials have said the proposal for a sliding scale could create weekslong delays for people in need of such benefits.

White House economic advisor Larry Kudlow on Sunday said on Sunday Americans could expect that an upcoming round of coronavirus relief will include more $1,200 checks to Americans and would extend the federal eviction moratorium that ended Friday.

While Pelosi advocated for continuing the expansion of federal unemployment benefits, she would not say whether she would negotiate to a figure lower than the weekly $600 increase to federal benefits, which expire July 31.

“You don’t go into a negotiation with a redline but you do go in with your values,” she said.

McConnell included $600 checks in COVID-19 stimulus plans after listening to that opposition might value Republicans the Senate runoffs in Georgia, report says