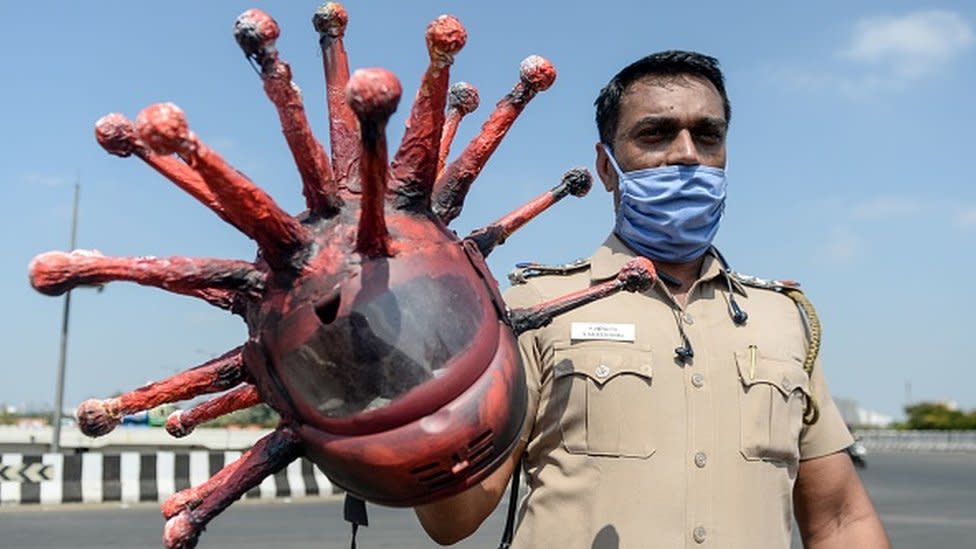 Coronavirus lockdown restrictions are being enforced by the police in India

Last week, a bedridden retiree living with his wife in the eastern Indian city of Kolkata (formerly Calcutta) began feeling feverish with a bit of tightness in his chest – tell-tale signs of Covid-19.

Satya Deo Prasad, 68, had possibly picked up the infection from his visits to a local hospital to get dialysis for his failing kidneys.

His daughter, based some 1,900km (1,180 miles) away in the western city of Pune, called a Kolkata helpline for an ambulance to pick her father up and take him to the hospital.

After three hours, an ambulance arrived. It carried no attendant and the driver parked it some distance away from Mr Deo’s house and refused to go any further.

Over the telephone, Alka Prasad begged the driver to pick her father up from the house, telling him that her 62-year-old mother was in no state to bring him to the vehicle. But to no avail.

“I am not going to touch a Covid ‘body’,” the driver said flatly. “He will have to come out and walk into the ambulance.”

The panic-stricken daughter called the helpline again, which sent another ambulance with volunteers and picked up Mr Deo later that evening.

“It took a full day to take him to hospital. Stigma attached to the disease was the primary reason,” Ms Prasad told me.

With more than one million reported infections, India has the world’s third-largest case load of Covid-19. As the virus spreads, so do fear and stigma, inflicting the rich and the poor, and pervading cities and villages.

“Fear and stigma have devoured us,” says M Mitra, a Kolkata-based homemaker whose father had tested positive for the disease.

Official posters warn of ‘danger ahead’ while signposting containment zones

At the receiving end of the stigma are people who have been infected and recovered from the disease, health workers and doctors. The United Nations says “fears, rumours and stigma” are key challenges accompanying Covid-19 globally.

In India, social stigma around the disease has led to people being labelled and discriminated against. It has forced people to hide illness, avoid tests and delay hospitalisation, often with fatal consequences. Stigma attached to quarantine has meant that people returning from isolation are often treated as outcasts. In April an incident involving an Indian Islamic organisation, Tablighi Jamaat, caused massive outrage and led to reports of Islamophobia across the country.

Such social pressure can have catastrophic consequences.

Hours after the death of her husband from Covid-19 in early July, a homemaker in Siliguri in West Bengal picked up her two children, hailed an auto-rickshaw and got off at near the nearest railway track. There, they tried to kill themselves by throwing themselves in front of a moving train, before being rescued by locals.

In many parts of their town, authorities had marked houses with Covid-19 patients by putting up bamboo barricades in front. In other parts, they put up signs like “Danger, Covid ahead”, pointing to houses with patients. “The virus is like a death sentence for many. They believe if the disease doesn’t kill you, the stigma will,” says Abhijit Chowdhury, a physician who runs Covid Care Network, comprising a group of volunteers and a helpline to tackle stigma.

Quarantine stickers outside homes in cities and towns prominently display the name of resident patients. “Nowhere in the world are such things done. We need a movement against stigmatisation,” Dr Ambarish Satwik, a Delhi-based surgeon says.

A doctor working in a Covid-19 ward in a Mumbai hospital told me bodies were piling up because relatives were refusing to collect them due to fear of contracting the infection. At crematoriums in Delhi, priests have complained that some relatives do not tell them that the deceased had died of Covid-19.

Twenty-six-year-old Amrita Panda learnt about Covid-related social exclusion the hard way after four members of her family were infected in May. Most of them had mild symptoms and were quarantined at home in Howrah, a suburb of Kolkata.

Quarantine stickers outside homes mention the name of the patients

Ms Panda’s 82-year-old grandfather, however, developed breathing problems, and had to be taken to a hospital, where he recovered after treatment.

“There were raging rumours in my neighbourhood that my father and grandfather had died of the disease. Neighbours stopped approaching us. We had to let go of our domestic maid because her other employers threatened to sack her for working at our place,” she told me.

Even after the family recovered and completed their quarantine time, neighbours have continued to avoid them. A local bank refused to let Ms Panda’s father enter its premises. “It feels that contracting the disease is a crime. Even when we go out for our chores sometimes, people shout at us and scream, look the Covid people are out and about!” says Ms Panda.

In her upscale high-rise complex in Kolkata, government official Sangeeta Banerjee Barua also faced discrimination after she tested positive after weeks of working at a quarantine centre.

“I had mild symptoms and recovered at home. But our neighbours who are doctors and engineers and teachers asked us to shut our windows, not come out in the balcony. Neighbours tell us we are high-risk even after recovery. They have made us pariahs,” she said.

In June, Dr Jagadish Hiremath tried to rent an apartment near his 100-bed hospital in the southern city of Bangalore so he could live away from his family while he treated Covid patients. “I looked at middle class apartments, luxury apartments. No landlord was willing to rent it to me because I was a doctor. They said let the pandemic end first,” he told me.

The local grocery and milk shop refused to sell to his hospital workers. When an operating room technician boarded a bus to come to work, he was asked to get off, saying the bus didn’t allow hospital workers. “It’s basically a cultural problem. The messaging about the disease has been poor. If this continues, we will have nobody left to work in the hospitals,” Dr Hiremath said.

Health workers and volunteers are at the receiving end of stigma

Many believe that screechy, over-the-top coverage of the disease by news networks and feeble communication by the government is responsible for this. The networks are full of “doomsday stories” of how the disease kills and graphic visuals of the dead, a survivor complained.

K Sujatha Rao, a former health secretary, believes the stigma is due to fear and lack of trust in the public health system. “There is no confidence in the government or health system to help people if they get the infection. The fear is of not being able to get treatment due to unaffordability. It is a fear born of an acute sense of helplessness,” she told me.

There could be cultural reasons as well. Esi Thompson, who has studied stigma in the context of Ebola, says local leaders, survivors, and community members had to be engaged as volunteers and advocates to fight stigma.

“It is of uttermost importance to be sensitive to national, social and cultural norms in communicating any health risk. It is also important to consider how information about new health risks are communicated and interpreted in the light of people’s lived realities,” Dr Thompson, a professor of health risk and communication at Indiana University Bloomington, told me.

It is not clear whether any of this is being done effectively in India as yet. “My fear is that this stigmatisation of Covid-19 will survive the vaccine and the cure,” says Pradeep Krishnatray, a former director of research and strategic planning, Johns Hopkins Center for Communication Programs. “Remember, we still continue to stigmatise leprosy in India”.

One in four Covid-19 patients suffer from a bumpy and inflamed tongue, a condition the experts are calling “Covid tongue”,…