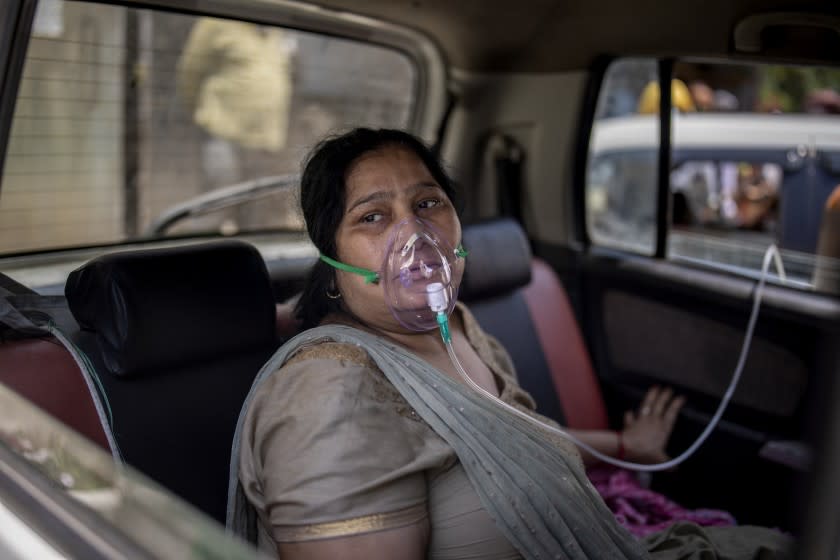 A COVID-19 patient breathes with the help of an oxygen mask in New Delhi. The oxygen was provided by a gurdwara, a Sikh house of worship. India’s medical oxygen shortage has become so dire that the gurdwara began offering free breathing sessions with shared tanks to COVID-19 patients waiting for a hospital bed. (Altaf Qadri / Associated Press)

In India, bodies of COVID-19 victims are piling up so fast that family members have to cremate them in parking lots.

In Brazil, gravediggers work through the night.

And in Germany, once a poster child for its pandemic response, the death toll has tripled in recent months and the federal government has just imposed its toughest lockdown yet.

Even as optimism abounds in the United States, where cases are in steep decline and the vaccine supply has begun to exceed the demand, the COVID-19 pandemic has reached one of its bleakest points as global vaccination campaigns sputter and new, faster-spreading variants take hold.

A record 5.7 million new cases were reported worldwide over the last week, nearly double the seven-day average in late February. The death toll — now approaching 3.1 million — grew by more than 87,000.

Those figures have increased pressure on the United States, which along with other wealthy countries has gobbled up most of the supply, to speed up vaccine production and distribution around the world.

The global surge has also raised fears that the worst of the pandemic may still be yet to come.

Only two months ago, India appeared to have a handle on COVID-19. Cities began allowing people to gather again for weddings, cricket matches and religious festivals, including Kumbh Mela, when millions of pilgrims descend on the sacred Ganges and Yamuna rivers.

The relaxing of restrictions proved disastrously premature as the number of cases exploded, buckling a healthcare system that fails to serve the nation’s needs even during normal times.

Over the last week, nearly half the world’s infections and 15% of its deaths were in India, where people waiting for medical attention were dying outside hospitals, forcing families — including that of 35-year-old homemaker Faiza Khan — to make wrenching choices.

Just a few days after Khan gave birth to a healthy baby girl in New Delhi, she started feeling short of breath.

Her family searched frantically for medical care, but hospitals were deluged and oxygen tanks were selling for $660 on the black market — $260 more than what Khan’s husband earns in a month.

The family pooled resources to buy a tank, and then made a desperate decision. They were planning to travel nearly 700 miles to a private hospital where a friend works in hopes that Khan would be able to receive treatment there.

“I’ve never seen a humanitarian crisis of this proportion in India,” said Ramanan Laxminarayan, director of the Center for Disease Dynamics, Economics and Policy, who is in Mumbai. “It’s just horrible.

“There was a sense from the government that COVID had been dealt with,” he said. “But the nature of the virus is that it loves people in close proximity.”

Mutations are also driving the surge of infections in India and elsewhere.

Research into a new variant known as B.1.617 is still in its early stages, but experts believe it may be fueling the devastation in India because it appears more contagious and more resistant to vaccines.

In Latin America, doctors blame a recent explosion of infections on the variant P.1, which emerged in the Brazilian city of Manaus before sweeping through the rest of the continent.

The variant appears to be sickening people who have already been infected by the coronavirus and recovered, meaning it is able to resist the antibodies developed in response to earlier strains.

It is also claiming lives of young people who were in good health. A new report from Brazil’s biomedical agency showed that the number of COVID-19 deaths among people between ages of 20 and 29 have surged more than 1,000% since the start of the year.

“We’re treating so many young patients and we’re seeing them dying,” said Dr. Pedro Carvalho, who works at a crowded hospital in the northeastern city of Petrolina. “They are patients with small kids whose lives were just beginning.

“As soon as a bed opens up, it fills up again,” he said. “There’s not a single pause. It’s constant, relentless.”

On a recent shift at the hospital, Carvalho worked 16 hours straight without eating or drinking water.

Vaccines have proved largely effective against the coronavirus and its mutations. But experts say that the shortage of vaccines increases the likelihood that even more dangerous variants will emerge.

“The real worry is that there’s going to be a variant that comes along that the best of our vaccines do not afford protection,” said Dr. Tim Schacker, an infectious disease expert and the vice dean for research at University of Minnesota Medical School.

In the United States, where people are planning the return of in-person school and work and spending big on travel, nearly a quarter of the population is fully vaccinated.

That figure is less than 5% in Brazil and 0.17% in Iran, the center of another large outbreak. Infections have been soaring in other countries with low vaccination rates, including Peru, Colombia and the Philippines.

A volunteer sprays disinfectant in an alley to help contain the spread of the coronavirus in Rio de Janeiro on Saturday. (Bruna Prado / Associated Press)

In India, where less than 2% of the population is fully vaccinated, health experts estimate that at the current rate it will take until the end of 2022 to fully vaccinate 70% of the country, or enough people to begin to approach herd immunity.

Seeing the positive impact of vaccination “is encouraging for the countries that have vaccines, but it’s a source of additional frustration and despair for most of the world that just does not,” said Suerie Moon, co-director of the Global Health Center at the Graduate Institute of International and Development Studies in Geneva.

She says the United States and other wealthy countries have a moral imperative but also a responsibility to their own citizens to increase the global vaccine supply.

If the pandemic continues to kill people across much of the world for years, it could delay a global economic recovery and eventually resurge through new mutations even in nations that manage to control it through vaccination.

“Here’s a clear case where the epidemiological, the economic and ethical interests all line up, which is to say, we have to do the maximum possible to get vaccines to the entire world,” Moon said.

For the world’s poorest nations, the best chance to obtain significant quantities of vaccine rests with an initiative called COVAX.

Launched by the World Health Organization and several nonprofits, it aims to promote equitable distribution of vaccines by negotiating favorable pricing with drug companies and giving all countries — rich or poor — equal access.

Yet of nearly 900 million vaccine doses shipped out globally, just 0.3% have gone to poor countries, WHO Director-General Tedros Adhanom Ghebreyesus said in a report Friday.

And in a potential setback to the effort, India recently moved to suspend exports from its Serum Institute, one of the world’s leading vaccine manufacturers, in order to increase its domestic supply.

Global health advocates have pushed for emergency measures that would allow poorer countries to manufacture and import generic versions of COVID-19 vaccines.

In October, India and South Africa asked the World Trade Organization to waive intellectual property protections for those vaccines. The proposal was opposed at the time by the United States, along with other wealthy WTO members, but health advocates are hoping that President Biden will reverse course.

The U.S. recently rejoined the WHO — which President Trump abandoned — and has pledged $4 billion to the financing body for COVAX.

“If we don’t act very fast, we could just be at the beginning of this pandemic,” said Niko Lusiani, a senior advisor with Oxfam America.

As they wait for vaccines, many countries have grown weary of the only other effective option: lockdowns and social distancing measures.

“We have an access-to-vaccines problem, we have an emerging-variants problem, but we also have an everybody-is-really-tired-of-this problem,” said Schacker, the infectious disease expert at the University of Minnesota.

That’s what appears to have happened in Germany.

Europe’s richest and most populous country was praised for its fight against the virus, with one of the world’s lowest fatality rates. In the last four months, the death toll climbed from 23,000 to more than 81,000, a rise Chancellor Angela Merkel has blamed on the reluctance of state governors to enforce lockdowns.

“We were too hesitant,” she said in January as the numbers spiraled out of control. “Then we weren’t careful enough and not fast enough.”

The government had long resisted imposing a strict curfew because of harrowing memories of limits on freedoms in Communist East Germany and during the Nazi era.

But as of Saturday, Germans were required to remain at home from 10 p.m. to 5 a.m. All shops, clubs, cafes, restaurants and gyms are closed, and only grocery stores can remain open.

In Ecuador, which suffered one of the world’s worst outbreaks of COVID-19 last spring and which is now in the grips of another outbreak, María José Cisneros blames her father’s death on fatigue over social distancing.

Marcelo Cisneros, 58, was a public official in who was in charge of shutting down parties and other gatherings that violated lockdown measures. After breaking up a particularly crowded party, he came down with a cough.

Even as his blood oxygen level dipped and his temperature spiked, the family held off on taking him to a hospital.

“I know people who lost a relative and were left with hospital debts of more than $30,000,” María José said. “It is a disease that not only kills, but also bankrupts families.”

Eventually, though, he wound up in intensive care, where he spent eight days. Just before he was intubated, Marcelo sent his family a video message, his daughter said:

“We never saw him alive again.”

With vaccines stalled, some see coronavirus speedy checks as a substitute method to return to regular