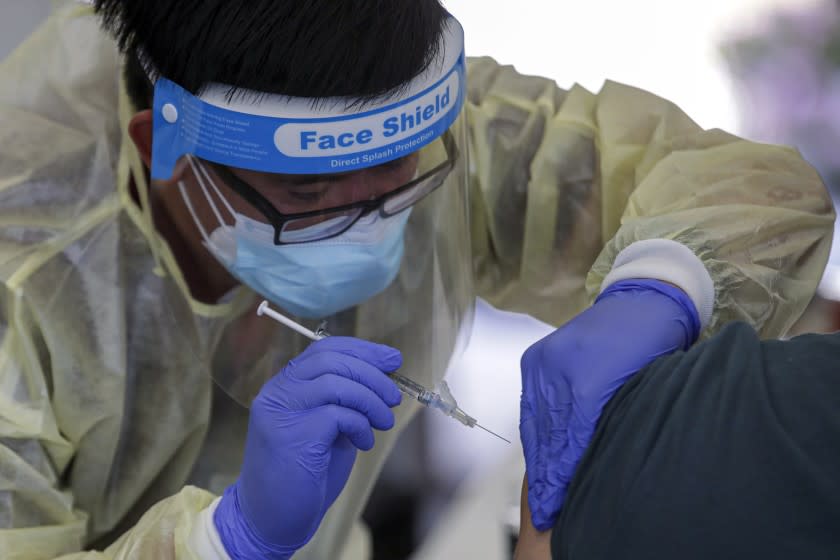 For people who have bared their arms for a two-dose COVID-19 vaccine, the message from public health officials has been clear: Get the second shot if you want full protection.

But an emerging body of evidence suggests that there may be an exception to that rule. If you’ve already battled a coronavirus infection,it’s possible that one dose may suffice.

“This has been rumored for a long time, that people with preexisting disease only need a single dose to get really long-lasting immunity,” said Dr. George Rutherford, an infectious disease epidemiologist at UC San Francisco.

Getting that second dose is essential in order to get the fullest possible protection against the virus, experts say.

There are a few exceptions to the two-dose rule — such as having an immediate or severe allergic reaction to the first dose — but so far, being a COVID-19 survivor isn’t one of them.

However, researchers are increasingly finding that a SARS-CoV-2 infection may act a lot like the first shot of the vaccine.

A study by scientists in Seattle and Montreal examined blood serum samples from people who had recovered from COVID-19 and from others who had never had a coronavirus infection. Samples were collected both before and after immunization with either the Pfizer or Moderna vaccine.

The researchers found that in the COVID-19 survivors, a single dose of vaccine boosted antibody levels against several different coronavirus variants by up to a thousandfold — and that a second dose essentially offered no additional benefit. Meanwhile, the people with no history of infection had lower antibody levels after two doses of vaccine than the previously infected people had after just one. Those findings were reported last month in the journal Science.

In another recent study, researchers in New York looked at serum samples from 110 people, some who had been infected with SARS-CoV-2 and some who had not, and analyzed how their antibody levels differed after getting the Pfizer or Moderna vaccine.

They found that after just one shot, those who had already been infected had antibody levels that were 10 to 45 times higher than those whose histories were infection-free. Moreover, with just that first dose, the COVID-19 survivors’ median antibody levels were more than six times higher than the levels in uninfected folks who completed the two-dose regimen, according to the report in the New England Journal of Medicine.

A preliminary version of those findings prompted Dr. Francis Collins, director of the National Institutes of Health, to observe that “the results raise the possibility that one dose might be enough for someone who’s been infected with SARS-CoV-2 and already generated antibodies against the virus.” However, he added in a blog post, “much more research is needed — and I am definitely not suggesting a change in the current recommendations right now.”

The New York scientists also found that people who had previously been infected tended to have more symptoms after their first shot compared with their never-infected peers. They were also more likely to report other less common vaccine side effects, including headache, fatigue, fever, chills, muscle aches and joint pain.

France’s health authority has already issued a recommendation that those who had a confirmed SARS-CoV-2 infection take just one dose of vaccine, even if their infection didn’t result in symptoms of COVID-19.

Collins suggested the U.S. Food and Drug Administration might follow suit if the evidence continues to build. Such a policy could help extend vaccine supply and get more people immunized more quickly, he wrote.

“But any serious consideration of this option will require more data,” he added. “It will also be up to the expert advisors at FDA and Centers for Disease Control and Prevention (CDC) to decide.”

Rutherford said it’s possible such a move might be coming, but that the CDC “has got a lot on its plate.”

Dr. Amesh Adalja, a senior scholar at the Johns Hopkins Center for Health Security, said that while the evidence is growing, the CDC “is very cautious” and may be waiting for more research before supporting the change.

“What you would be doing is also changing the definition of a fully vaccinated person,” he said. For people with past infections, that would get them several weeks closer to the day when they can visit other fully vaccinated people indoors without wearing masks or practicing physical distancing, among other benefits outlined by the CDC.

But in some cases, determining who has had a past infection may be easier said than done, Adalja said. Officials would have to decide what kinds of test results — past or present — would qualify as proof.

“Is that going to be something they can operationally execute — to say, ‘OK, this person has an antibody test that shows that they’re positive, and that’s enough for us to say this person can be fully vaccinated after a single dose’? And I think that becomes the issue — do people have to dig up that document to say that?” he said.

If they can work out the details, a policy change would reduce the risk of vaccine shortages. While that may not be a big threat in the U.S., which has ordered more than enough doses to vaccinate all its citizens, it certainly affects many other countries around the world that are still waiting for their doses to arrive.

“If you can spare all those people a second dose, that’s more doses for the rest of the world and also a quicker rollout of first doses in this country,” Adalja said.