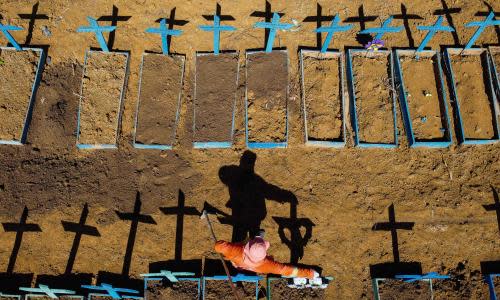 For months Natalia Pasternak has implored Brazilians to take science and coronavirus seriously, in a marathon of TV appearances, newspaper columns, live streams and podcasts.

“I’ve given interviews at 2am,” said the microbiologist and broadcaster who runs a civil society group called the Question of Science Institute.

As the epidemic has raged, Pasternak has condemned President Jair Bolsonaro’s chaotic, anti-scientific response; denounced fake news and unproven treatments such as chloroquine and ozone therapy; and urged her country’s 210 million citizens to respect quarantine measures aimed at controlling coronavirus.

“Reopening … is a recipe for disaster,” the 43-year-old scientist warned on a recent talkshow, as lockdown efforts withered despite the soaring number of infections and deaths.

Yet five months after Brazil’s first confirmed fatality, Pasternak is despondent and fears her work has been in vain.

On Saturday the official death toll hit 100,000 – up from 10,000 in early May. A similar number of lives were lost during Sri Lanka’s 26-year civil war or the ongoing conflict in Yemen. Brazil has recorded more than 3m infections – second only to the US.

“We failed – as a country, as a government, as a society – to get the message out in a clear, transparent and educative way,” she admitted.

Like many Brazilians, Pasternak blames Bolsonaro – a Trump-smitten populist who calls Covid-19 “a bit of a cold”, has lost two health ministers during the crisis and has sabotaged containment measures he claims are too damaging to the economy.

“As president, he bears personal responsibility. His behaviour has been deplorable,” the pro-science campaigner said.

“It really disgusts me to see my country go through this. To have the worst possible leadership at the worst moment possible … As a scientist and a citizen, I find it so sad to think how this government has wrecked my country,” she added, her voice breaking.

Pasternak is part of an outspoken and vibrant community of scientists, journalists and opinion-makers battling to convey the gravity of Brazil’s crisis and identify possible escape routes.

Since March she has sounded the alarm – and petitioned the government – by penning more than 50 articles, appearing on 19 podcasts and giving nearly 300 interviews. “My role is to do everything I can to inform the population about how science works and why we need to trust science to guide our decisions … because science is the best tool we have to fight this pandemic.”

But with Bolsonaro championing ineffective treatments such as hydroxychloroquine and snubbing social distancing, it has been an uphill struggle.

“He’s set an awful example that has confused the population over the true seriousness of the pandemic and the solutions that actually work,” Pasternak complained.

“If we had implemented decent quarantine measures, we could have avoided at least half of these 100,000 deaths,” she claimed, remembering how in March an Imperial College projection claimed urgent action could keep Brazil’s death toll down to 44,000.

“We’re now at more than double this – and we are still in the middle of the pandemic.”

Bolsonaro administration officials and supporters put a more positive spin on his response.

“Brazil didn’t do as bad a job as some boast,” the pro-Bolsonaro governor of its second most populous state, Minas Gerais, insisted earlier this month.

An Orwellian federal government propaganda campaign called the Placar da Vida (“The Scoreboard of Life”) trumpets the number of people “saved” by its efforts – but skips over the dead.

President Jair Bolsonaro greets supporters outside his official residence the Alvorada Palace, in Brasília, on 24, after he tested positive for coronavirus earlier that month. Photograph: Eraldo Peres/AP

Despite this, many regions are reopening, with Rio beaches packing, shoppers flocking to malls and social isolation rates plummeting.

“The danger is that we normalize this – that we reach a point where people say: ‘Oh, it’s stabilized. Everything’s OK. It’s over!’” Pasternak warned. “No – it’s not over. It’s not normal for 1,000 people to die each day because of an infectious disease.

“Our role as science communicators … is to keep showing the facts and in a way that engages people, moves people and makes them realize that this is still happening.”

Pasternak’s institute is one of several groups trying to raise awareness.

Since April, an online memorial called Inumeráveis (Countless) has celebrated victims’ lives as a way of emphasizing the epidemic’s human cost.

“We are trying to fight this [trivialisation] with love,” said Rayane Urani, the project’s 31-year-old moderator.

In recent days it has commemorated 29-year-old Cleyton Barbosa da Silva Souza (“a ladies’ man who couldn’t stay alone for long”), 73-year-old Eduardo Orlando das Neves (“the owner of a moustache which changed colour when he ate açai”) and Helen Dias, 38 (“a dedicated nurse who was a star and saved many lives”).

“These aren’t just numbers. They were somebody’s dad. Somebody’s mum. Somebody’s love,” said Urani. “Ultimately, this is all about people.”

As Brazil passed its latest cruel milestone, Pasternak said she was disheartened to think things could have been different.

A vast network of national health service community health workers could have been mobilized to educate Brazilians, isolate people based on their symptoms and trace their contacts.

A proper quarantine could have been implemented, like in Germany and New Zealand, “and we would now be in the same place as these countries – reopening safely, with a near-normal life.

“[But] we don’t have guidelines, we don’t have leadership – we don’t even have a [permanent] health minister. The federal government is being absurdly negligent … and this is one of the biggest reasons Brazil now finds itself in this situation.”

Greater than half of California’s incarcerated firefighters are underneath lockdown as coronavirus sweeps by way of state prisons, leading to a scarcity of crews in fireplace season