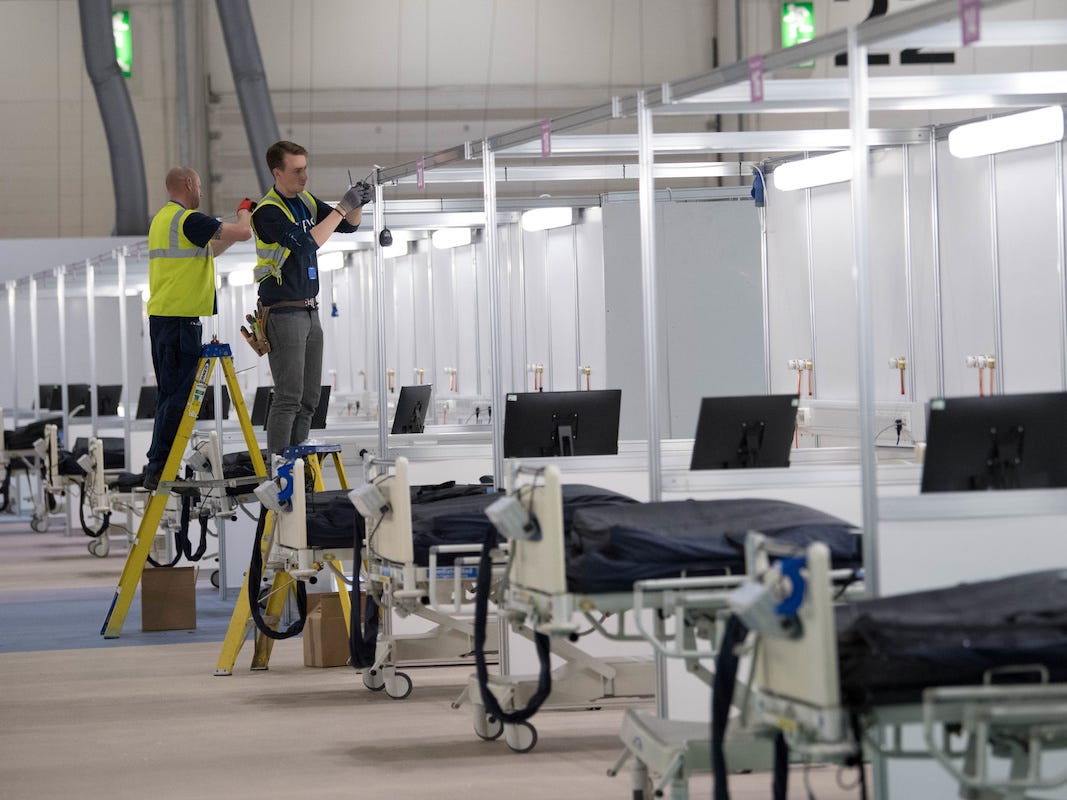 A view of London’s Nightingale hospital under construction. The makeshift hospital was built to accommodate excess coronavirus patients.

A Financial Times analysis of the excess death rates of 13 countries compared to when they imposed a lockdown has shown a close correlation between the two factors.

The data suggests that the less widespread the virus was when a country locked down, the lower the excess death rates.

For example, the UK waited until later in the severity of its outbreak before locking down, and now shows a high excess death rate. The opposite is true of Germany.

A new analysis of 13 countries has shown a correlation between the date of a country’s coronavirus lockdown and the number of excess deaths it records.

In a graph published by the Financial Times (FT), a broad trend was found between countries that imposed restrictions sooner after the virus arrived, and a reduced excess death rate.

This connects countries that allowed the virus to spread longer before locking down — such as the UK — to their high excess fatality rates from the virus.

It is by no means a causative correlation, as other factors could come into play, such as the robustness of the country’s health system, or availability of PPE.

The FT conducted the study with excess deaths — the difference between the current number of deaths recorded and the expected number of deaths at this time — instead of with countries’ reported coronavirus death numbers, which could be lower.

The FT analysis found that countries such as Germany and Chile — which locked down quickly the coronavirus hit, and while they had relatively few infections — are tied to much lower excess death rates.

For example, Germany imposed a lockdown on March 23, when some 29,000 cases had been confirmed, according to statistics website Worldometer.

Prime Minister Boris Johnson speaks during a news conference on March 22, 2020, the day before the country went into lockdown.

In the UK, which did not launch a comprehensive testing program, it is unknown exactly how many people had the virus at the time of its lockdown.

However, the FT analysis estimated that more than 20 people per million had the virus at the time the country initiated its lockdown, compared to fewer than 10 per million in Germany.

As of Thursday, the UK has reported 37,542 coronavirus deaths, and is has the worst mortality rate per head of population in the world, according to the FT.

Germany’s notably low death rate can also be attributed to other factors, such as mass testing and a robust healthcare system.

German Chancellor Angela Merkel in Berlin on May 6, 2020.

The FT analysis, which uses excess deaths, is a different measure to counting the number of coronavirus deaths reported by each country. These have variations in methodology and definitions.

The “excess deaths” measure takes into account a country’s average death rate over five years, and subtracts that from recorded deaths overall.

It points to anyone who died directly or indirectly from the virus, and tends to produce much higher numbers than official reports.

For example, until April 23, the UK’s most prominent daily announcements of coronavirus deaths initially only counted those that happened in hospitals, with a lag before deaths in places like care homes were announced, according to The Guardian.

Care home deaths accounted for around a quarter of the UK’s overall coronavirus death count as of May 19, the BBC reported.

In an April 30 media briefing, Prime Minister Boris Johnson appeared to recognize that a direct country-by-country reported death rate is not an ideal metric.

He endorsed calculating by excess deaths — as the FT has done — albeit when the UK outbreak is over.

“I think that the only real test, [the only] real comparison is going to be possible at the end of the epidemic when you look at total excess deaths,” he said.