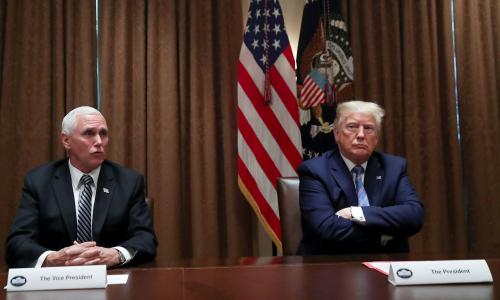 Shortly after the Trump campaign again insisted its first campaign rally since March would go ahead in Tulsa this weekend, it was reported that Oklahoma confirmed 591 new coronavirus cases on Monday, a 7.7% increase and the highest in the US.

Related: The US is officially in recession thanks to the coronavirus crisis | Jeffrey Frankel

The news, reported by Yahoo and citing an internal document from the federal Centers for Disease Control and Prevention (CDC), came after Mike Pence, who will attend the rally, falsely claimed that “in a very real sense” Oklahoma had “flattened the curve” of new Covid-19 infections.

“Today their hospital capacity is abundant,” said the vice-president, who leads the White House coronavirus taskforce, at a cabinet meeting on Monday. “The number of cases in Oklahoma has declined precipitously and we feel very confident going forward with the rally this coming weekend.”

That is not true. Nor was it true when Pence said it.

On Saturday, Oklahoma reported its then highest daily total of new cases, 225, since the pandemic began. On Sunday, Tulsa county reported its largest single-day increase since early March. On Monday, state statistics showed the seven-day rolling average for new cases in Tulsa was 65, up on a previous peak of 26 in early April.

Before news of the CDC figures on Tuesday, researchers at Johns Hopkins University in Maryland recorded 8,417 total cases in Oklahoma and 359 deaths.

Ali Mokdad, a creator of the model at the University of Washington, said: “Increased mobility and premature relaxation of social distancing led to more infections, and we see it in Florida, Arizona and other states.

The Republican party has abruptly moved the main events of its August national convention from North Carolina to Florida, because of the prospect of fewer coronavirus-related restrictions there.

But Florida has seen four days in the last six of record levels of new Covid-19 infections.

Meanwhile Oklahoma is among states which have reopened since late May. The Trump rally in Tulsa will be a showpiece event as the administration seeks to reopen an economy battered by the outbreak.

The Trump campaign clarified that Pence did not mean the rally might be switched from the indoor BOK Center in an attempt to mitigate possible coronavirus spread, but was instead indicating extra venues to meet demand.

Attendees must sign a waiver, clearing the campaign of responsibility should they contract coronavirus.

The event has already been moved back a day to avoid a clash with Juneteenth, the day when African Americans celebrate the end of slavery, during nationwide protests over police brutality and racism.

On Monday Bruce Dart, Tulsa’s chief public health officer, told the World: “I want people to be safe, and it hurts my heart to think that there’s a potential that we’re going to have something here where people become exposed to an illness. We’ve seen how devastating it’s been across the board in this country, and I don’t want it to happen to anybody here.”

Trump, meanwhile, claimed “Almost One Million people request tickets”. The BOK Center venue holds 19,000. A convention center nearby will extend capacity to around 62,000. Brad Parscale, campaign manager, perhaps indicated the true purpose of the promotional effort when he heralded the “biggest data haul and rally signup of all time by 10x”.

On Monday, as reports circulated of donors in New Jersey being stringently tested before being ushered into Trump’s presence, Parscale said of the rally: “Before entering each guest will get: Temperature check, Hand sanitizer, Mask.”

But use of the masks and attempt to socially distance will reportedly be optional.

Public health experts including Dr Anthony Fauci say the US may avoid a second wave of the virus if people take precautions including wearing masks and maintaining social distancing rules. Trump has refused to wear a mask in public.

“It is in the United States. It is in Oklahoma,” Stitt said on Monday. “And we can’t let [coronavirus] dictate our lives. We have to go about our lives, but we are going to do it with every precaution possible.”

And at the White House, Trump said: “If we stop testing right now we’d have very few cases, if any.”

Texas hit onerous by the coronavirus