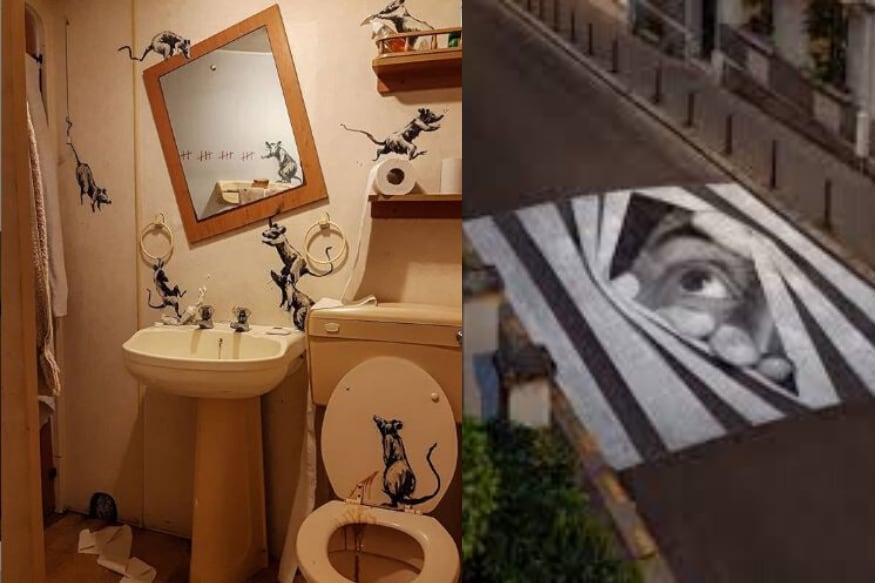 In normal times, their canvas is the great urban outdoors, their collages and mosaics speaking to passers-by from city walls.

But like everyone else, street artists must now stay home.

Despite long inhabiting a legal grey area, the majority of urban art creators have taken COVID-19 isolation measures to heart, choosing to work online and from home, sometimes revisiting old work with a confinement-inspired twist.

The most famous of them all, Britain’s Banksy, has stuck to the letter of the law, having his trademark rats run riot in his bathroom, with one taking a tinkle on his toilet seat.

“My wife hates it when I work from home,” was the droll caption to his Instagram post.

But for a few, old habits die hard.

French street art star JR covered the deserted Paris street outside a friend’s apartment with a trompe-l’oeil image of a person peeking through blinds for the cover of this week’s Time magazine.

“We couldn’t do it with permits because everything is shut down, so we decided to just do it the old way, old school” in the wee small hours of the morning, said the artist, who has spent the lockdown delivering food to the homeless for the Refettorio charity.

But he appears to be a high-profile exception.

Invader, whose “space invaders” mosaics live on city walls worldwide, took to Instagram with a piece he created on a wall of a Paris hospital featuring popular television character Dr. House.

“I made this… four years ago but it has never been as relevant as nowadays,” he said.

“Big up to the doctors and all the people who work in hospitals and who save lives.”

And he isn’t the only one whose old work has been given a fresh perspective by events.

American artist Eddie Colla’s collage of a woman wearing a mask surrounded by Chinese characters is being shared anew after haunting Paris walls for eight years.

“For me the piece is about isolation and fear and when your external environment becomes the thing that threatens your existence,” said Colla, who prefers to base himself in France but is currently stuck in California.

“It does touch upon a lot of the same issues. It was just a time when they weren’t as relevant,” he told AFP by Skype.

The same is true for Ender, whose angels, gargoyles and children populate the walls of central and eastern Paris. “The work I did over the past year goes completely with what we are living through now,” he told AFP.

His collage of a blindfolded girl hunkered down holding her knees now appears on his Instagram feed with the caption “Confinement”.

“She is oppressed, just like the current atmosphere.” Under the figure is a sticker with the word “fragile” — also the name of the series of works by Ender that deals with vulnerability.

For Ender, like his colleagues, bending the rules to get back to the streets is unthinkable — even if staying in is affecting his creative flow. “I need to walk around to have ideas. And right now that’s pretty complicated.”

Isolation has had the opposite effect on Angel Crow. In his Paris apartment, work is piling up — some of which is related to the virus. “I have many things to put up because I’ve kept on creating this whole time,” he said, showing his paintings he has composed of characters behind bars or even a “man-virus”.

The artist first tackled the subject “when the virus was gaining ground in the world” in February.

A larger-than-life collage in the Marais district entitled “Senor cuervo senora peste” (“Lord Raven, Lady Plague”) — now partially destroyed — features a character dressed as a doctor during the Black Death. It was the last thing he put up before confinement was imposed.

Unable to hunt for beauty in the streets, fans of urban art are looking to social networks to get their fix. “People are re-posting photos they’ve taken in previous months — which is great for us, because we can show our work in another way,” said Ender.

And the art world itself is going virtual with digital exhibitions, including one featuring Eddie Colla. “That will be kind of a first,” he said. “Artists will have their work but there’ll be no opening and no physical gallery. The gallery is in Berlin,” he said before adding, “Not that it matters.”

Artists hope that by not putting new work outside they are also contributing to the effort to stay at home.

An idea that Invader has taken even further. People who use his Flash Invaders game app to catalogue his mosaics in the streets now get surprise warning messages referencing the new rules like, “Safer at home” or “There’s no place like…”

Even more to the point, one message simply reads, “Respect the confinement!”