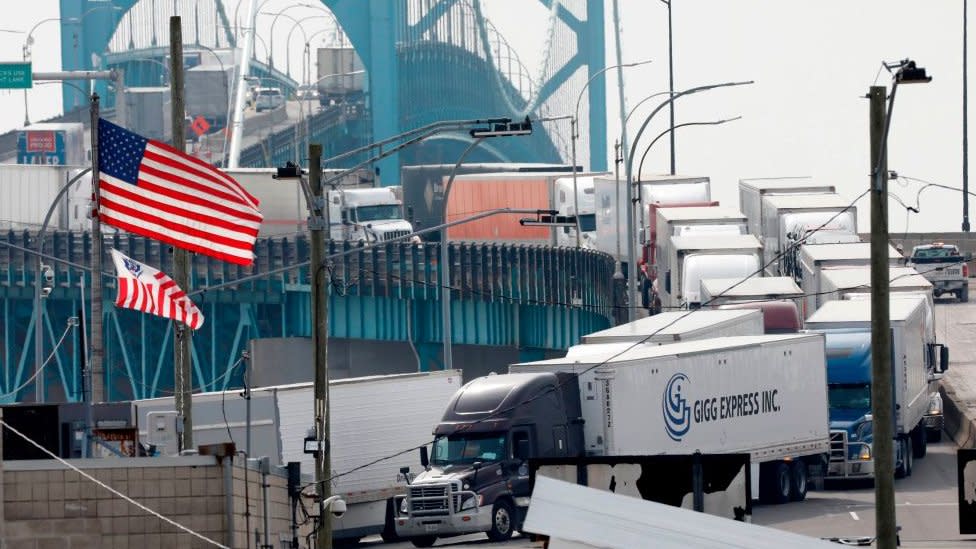 Canadian truck drivers may get vaccine access down south

The US state North Dakota is helping out its northern neighbours by offering vaccines to truck drivers crossing the border from Canada’s Manitoba province.

This first cross-border vaccination programme between the two countries comes as Canada continues to lag far behind in its vaccination efforts.

Between 2,000 and 4,000 Manitoba truck drivers, who are considered essential workers, are expected to take part.

The scheme may expand to include energy workers who travel often to the US.

Since March 2020, the US-Canada land border has been closed to all non-essential travel. But the transport of goods between the two countries – which share one of the world’s largest trade partnerships – has continued.

“The US has got a lot of vaccines and Canada’s got less,” North Dakota Governor Doug Burgum said on Tuesday, announcing the programme.

“We want to do our part to help those essential workers from Canada who are frequently travelling through our state,” he said.

The US Centers for Disease Control and Prevention (CDC) told North Dakota health officials there is no prohibition on vaccinating non-US Citizens, the governor’s office said.

The vaccinations will be provided at no cost and will be available through appointments. Some 21 Canadian residents have been vaccinated so far, said Mr Burgum.

North Dakota will be offering the Pfizer and Moderna vaccines and – if it is approved again – the Johnson & Johnson vaccine.

Manitoba has given at least one dose to just one quarter of its adult population. In North Dakota, 560,000 doses have been administered to its population of 760,000, according to Governor Burgum.

This gap is mirrored nationally.

In Canada, less than 3% of the population is fully vaccinated.

One quarter of the US population has been fully vaccinated and nearly 40% have been given at least one shot according to data compiled by Bloomberg. And as of Tuesday, all US adults are eligible for Covid-19 vaccines.

Canada’s bumpy vaccine rollout has been met with a menacing third wave of Covid-19, fuelled by a surge in variants.

On Tuesday – the day the program was announced – Manitoba reported its highest daily Covid-19 case count since January.

“The reality of Covid in Canada today is such that the variants of concern are here, the third wave is here, but the vaccines are not here yet,” said Manitoba Premier Brian Pallister this week.

On Wednesday, President Joe Biden said he spoke with Prime Minister Justin Trudeau about vaccine assistance, though he noted the US was not yet able to send extra doses.

“We hope to be able to be of some help and value to countries around the world. We talked to our neighbours,” he told reporters.

Missouri hairstylist may have exposed 91 people to Covid-19, officials say